It showed that 5,308,483 people were living in the United States, of whom 893,602 were enslaved. The 1800 census included the new District of Columbia. The census for the following states were lost: Georgia, Kentucky, New Jersey, Tennessee, and Virginia.

The 1800 census asks the following information in columns, left to right: [1]

This census is one of the several for which some of the original data are no longer available. Original census returns for Georgia, Kentucky, Mississippi, New Jersey, Tennessee, and Virginia were lost over the years. [2]

No microdata from the 1800 population census are available, but aggregate data for small areas, together with compatible cartographic boundary files, can be downloaded from the National Historical Geographic Information System.

^  b: Persons 766 added to the particular items of this return.

^  c: This return has been received since the communication of the above Aggregate to Congress.

^  d: This return has also been since received, and is stated by the Marshal to be more correct than the first. [4]

In the United States a county is an administrative or political subdivision of a state that consists of a geographic region with specific boundaries and usually some level of governmental authority. The term "county" is used in 48 U.S. states, while Louisiana and Alaska have functionally equivalent subdivisions called parishes and boroughs, respectively.

Race and ethnicity in the United States census, defined by the federal Office of Management and Budget (OMB) and the United States Census Bureau, are the self-identified categories of race or races and ethnicity chosen by residents, with which they most closely identify, and indicate whether they are of Hispanic or Latino origin. 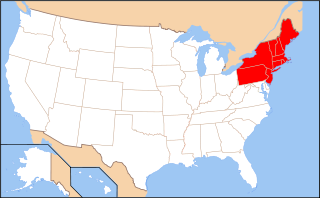 The United States census is a census that is legally mandated by the US Constitution, and takes place every 10 years. The first census after the American Revolution was taken in 1790, under Secretary of State Thomas Jefferson; there have been 23 federal censuses since that time.

In the United States before 1865, a slave state was a state in which slavery and the slave trade were legal, while a free state was one in which they were not. Between 1812 and 1850, it was considered by the slave states to be politically imperative that the number of free states not exceed the number of slave states, so new states were admitted in slave–free pairs. There were, nonetheless, some slaves in most free states up to the 1840 census, and the Fugitive Slave Act of 1850 specifically stated that a slave did not become free by entering a free state.

The eastern United States, commonly referred to as the American East, Eastern America, or simply the East, is the region of the United States lying to the east of the Mississippi River. In some cases the term may refer to a smaller area.

Tri-state area is an informal term in the eastern contiguous United States for any of several populated areas associated with a particular town or metropolis, that with adjacent suburbs, lies across three states. Some of these involve a state boundary tripoint. Other tri-state areas have a more diffuse population that shares a connected economy and geography—especially with respect to geology, botany, or climate. The term "tri-state area" is often present in radio and television commercials.

The United States census of 1820 was the fourth census conducted in the United States. It was conducted on August 7, 1820. The 1820 census included six new states: Louisiana, Indiana, Mississippi, Illinois, Alabama and Maine. There has been a district wide loss of 1820 census records for Arkansas Territory, Missouri Territory and New Jersey.

The District of Columbia is a federal district with an ethnically diverse population. In 2018, the District had a population of 702,455 people, with a resident density of 11,515 people per square mile.