The United States census of 1890 was taken beginning June 2, 1890, but most of the 1890 census materials were destroyed in 1921 when a building caught fire and in the subsequent disposal of the remaining damaged records. It determined the resident population of the United States to be 62,979,766—an increase of 25.5 percent over the 50,189,209 persons enumerated during the 1880 census. The data reported that the distribution of the population had resulted in the disappearance of the American frontier. This was the first census in which a majority of states recorded populations of over one million, as well as the first in which multiple cities— New York as of 1880, Chicago, and Philadelphia —recorded populations of over one million. The census also saw Chicago rise in rank to the nation's second most populous city, a position it would hold until Los Angeles (then 57th) would supplant it in 1990. This was the first U.S. census to use machines to tabulate the collected data.

The 1890 census collected the following information: [1]

The 1890 census was the first to be compiled using methods invented by Herman Hollerith and was overseen by Superintendents Robert P. Porter (1889–1893) and Carroll D. Wright (1893–1897). Data was entered on a machine readable medium (punched cards) and tabulated by machine. [2] Changes from the 1880 census included the larger population, the number of data items to be collected from individuals, the Census Bureau headcount, the volume of scheduled publications, and the use of Hollerith's electromechanical tabulators. The net effect of these changes was to reduce the time required to process the census from eight years for the 1880 census to six years for the 1890 census. [3] The total population of 62,947,714, the family, or rough, count, was announced after only six weeks of processing (punched cards were not used for this tabulation). [4] [2] : 61  The public reaction to this tabulation was disbelief, as it was widely believed that the "right answer" was at least 75,000,000. [5]

The 1890 census announced that the frontier region of the United States no longer existed, [7] and that the Census Bureau would no longer track the westward migration of the U.S. population.

By 1890, settlement in the American West had reached sufficient population density that the frontier line had disappeared. For the 1890 census, the Census Bureau released a bulletin declaring the closing of the frontier, stating: "Up to and including 1880 the country had a frontier of settlement, but at present the unsettled area has been so broken into by isolated bodies of settlement that there can hardly be said to be a frontier line. In the discussion of its extent, its westward movement, etc., it can not, therefore, any longer have a place in the census reports." [8]

The original data for the 1890 census is mostly unavailable. The population schedules were damaged in a fire in the basement of the Commerce Building in Washington, D.C. in 1921. Some 25% of the materials were presumed destroyed and another 50% damaged by smoke and water (although the actual damage may have been closer to 15–25%). The damage to the records led to an outcry for a permanent National Archives. [9] [10] In December 1932, following standard federal record-keeping procedures, the Chief Clerk of the Bureau of the Census sent the Librarian of Congress a list of papers to be destroyed, including the original 1890 census schedules. The Librarian was asked by the Bureau to identify any records which should be retained for historical purposes, but the Librarian did not accept the census records. Congress authorized destruction of that list of records on February 21, 1933, and the surviving original 1890 census records were destroyed by government order by 1934 or 1935. Few sets of microdata from the 1890 census survive,. [11] Aggregate data for small areas, together with compatible cartographic boundary files, can be downloaded from the National Historical Geographic Information System.

Herman Hollerith was a German-American statistician, inventor, and businessman who developed an electromechanical tabulating machine for punched cards to assist in summarizing information and, later, in accounting. His invention of the punched card tabulating machine, patented in 1884, marks the beginning of the era of mechanized binary code and semiautomatic data processing systems, and his concept dominated that landscape for nearly a century.

A punched card is a piece of stiff paper that holds digital data represented by the presence or absence of holes in predefined positions. Punched cards were once common in data processing applications or to directly control automated machinery.

The United States census is a census that is legally mandated by the U.S. Constitution, and takes place every 10 years. The first census after the American Revolution was taken in 1790, under Secretary of State Thomas Jefferson; there have been 23 federal censuses since that time.

Electronic data processing (EDP) can refer to the use of automated methods to process commercial data. Typically, this uses relatively simple, repetitive activities to process large volumes of similar information. For example: stock updates applied to an inventory, banking transactions applied to account and customer master files, booking and ticketing transactions to an airline's reservation system, billing for utility services. The modifier "electronic" or "automatic" was used with "data processing" (DP), especially c. 1960, to distinguish human clerical data processing from that done by computer.

Starting at the end of the nineteenth century, well before the advent of electronic computers, data processing was performed using electromechanical machines collectively referred to as unit record equipment, electric accounting machines (EAM) or tabulating machines. Unit record machines came to be as ubiquitous in industry and government in the first two-thirds of the twentieth century as computers became in the last third. They allowed large volume, sophisticated data-processing tasks to be accomplished before electronic computers were invented and while they were still in their infancy. This data processing was accomplished by processing punched cards through various unit record machines in a carefully choreographed progression. This progression, or flow, from machine to machine was often planned and documented with detailed flowcharts that used standardized symbols for documents and the various machine functions. All but the earliest machines had high-speed mechanical feeders to process cards at rates from around 100 to 2,000 per minute, sensing punched holes with mechanical, electrical, or, later, optical sensors. The operation of many machines was directed by the use of a removable plugboard, control panel, or connection box. Initially all machines were manual or electromechanical. The first use of an electronic component was in 1937 when a photocell was used in a Social Security bill-feed machine. Electronic components were used on other machines beginning in the late 1940s.

Dehomag was a German subsidiary of IBM with a monopoly in the German market before and during World War II. The word was an acronym for Deutsche Hollerith-Maschinen GmbH. Hollerith refers to the German-American inventor of the technology of punched cards, Herman Hollerith. In April 1949 the company name was changed to IBM Deutschland. 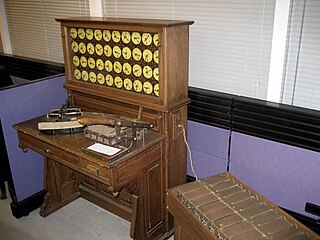 The United States census of 1870 was the ninth United States census. It was conducted by the Census Bureau from June 1, 1870, to August 23, 1871. The 1870 census was the first census to provide detailed information on the African-American population, only five years after the culmination of the Civil War when slaves were granted freedom. The total population was 38,925,598 with a resident population of 38,558,371 individuals, a 22.6% increase from 1860. The 1870 census' population estimate was controversial, as many believed it underestimated the true population numbers, especially in New York and Pennsylvania.

The United States census of 1940, conducted by the Census Bureau, determined the resident population of the United States to be 132,164,569, an increase of 7.3 percent over the 1930 population of 122,775,046 people. The census date of record was April 1, 1940. A number of new questions were asked including where people were five years before, highest educational grade achieved, and information about wages. This census introduced sampling techniques; one in 20 people were asked additional questions on the census form. Other innovations included a field test of the census in 1939. This was the first census in which every state (48) had a population greater than 100,000.