South Kingstown includes the villages of Kingston, West Kingston, Wakefield, Peace Dale, Usquepaug, Snug Harbor, Tuckertown, East Matunuck, Matunuck, Green Hill, and Perryville. Peace Dale and Wakefield are treated as a census-designated place called Wakefield-Peacedale. Ocean Ridge, Indian Lake, Curtis Corner, and Torrey Hill are among the other small areas that are regarded as unique localities, although official distinctions are less clear. Middlebridge, located on the west side of Narrow River, is a densely populated neighborhood in the town.

South Kingstown is bordered on the south by Block Island Sound.

There were 9,268 households, out of which 34.0% had children under the age of 18 living with them, 56.4% were married couples living together, 9.4% had a female householder with no husband present, and 31.0% were non-families. 24.2% of all households were made up of individuals, and 9.6% had someone living alone who was 65 years of age or older. The average household size was 2.56 and the average family size was 3.07.

Art galleries include the Hera Gallery (Wakefield), South County Art Association (Kingston), and sometimes the Courthouse Center for the Arts (or CCA, West Kingston). Theaters include The Contemporary Theatre (Wakefield), the Theatre-by-the-Sea (Matunuck), and the CCA. The sole cinema is South County Cinema 8 (Wakefield), which replaced the independently run Campus Cinema (Wakefield) in the early 2000s. There are numerous venues for music and other entertainment, including the University of Rhode Island's Ryan Center and smaller venues such as Lily Pads (Peace Dale), and the CCA.

Arts and cultural education is also offered through community centers like The Guild and the Senior Center in Wakefield. There are also three public libraries which are located in Kingston, Matunuck, and Peace Dale.

The South County History Center, located in the village of Kingston, is located in a former jail building and contains a collection of fine Early American artifacts. The Peace Dale Museum of Art and Culture in the village of Peace Dale in South Kingstown holds in its collections artifacts of the local Narragansett People and from indigenous cultures around the world. [7]

South Kingstown is the location of the deadly Great Swamp Fight that occurred during King Philip's War in 1675. The battle site is commemorated by a rough granite shaft about twenty feet high. Around the mound on which the shaft stands are four granite markers engraved with the names of the colonies which took part in the battle. [8] South Kingstown is home to 31 sites listed on the National Register of Historic Places, 4 of which are historic districts. A driving tour is described by the Pettaquamscutt Historical Society. [9]

All 5 seats on the town council are at-large seats that are up for election every 2 years, with no term limits. After each election, the newly elected council members elect two of their own as president and vice president. The current president is Abel G. Collins, and the current vice president is Rory McEntee. [13]

South Kingstown is served by the South Kingstown School District. The district includes nine schools that serve students in grades prekindergarten to twelfth. [14]

The University of Rhode Island is located in the village of Kingston. [15]

South County Hospital is located in the village of Wakefield. [18]

Rail service is provided by Amtrak via Kingston Station, which is located in the village of West Kingston. Kingston is a stop along Amtrak's Northeast Corridor and is serviced by their Northeast Regional train service. The Northeast Regional has a northern terminus with Boston's South Station with a major stop en route in Providence, and has a southern terminus with Washington's Union Station with major stops en route in New Haven, New York City, Philadelphia, Wilmington, and Baltimore. 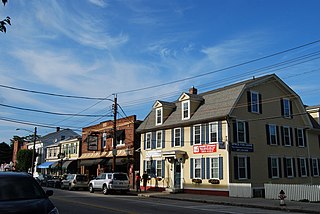 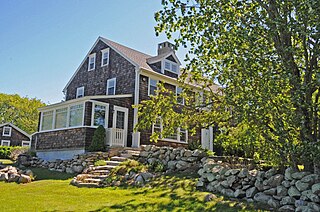 Charlestown is a town in Washington County, Rhode Island, United States. The population was 7,997 at the 2020 census.

Exeter is a town in Washington County, Rhode Island, United States. Exeter extends east from the Connecticut border to the town of North Kingstown. It is bordered to the north by West Greenwich and East Greenwich, and to the south by Hopkinton, Richmond, and South Kingstown. Exeter's postal code is 02822, although small parts of the town have the mailing address West Kingston (02892) or Saunderstown (02874). The population was 6,460 at the 2020 census. Narragansett is a town in Washington County, Rhode Island, United States. The population was 14,532 at the 2020 census. However, during the summer months the town's population more than doubles to near 34,000. The town of Narragansett occupies a narrow strip of land running along the eastern bank of the Pettaquamscutt River to the shore of Narragansett Bay. It was separated from South Kingstown in 1888 and incorporated as a town in 1901. 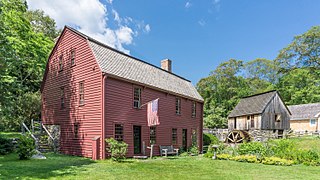 North Kingstown is a town in Washington County, Rhode Island, United States, and is part of the Providence metropolitan area. The population was 27,732 in the 2020 census. North Kingstown is home to the birthplace of American portraitist Gilbert Stuart, who was born in the village of Saunderstown. Within the town is Quonset Point, location of the former Naval Air Station Quonset Point, known for the invention of the Quonset hut, as well as the historic village of Wickford. 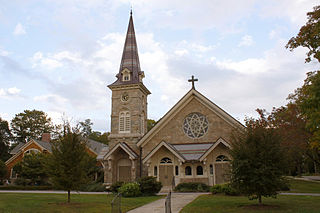 Wakefield-Peacedale is a census-designated place (CDP) in the town of South Kingstown in Washington County, Rhode Island, United States that includes the villages of Peace Dale and Wakefield. The population was 8,487 at the 2010 census.

Wakefield is a village in the town of South Kingstown, Rhode Island, United States, and the commercial center of South Kingstown. Together with the village of Peace Dale, it is treated by the U.S. Census as a component of the census-designated place identified as Wakefield-Peacedale, Rhode Island. West Kingston, another South Kingstown village, was the traditional county seat of Washington County. Since 1991, the Washington County Courthouse has been in Wakefield. The Sheriff's Office which handles corrections is also in Wakefield.

Peace Dale is a village in the town of South Kingstown, Rhode Island. Together with the village of Wakefield, it is treated by the U.S. Census as a component of the census-designated place identified as Wakefield-Peacedale, Rhode Island. 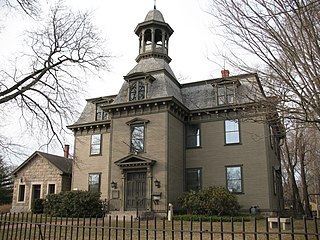 Kingston is a village and a census-designated place within the town of South Kingstown in Washington County, Rhode Island, United States, and the site of the main campus of the University of Rhode Island. The population was 6,974 at the 2010 census. Much of the village center is listed on the National Register of Historic Places as Kingston Village Historic District. It was originally known as Little Rest. 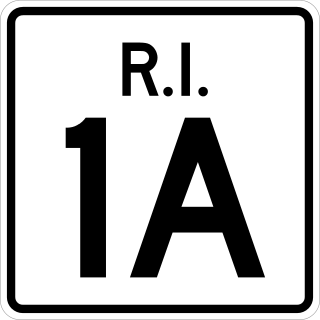 Route 1A, largely signed as Scenic 1A, is a 33.3-mile (53.6 km) long numbered state highway located in Washington County, Rhode Island, United States. The route, which parallels U.S. Route 1 for its entire length, has four distinct sections connected by US 1, two of which require median u-turn ramps to cross US 1. It travels through five towns in Washington County: Westerly, Charlestown, South Kingstown, Narragansett, and North Kingstown.

Route 108 is a 8.6-mile-long (13.8 km) state highway in Washington County, Rhode Island. The route begins at an intersection with Ocean Road in the village of Narragansett Pier, just north of Point Judith Light. The route's northern terminus is at an intersection with Route 138 in the town of South Kingstown, just east of the University of Rhode Island. In between, Route 108 connects to the Block Island Sound community of Galilee and passes through the villages of Wakefield and Peace Dale.

RISN Operations Inc., also called Rhode Island Suburban Newspapers, is a privately owned publisher of three daily newspapers and several weekly newspapers in the U.S. state of Rhode Island. The company was founded by Illinois-based newspaper executives in early 2007 to purchase the Rhode Island holdings of Journal Register Company, which it did for $8.3 million.

Independent Newspapers is an independent publisher of a weekly newspaper, The Independent, and a magazine, South County Life, in Washington County, Rhode Island.

The Pettaquamscutt River is a tidal extension of the Mattatuxet River in the U.S. state of Rhode Island. It flows approximately 6.3 miles (10.1 km). There are no dams along the river's length.

U.S. Route 1 in Rhode Island is a major north–south state highway through the U.S. state, specifically within the Providence metropolitan area. Staying close to the Atlantic Ocean and Narragansett Bay, it is a longer route than Interstate 95, and many portions are a four-lane divided highway.

The South County History Center, which formerly operated as the Pettaquamscutt Historical Society, is a nonprofit organization in Kingston, Rhode Island, United States, that preserves and interprets the material culture of South County through exhibits and study of archival, library and artifact collections.

Matunuck is a village in South Kingstown, Rhode Island, United States near Charlestown, Rhode Island. The village is located on a point along the southern Atlantic coast of Rhode Island off U.S. Route 1. The village takes its name from a Native American word meaning "lookout". The Narragansett tribe made a summer encampment at this location before the land was sold to colonists as part of the Pettaquamscutt purchase.

The Narragansett Pier Railroad was a railroad in southern Rhode Island, running 8 miles (13 km) from West Kingston to Narragansett Pier. It was built by the Hazard Family of Rhode Island to connect their textile mills in Peace Dale and Wakefield to the New York, Providence and Boston Railroad at Kingston Station as well as to ocean-going steamboats at Narragansett Pier. Passenger service ran on the line from 1876 to 1952; the line continued freight operation as a Class III railroad until 1981. Most of the right-of-way has been converted to the William C. O'Neill Bike Path.

Washington County, known locally as South County, is a county located in the U.S. state of Rhode Island. As of the 2020 census, the population was 129,839. Rhode Island counties have no governmental functions other than as court administrative boundaries, which are part of the state government.

William DeWitt Metz was an American historian specializing in Rhode Island History. He served as chairman of the Department of History at the University of Rhode Island, retiring after 45 years at the university in 1982. He was especially noted for promotion of heritage conservation and historical preservation activities throughout Rhode Island.

Wikivoyage has a travel guide for South Kingstown .
This page is based on this Wikipedia article
Text is available under the CC BY-SA 4.0 license; additional terms may apply.
Images, videos and audio are available under their respective licenses.