Last updated May 03, 2022
Region of Massachusetts in the United States

The John H. Chafee Blackstone River Valley National Heritage Corridor follows the Blackstone Valley from Worcester to Providence, Rhode Island. The corridor follows the course of the Industrial Revolution in America from its origin at the Slater Mill in Pawtucket, Rhode Island as it first spread north along the valley to Worcester, Massachusetts, and then to the rest of the nation.

The region was designated a National Heritage Corridor by Congress in November 1986, composing 25 towns and cities throughout Massachusetts and Rhode Island.

In 2011, a report recommended the region for National Park status. [1] In 2014, the Blackstone River Valley National Historical Park was established. [2]

The river is named after William Blackstone (original spelling William Blaxton) who arrived in Weymouth, Massachusetts in 1623, and became the first European settler of present-day Boston in 1625. He relocated again, to Rhode Island in 1635 and built his home on the river, in what would become Cumberland. With the Providence River, the Blackstone was the northeastern border of Dutch claims for New Netherland from Adriaen Block's charting of Narragansett Bay in 1614 through the Hartford Treaty of 1650.

The original Native American name for the river was the "Kittacuck", which meant "the great tidal river". The "Kittacuck", or Blackstone, was plentiful with salmon and lamprey in pre-colonial and colonial times. [3]

In 1790, Samuel Slater opened the first successful water powered cotton mill in America, Slater Mill, at Pawtucket Falls. This mill was powered by the waters of the Blackstone River. Many other mills appeared along the Blackstone River over time making it an important part of American industry. The industrialization also led to the river being identified by the end of the 20th century as the primary source of Narragansett Bay pollution. [4]

The initiative for the canal came from Providence, where a merchant community wished to profit from trade with the farming country of the Blackstone Valley and Worcester County. [5] The people of Worcester and the Blackstone Valley, eager for transport that would enable them to get better prices for their produce, welcomed the plan. However, since the trade of central Massachusetts was at that time going overland through the port of Boston, Massachusetts commercial interests succeeded in stalling the project for several years. Finally, in 1823, the Blackstone Canal Company was organized through an act of the Massachusetts legislature, with a Rhode Island company soon following. [6] The canal's construction may have been motivated by competition among rival industrialists to curtail "water rights". [7]

Construction began in 1825 and cost $750,000 (twice its initial estimate). The canal opened on October 7, 1828 when the packet boat Lady Carrington arrived in Worcester, the first vessel to make the trip. The canal brought immediate prosperity to Worcester and the Valley; farmers' profits increased and mills were built, especially in Worcester. [6] Using water to transport goods was a great improvement over the rough roads of the era. At the time of its construction, it represented the best available transportation technology.

The canal is listed in the National Register of Historic Places.

The Blackstone Valley offers multiple recreation areas for visitors to take advantage of the sights. These sites are:

Multiple modes of transportation are available that serve the Blackstone Valley.

Two major roads travel through the region. Route 122 in Massachusetts is known as the Blackstone Canal Heritage Highway. [9] The road travels through many of the region's mill villages. The other major road is Route 146 in Massachusetts and Rhode Island. Upgrades on the Massachusetts side have seen major economic benefits throughout the towns. [10]

Two MBTA Commuter Rail lines, the Worcester and Providence Lines have stations located within the Blackstone Valley. Both lines provide direct service to Boston's South Station. Providence station is also served by Amtrak trains on the Northeast Corridor, providing service to New York City and beyond. 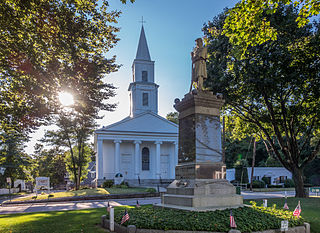 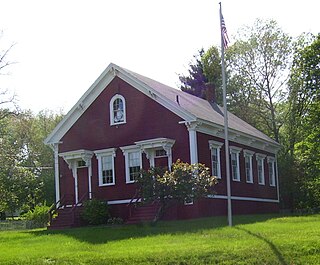 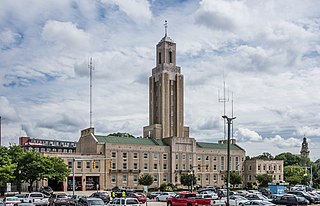 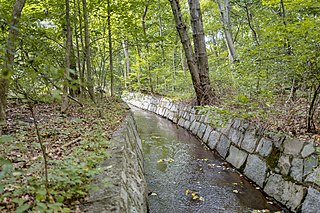 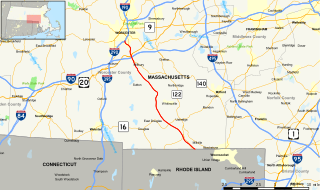 Route 146, sometimes called the Worcester-Providence Turnpike, is a limited-access road in the U.S. state of Massachusetts, maintained by the Massachusetts Department of Transportation (MassDOT). Spanning approximately 21 miles (34 km) along a south–north axis, it is a continuation of Route 146 in Rhode Island, which splits from I-95 in Providence. The southern terminus within Massachusetts exists in Millville, where the expressway enters the state from North Smithfield, Rhode Island. Among several local roads, Route 146 intersects with the Massachusetts Turnpike (I-90) in Millbury and I-290 in Worcester before arriving at its northern terminus at the intersection of several surface streets in downtown Worcester. Most of the route is a freeway, except for a short section near the boundary between Millbury and Sutton where there is driveway access and at-grade crossings.

Reverend William Blaxton was an early English settler in New England and the first European settler of Boston and Rhode Island. 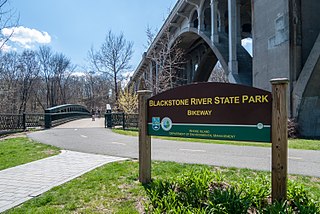 The Blackstone River Greenway is a partially completed 48-mile (77 km) paved rail trail defining the course of the East Coast Greenway through the Blackstone Valley from Worcester, Massachusetts to Providence, Rhode Island. 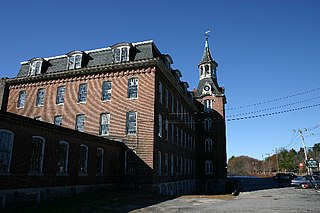 Linwood is a village with its own post office in the towns of Northbridge and Uxbridge, Massachusetts. 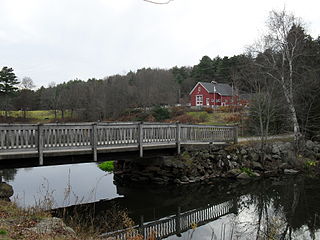 Wheelockville is a village in the town (township) of Uxbridge, Massachusetts, United States. Part of the village centering on Mendon and Henry streets is listed on the National Register of Historic Places as the Wheelockville Historic District. Wheelockville appears on the Blackstone U.S. Geological Survey Map. The Village receives municipal services from Uxbridge, for fire, police, EMS, School district, public works, and other services. Worcester's Judicial District includes Uxbridge District Court. The geography of Wheelockville includes several other distinct mill villages, including: Hecla and Elmdale. 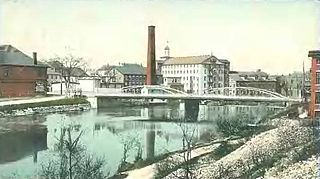 The history of Uxbridge, Massachusetts, founded in 1727, may be divided into its prehistory, its colonial history and its modern industrial history. Uxbridge is located on the Massachusetts-Rhode Island state line, and became a center of the earliest industrialized region in the United States.

The Rhode Island System refers to a system of mills, complete with small villages and farms, ponds, dams, and spillways first developed by Samuel Slater and his brother John Slater.