This is a list of all lighthouses in the U.S. state of Massachusetts as identified by the United States Coast Guard. Enumeration of the lighthouses in this state is complicated by the number of multiple tower stations and replacement of older towers, with the Brant Point Light station having had nine towers, two of which survive. [1] At present there are forty-seven active towers, of which eleven are privately maintained; thirteen are standing but inactive, seven have been replaced with skeleton towers, thirteen have been destroyed or removed, and one tower has been moved to another state. The oldest station, Boston Light, established in 1716, was the first lighthouse built in the colonies, and the current tower at that station, built in 1783, is the oldest survivor in the state and the second oldest in the nation, and was the last lighthouse automated in the United States. [2] The last station established was at the Buzzards Bay Entrance Light in 1961 (since replaced by an automated light on a steel tripod), but in 1986 the 1818 Great Point Light was rebuilt and relit, making it the last tower constructed in the state. The tallest towers in the state are the two Cape Ann Light towers, but the highest focal plane is at the Hospital Point Range Rear Light, which is located in the steeple of the First Baptist Church of Beverly. [2]

A number of inactivated Massachusetts lights have met with unusual fates. The Three Sisters of Nauset were sold off to separate private buyers before being purchased by the National Park Service and moved back near their original site. Range lights in Nantucket and Hyannis were incorporated into private dwellings, the former housing the Gilbreth family of Cheaper by the Dozen fame. The Point Gammon Light was converted into an observation tower for birdwatching. 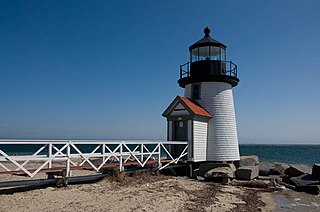 Brant Point Light is a lighthouse located on Nantucket Island. The station was established in 1746, automated in 1965, and is still in operation. The current tower was added to the National Register of Historic Places on October 28, 1987; it has the distinction of being the tenth light on the point, in addition to several range lights. Four of the others burned or blew down, two were condemned, two were unsatisfactory, and the remaining one stands unused.

Black Rock Harbor Light, also known as Fayerweather Island Light, is a lighthouse in Bridgeport, Connecticut, United States which stands on the south end of Fayerweather Island and marks the entrance to Black Rock Harbor. The first lighthouse at the site, built by Abisha Woodward under contract with the United States government, was a wooden tower that was lit and made operational by 1808. A storm destroyed the tower in 1821 and the current, stone lighthouse was erected in its place in 1823. The Black Rock Harbor Light was an active navigational aid until 1933 when it was replaced by two automatic lights offshore. The beacon was subsequently given to the City of Bridgeport in 1934. Two significant efforts during the 1980s and 1990s served to restore the aging tower and the light was relit as a non-navigational aid in 2000. Black Rock Lighthouse is listed as a contributing property for Bridgeport's Seaside Park historic district. 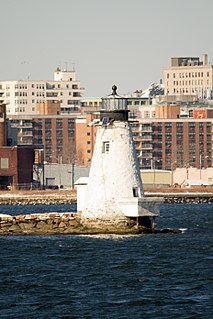 Palmer Island Light Station is a historic lighthouse in New Bedford Harbor in New Bedford, Massachusetts, USA. The lighthouse was built in 1849 out of stone rubble. It was discontinued when the harbor's hurricane barrier was built in the early 1960s, as its location immediately north of the barrier was no longer an outlying danger and there are lights on either side of the barrier opening. 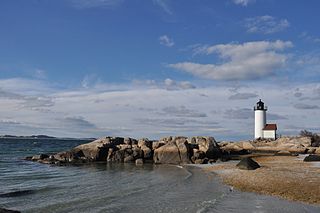 Annisquam Harbor Light Station is a historic lighthouse on Wigwam Point in the Annisquam neighborhood of Gloucester, Massachusetts. It can be viewed from nearby Wingaersheek Beach, Gloucester. It lies on the Annisquam River and is one of the four oldest lighthouses to surround the Gloucester peninsula as well as; Eastern Point Light, Ten Pound Island Light, and Thacher Island Light.

The Newburyport Harbor Front Range Light is one of two historic range lights in Newburyport, Massachusetts. When it was built in 1873, it was located at Bayley's Wharf, and provided, in combination with the Rear Range Light, a critical aid for navigating into Newburyport's harbor. In 1964 the light was moved to its present location on the grounds of the Merrimack River Coast Guard Station. The stations are no longer in service, but serves as a daymark for arriving mariners. 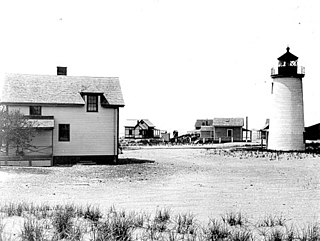 The Newburyport Harbor Light, also known as Plum Island Light, built in 1788, is a historic lighthouse on Northern Boulevard in Newburyport, Massachusetts.

The Newburyport Harbor Rear Range Light is a historic lighthouse at 61½ Water St. near the Merrimack River in Newburyport, Massachusetts. It was built in 1873 as one of a pair of range lights for guiding ships up the river to the city's harbor. 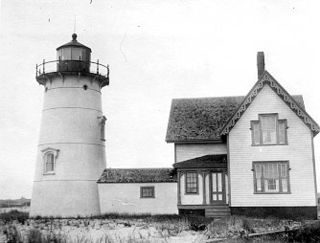 Stage Harbor Light is a lighthouse in Chatham, Massachusetts. It was built in 1880. It was discontinued in 1933, replaced by a skeleton tower 200 ft (60m) west which remains an active aid to navigation. The original light helped to mark a vessel staging area anchorage in deep water south of Harding's Beach used during periods of low visibility (fog) by vessels waiting to round Monomoy Point and Pollock Rip Channel. The lighthouse also lined up perfectly with the Chatham Twin Lights, making an effective range for Chatham Roads, the deep water channel crossing Nantucket Sound from south of Bishop & Clerks Reef off Point Gammon at Hyannis to the staging area. The original light is now a private residence. It sits at the entrance of what is still a busy harbor, used primarily by Chatham-based fishing fleets, sailboats from the Stage Harbor and Monomoy yacht clubs, and private craft owners. 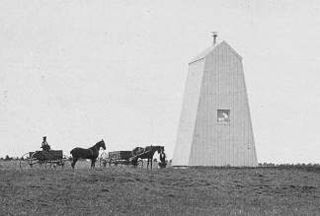 The Nantucket Beacon formed a range with the Brant Point Light to guide vessels into Nantucket harbor. Operated at various times in the 19th century, it was deactivated sometime after 1870. This range was eventually succeeded by the Nantucket Harbor Range Lights, which are still in operation.

The Spectacle Island Range Lights were a pair of range lights on Spectacle Island in Boston Harbor. They were established in 1897 and discontinued in 1913 after changes in the entrance channels to the harbor made them obsolete.

The Hyannis Rear Range Light, also known as the Hyannis Harbor Light, was a lighthouse and, for part of its life, one of a pair of range lights adjacent to Hyannis Harbor. The Range Rear tower was built in 1849 and equipped with a 5th order Fresnel lens in 1856. In 1863 the original birdcage lantern was replaced with a new cast iron one. In 1885, a front range light was added on the Old Colony Railroad Wharf, and the two lights together served to leading vessels to the wharf. The 20 foot Range Rear tower is shorter than most lighthouses, as its purpose was just to guide ships to the wharf. In the early 1800s, the railroad extended from its current terminus at the Hyannis Transportation Center, down what is now Old Colony Road to Harbor Road, where it ended in the 300 foot wharf that was a busy area for shipping coal, lumber, grain and fish.

The Hospital Point Range Rear Light is part of a pair of range lights in Beverly, Massachusetts. It is located in the steeple of the First Baptist Church of Beverly.

The Point Gammon Light was a lighthouse that stood on its eponymous point at the south end of Great Island in West Yarmouth, Massachusetts, on the east side of Lewis Bay and the entrance to Hyannis Harbor. Long inactive, it was converted into an ornithological observation tower in the late 19th century.