A census-designated place (CDP) [1] [2] [3] is a concentration of population defined by the United States Census Bureau for statistical purposes only. CDPs have been used in each decennial census since 1980 as the counterparts of incorporated places, [4] such as self-governing cities, towns, and villages, for the purposes of gathering and correlating statistical data. CDPs are populated areas that generally include one officially designated but currently unincorporated community, for which the CDP is named, plus surrounding inhabited countryside of varying dimensions and, occasionally, other, smaller unincorporated communities as well. CDPs include small rural communities, edge cities, colonias located along the Mexico–United States border, and unincorporated resort and retirement communities and their environs. [5]

The boundaries of a CDP have no legal status [1] and may not always correspond with the local understanding of the area or community with the same name. However, criteria established for the 2010 Census require that a CDP name "be one that is recognized and used in daily communication by the residents of the community" (not "a name developed solely for planning or other purposes") and recommend that a CDP's boundaries be mapped based on the geographic extent associated with inhabitants' regular use of the named place. [5]

The 1900 through 1930 Censuses did not report data for unincorporated places. [2]

For the 1980 Census, the designation was changed to "census designated places" [2] and the designation was made available for places inside urbanized areas in New England. [2] For the 1990 Census, the population threshold for CDPs in urbanized areas was reduced to 2,500. [2] From 1950 through 1990, the Census Bureau specified other population requirements for unincorporated places or CDPs in Alaska, Puerto Rico, island areas, and Native American reservations. Minimum population criteria for CDPs were dropped with the 2000 Census. [3] [5]

The Census Bureau's Participant Statistical Areas Program (PSAP) allows designated participants to review and suggest modifications to the boundaries for CDPs. [8] The PSAP was to be offered to county and municipal planning agencies during 2008.

Effects of designation and examples

The boundaries of such places may be defined in cooperation with local or tribal officials, but are not fixed, and do not affect the status of local government or incorporation; the territories thus defined are strictly statistical entities. CDP boundaries may change from one census to the next to reflect changes in settlement patterns. [1] [2] Further, as statistical entities, the boundaries of the CDP may not correspond with local understanding of the area with the same name. Recognized communities may be divided into two or more CDPs while on the other hand, two or more communities may be combined into one CDP. A CDP may also cover the unincorporated part of a named community where the rest lies within an incorporated place.

By defining an area as a CDP, that locality then appears in the same category of census data as incorporated places. This distinguishes CDPs from other census classifications, such as minor civil divisions (MCDs), which are in a separate category. [2]

The population and demographics of the CDP are included in the data of county subdivisions containing the CDP. Generally, a CDP shall not be defined within the boundaries of what the Census Bureau regards to be an incorporated city, village or borough. [2] However, the Census Bureau considers some towns in New England states, New Jersey and New York as well as townships in some other states as MCDs, even though they are incorporated municipalities in those states. In such states, CDPs may be defined within such towns or spanning the boundaries of multiple towns. [2]

There are a number of reasons for the CDP designation: 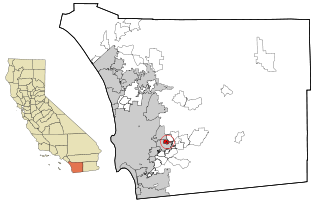 Bostonia is a neighborhood in San Diego County, California, comprising part of the northeastern portion of the city of El Cajon, as well as adjacent unincorporated areas of San Diego County. The portion of Bostonia that lies outside the El Cajon city limits is classified as a census-designated place (CDP) for statistical purposes by the United States Census Bureau. The population of the CDP was 15,379 at the 2010 census, up from 15,169 at the 2000 census.

A minor civil division (MCD) is a term used by the United States Census Bureau for primary governmental and/or administrative divisions of a county or county-equivalent, typically a municipal government such as a city, town, or civil township. MCDs are used for statistical purposes by the Census Bureau, and do not necessarily represent the primary form of local government. They range from non-governing geographical survey areas to municipalities with weak or strong powers of self-government. Some states with large unincorporated ares give substantial powers to counties; others have smaller or larger incorporated entities with governmental powers that are smaller than the MCD level chosen by the Census.

Peppermill Village is an unincorporated community near Maryland Route 214 in Prince George's County, Maryland, United States. FedExField, Metrorail's Blue Line, and Hampton Mall shopping center are all located nearby. Because it is not formally incorporated, it has no official boundaries, but the United States Census Bureau has defined a census-designated place (CDP) consisting of Peppermill Village and the adjacent community of Carmody Hills, for statistical purposes.

Rapid City is an unincorporated community and census-designated place (CDP) in Kalkaska County in the U.S. state of Michigan. At the 2010 census, the CDP had a population of 1,352. Rapid City is located within Clearwater Township.

A Census County Division (CCD) is a subdivision of a county used by the United States Census Bureau for the purpose of presenting statistical data. A CCD is a relatively permanent statistical area delineated cooperatively by the Census Bureau and state and local government authorities. CCDs are defined in 21 states that do not have well-defined and stable minor civil divisions (MCDs), such as townships, with local governmental purposes, or where the MCDs are deemed to be "unsatisfactory for the collection, presentation, and analysis of census statistics".

Watkins is an unincorporated town and a census-designated place (CDP) located in and governed by Arapahoe and Adams counties, Colorado, United States. The CDP is a part of the Denver–Aurora–Lakewood, CO Metropolitan Statistical Area. The town is surrounded by Aurora and its post office, which lies within the Aurora city limits, has the ZIP Code 80137. At the United States Census 2010, the population of the Watkins CDP was 653, while the population of the 80137 ZIP Code Tabulation Area was 1,323 including adjacent communities.

Howard is an unincorporated town, a post office, and a census-designated place (CDP) located in and governed by Fremont County, Colorado, United States. The CDP is a part of the Cañon City, CO Micropolitan Statistical Area. The Howard post office has the ZIP Code 81233. At the United States Census 2010, the population of the Howard CDP was 723, while the population of the 81233 ZIP Code Tabulation Area was 823 including adjacent areas.

A designated place (DPL) is a type of community or settlement identified by Statistics Canada that does not meet the criteria used to define municipalities or population centres. DPLs are delineated every 5 years for the Canadian census as the statistical counterparts of incorporated places such as cities, towns, and villages.

Aetna Estates is an unincorporated community and a census-designated place (CDP) located in and governed by Arapahoe County, Colorado, United States. The CDP is a part of the Denver–Aurora–Lakewood, CO Metropolitan Statistical Area. The population of the Aetna Estates CDP was 834 at the United States Census 2010. The unincorporated community is surrounded by Aurora and lies in ZIP Code 80018.

Manistee Lake is an unincorporated community and census-designated place (CDP) in Kalkaska County in the U.S. state of Michigan. At the 2010 census, the CDP had a population of 456. Manistee Lake is located within Coldsprings Township to the north and a small portion extending south into Excelsior Township.

Bear Lake is an unincorporated community and census-designated place (CDP) in Kalkaska County in the U.S. state of Michigan. At the 2010 census, the CDP had a population of 327. Bear Lake is located within Bear Lake Township.