A municipal corporation is the legal term for a local governing body, including (but not necessarily limited to) cities, counties, towns, townships, charter townships, villages, and boroughs. [1] The term can also be used to describe municipally owned corporations. [1] [2] [3]

Municipal incorporation occurs when such municipalities become self-governing entities under the laws of the state or province in which they are located. Often, this event is marked by the award or declaration of a municipal charter. A city charter or town charter or municipal charter is a legal document establishing a municipality, such as a city or town.[ citation needed ]

In Canada, charters are granted by provincial authorities.

The Corporation of Chennai is the oldest Municipal Corporation in the world outside the United Kingdom. [4]

After the Partition of Ireland, the corporations in the Irish Free State were Dublin, Cork, Limerick and Waterford (county boroughs) and Drogheda, Kilkenny, Sligo, Clonmel, and Wexford (non-county boroughs). Dún Laoghaire gained borough status in 1930 as "The Corporation of Dun Laoghaire". [6] Galway's borough status, lost in 1840, was restored in 1937; it was formally styled "the Mayor, Aldermen and Burgesses of the Borough of Galway", [7] but referred to as "the Corporation". [8]

The New Zealand Constitution Act 1852 allowed municipal corporations to be established within the new Provinces of New Zealand. The term fell out of favour following the abolition of the Provinces in 1876. [9]

According to one definition of the term, municipal corporations are "organisations with independent corporate status, managed by an executive board appointed primarily by local government officials, and with majority public ownership". [1] Some such corporations rely on revenue from user fees, distinguishing them from agencies and special districts funded through taxation, [2] although this is not always the case. [1] Such municipal corporations result from a process of "externalization", and require different skills and orientations from the respective local governments, and follow common changes[ clarification needed ] in the institutional landscape of public services. [3] They are argued to be more efficient than government bureaucracies, but have higher failure rates because of their legal and managerial autonomy. [1]

Dublin County Council was a local authority for the administrative county of County Dublin in Ireland. 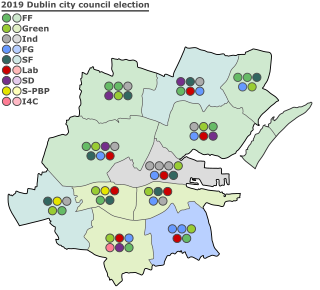 A local electoral area is an electoral area for elections to local authorities in Ireland. All elections use the single transferable vote. The Republic of Ireland is divided into 166 LEAs, with an average population of 28,700 and average area of 423.3 square kilometres (163.4 sq mi). The boundaries of LEAs are defined by statutory instrument, usually based lower-level units called electoral divisions (EDs), with a total of 3,440 EDs in the state.

A ward is a local authority area, typically used for electoral purposes. In some countries, wards are usually named after neighbourhoods, thoroughfares, parishes, landmarks, geographical features and in some cases historical figures connected to the area. It is common in the United States for wards to simply be numbered.

Town commissioners were elected local government bodies that existed in urban areas in Ireland from the 19th century until 2002. Larger towns with commissioners were converted to urban districts by the Local Government (Ireland) Act 1898, with the smaller commissions continuing to exist beyond partition in 1922. The idea was a standardisation of the improvement commissioners established in an ad-hoc manner for particular towns in Britain and Ireland in the eighteenth century. The last town commissioners in Northern Ireland were abolished in 1962. In the Republic of Ireland, the remaining commissions were renamed as town councils in 2002, and abolished in 2014.

Dún Laoghaire–Rathdown County Council is the authority responsible for local government in the county of Dún Laoghaire–Rathdown, Ireland. It is one of three local authorities that succeeded the former Dublin County Council on its abolition on 1 January 1994 and one of four councils in the old County Dublin. As a county council, it is governed by the Local Government Act 2001. The council is responsible for housing and community, roads and transportation, urban planning and development, amenity and culture, and environment. The council has 40 elected members. Elections are held every five years and are by single transferable vote. The head of the council has the title of Cathaoirleach (Chairperson). The county administration is headed by a Chief Executive, Philomena Poole. The county town is Dún Laoghaire. It serves a population of approximately 206,260.

Galway is a barony in Ireland, comprising Galway city and surrounding parts of County Galway. The barony is coterminous with the former County of the Town of Galway, a county corporate created by the town's 1610 charter and abolished by the Local Government (Ireland) Act 1898.

The Local Government (Dublin) Act 1930 is an Act of the Oireachtas which altered the administration of County Dublin and Dublin City.