A global city, also called a power city, world city, alpha city or world center, is a city which is a primary node in the global economic network. The concept comes from geography and urban studies, and the idea that globalization is created, facilitated, and enacted in strategic geographic locales according to a hierarchy of importance to the operation of the global system of finance and trade.

The most complex node is the "global city", with links binding it to other cities having a direct and tangible effect on global socio-economic affairs. [1] The term "megacity" entered common use in the late 19th or early 20th centuries; one of the earliest documented uses of the term was by the University of Texas in 1904. [2] The term "global city", rather than "megacity", was popularized by sociologist Saskia Sassen in her 1991 work, The Global City: New York, London, Tokyo. [3] "World city", meaning a city heavily involved in global trade, appeared in the May 1886 description of Liverpool, by The Illustrated London News . [4] Patrick Geddes later used the term "world city" in 1915. [5] More recently, the term has focused on a city's financial power and high technology infrastructure, with other factors becoming less relevant. [6] [7]

Cities can fall from ranking, as in the case of cities that have become less cosmopolitan and less internationally renowned in the current era.

Although criteria are variable and fluid, typical characteristics of world cities are: [9]

Global city rankings are numerous, with one study suggesting as many as 300 [12] . Ranked cities tend to be concentrated in North America and Europe.

In 2015, the second Global Economic Power Index, a meta list compiled by Richard Florida, was published by The Atlantic (distinct from a namesake list [13] published by the Martin Prosperity Institute), with city composite rank based on five other lists. [13] [14]

The Institute for Urban Strategies at The Mori Memorial Foundation in Tokyo issued a comprehensive study of global cities in 2018. They are ranked based on six categories: economy, research and development, cultural interaction, livability, environment, and accessibility, with 70 individual indicators among them. The top ten world cities are also ranked by subjective categories including manager, researcher, artist, visitor and resident. [15]

Jon Beaverstock, Richard G. Smith and Peter J. Taylor established the Globalization and World Cities Research Network (GaWC). A roster of world cities in the GaWC Research Bulletin 5 is ranked by their connectivity through four "advanced producer services": accountancy, advertising, banking/finance, and law. [8] The GaWC inventory identifies three levels of global cities and several sub-ranks, [16] although the authors caution that "concern for city rankings operates against the spirit of the GaWC project" [17] (emphasis in original).

In 2008, the American journal Foreign Policy , in conjunction with the consulting firm A.T. Kearney and the Chicago Council on Global Affairs, published a ranking of global cities, based on consultation with Saskia Sassen, Witold Rybczynski, and others. [19] Foreign Policy noted that "the world’s biggest, most interconnected cities help set global agendas, weather transnational dangers, and serve as the hubs of global integration. They are the engines of growth for their countries and the gateways to the resources of their regions." [20] The ranking is based on 27 metrics across five dimensions: business activity, human capital, information exchange, cultural experience, and political engagement and was updated in 2010, 2012, 2014, 2015, 2016, 2017, 2018 and 2019 [21] . Since 2015 it has been published together with a separate index called the Global Cities Outlook: a projection of a city's potential based on rate of change in 13 indicators across four dimensions: personal well-being, economics, innovation, and governance. [22]

"The Wealth Report" (a global perspective on prime property and wealth) is made by the London-based estate agent Knight Frank LLP together with the Citi Private Bank. The report includes a "Global Cities Survey", evaluating which cities are considered the most important to the world's HNWIs (high-net-worth individuals, having over $25 million of investable assets). For the Global Cities Survey, Citi Private Bank's wealth advisors, and Knight Frank's luxury property specialists were asked to name the cities that they felt were the most important to HNWIs, in regard to: "economic activity", "political power", "knowledge and influence" and "quality of life". [23] [24]

In 2012, the Economist Intelligence Unit (The Economist Group) ranked the competitiveness of global cities according to their demonstrated ability to attract capital, businesses, talent and visitors. [25]

The Schroders ranked the competitiveness of global cities. The cities in the classifications as "Top30" in the 2019 edition are: [26]

The Global Giants classification includes wealthy, extremely large metro areas that the largest cities from developed nations. They are hubs for financial markets, major corporations, and serve as key nodes in global capital and talent flows.

The World's Most Talked About Cities

A study by ING Media, a London-based Built environment communications firm, has ranked 250 global cities by total online mentions across social media and online news for 2019. It found that one in every five digital mentions were for Tokyo, New York City, London and Paris, identifying these as the world's super brands [28] [29] . The "Top 10 in the 2019 edition are [30] :

Tokyo, officially Tokyo Metropolis, is one of the 47 prefectures of Japan. The capital of Japan, it houses the Emperor of Japan and the Japanese government. Tokyo forms part of the Kantō region on the southeastern side of Japan's main island, Honshu, and includes the Izu and Ogasawara Islands. 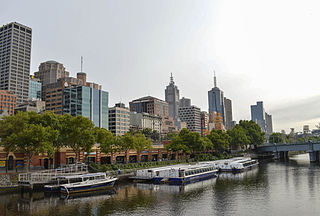 The world's most livable cities is an informal name given to any list of cities as they rank on an annual survey of living conditions. In addition to providing clean water, clean air, adequate food and shelter, a ‘livable’ city must also generate a sense of community and offer hospitable settings for all, especially young people, to develop social skills, a sense of autonomy and identity. Regions with cities commonly ranked in the top 50 include Canada, Europe, Australia, and New Zealand. Three examples of such surveys are Monocle's "Most Liveable Cities Index", the Economist Intelligence Unit's "Global Liveability Ranking", and "Mercer Quality of Living Survey". Numbeo has the largest statistics and survey data based on cities and countries. Deutsche Bank's Liveability Survey is another ranking of cities by quality of life.

Saskia Sassen is a Dutch-American sociologist noted for her analyses of globalization and international human migration. She is Robert S. Lynd Professor of Sociology at Columbia University and Centennial visiting Professor at the London School of Economics. Sassen coined the term global city. 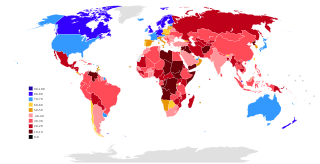 The Corruption Perceptions Index (CPI) is an index published annually by Transparency International since 1995 which ranks countries "by their perceived levels of public sector corruption, as determined by expert assessments and opinion surveys." The CPI generally defines corruption as "the misuse of public power for private benefit". 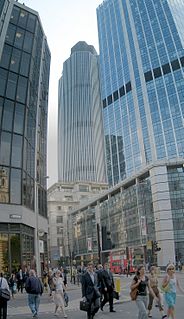 The economy of London is dominated by service industries, particularly financial services and associated professional services, which have strong links with the economy in other parts of the United Kingdom (UK) and internationally. In addition to being the capital city of the United Kingdom, London is one of the world's leading financial centres for international business and commerce and is one of the "command centres" for the global economy. 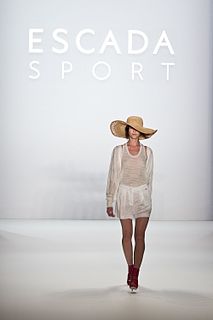 A fashion capital is a city which has major influence on international fashion trends, and in which the design, production and retailing of fashion products, plus events such as fashion weeks, awards and trade fairs all generate significant economic output. 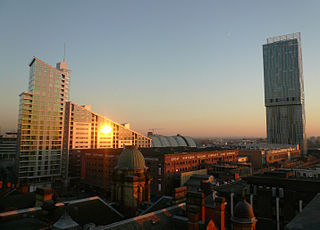 The economy of Manchester is among the largest in England. Manchester is a city and metropolitan borough of Greater Manchester. It lies within the United Kingdom's second-most populous urban area, with a population of 2.55 million. Manchester's commercial centre is in Manchester city centre, focused on Spinningfields, Mosley Street, Deansgate, King Street and Piccadilly Gardens.

The following are the international rankings of Jordan.

The following are international rankings of Turkey.

Housing, or more generally living spaces, refers to the construction and assigned usage of houses or buildings collectively, for the purpose of sheltering people — the planning or provision delivered by an authority, with related meanings. The social issue is of ensuring that members of society have a home in which to live, whether this is a house, or some other kind of dwelling, lodging, or shelter. Many governments have one or more housing authorities, sometimes also called a housing ministry, or housing department.

The following are International rankings of France.

The following are international rankings of Egypt.

The Globalization and World Cities Research Network, commonly abbreviated to GaWC, is a think tank that studies the relationships between world cities in the context of globalization. It is based in the geography department of Loughborough University in Leicestershire, United Kingdom. GaWC was founded by Peter J. Taylor in 1998, Together with Jon Beaverstock and Richard G. Smith, they create the GaWC's bi-annual categorization of world cities into "Alpha", "Beta" and "Gamma" tiers, based upon their international connectedness.

The Economist Intelligence Unit (EIU) publishes an annual Global Liveability Ranking, which ranks 140 cities for their urban quality of life based on assessments of stability, healthcare, culture and environment, education and infrastructure. Austria's capital, Vienna, has been ranked the most liveable among the 140 cities surveyed by The Economist Intelligence Unit for the second year in a row. Melbourne, Australia, had been ranked by the EIU as the world's most liveable city for seven years in a row, from 2011 to 2017. Vienna maintains a near-ideal 99.1, separating it from the Australian city by 0.7 points.

The following are international rankings of Shanghai by categories.