In United States local government, a consolidated city-county is formed when one or more cities and their surrounding county (parish in Louisiana, borough in Alaska) merge into one unified jurisdiction. As such it has the governmental powers of both a municipal corporation and an administrative division of a state. [1]

Not considering Hawaii, which has no independent municipalities, the Midwest and Upper South have the highest concentration of large consolidated city-county governments in the United States, includingIndianapolis, Indiana; Nashville, Tennessee; Louisville, Kentucky; Kansas City, Kansas; and Lexington, Kentucky. Currently, the largest consolidated city-county in the United States by population is Philadelphia, Pennsylvania, while the largest by land area is Sitka, Alaska.

Consolidated city-counties are typically formed to address particular government challenges. Among the benefits of having a unified jurisdiction include potential cost savings, more efficiency, increased legal powers and revenue sources, and a more streamlined planning system. [1]

Wyandotte County, Kansas, uses the term "unified government" to refer to its consolidation with Kansas City, Kansas, and most of the towns within the county boundaries in which some cities and towns remain separate jurisdictions within the county. Individual sections of a metropolitan or regional municipality may retain some autonomous jurisdiction apart from the citywide government.

Often, in place of another level of government, local governments form councils of governments – essentially governmental organizations which are not empowered with any law-making or law enforcement powers. This is the case in the Atlanta metropolitan area, where the Atlanta Regional Commission (ARC) studies and makes recommendations on the impact of all major construction and development projects on the region, but generally cannot stop them. The Georgia Regional Transportation Authority (GRTA) is a true government agency of the state of Georgia, and does control some state transportation funding to the cities and counties, but otherwise has very little authority beyond this small power of the purse.

The case of New York City is unique, in that the city consists of five boroughs, each of which is co-extensive with a county. Each has its own district attorney; however, county-level government is essentially non-existent as all executive and legislative power is exercised by the city government throughout the five boroughs. The city, as currently constituted, was created in 1898 when the city of New York (then comprising what would become the boroughs of Manhattan and The Bronx) annexed Kings County, Queens County, and Richmond County as the boroughs of Brooklyn, Queens, and Staten Island, respectively.

Similar arrangements also exist in other countries. England has six "metropolitan counties" created in 1974: Greater Manchester, Merseyside, South Yorkshire, Tyne and Wear, West Midlands, and West Yorkshire. From 1986, these metropolitan counties do not have county councils but rather joint boards for certain functions. Modern unitary authorities are similar, and are known as county boroughs in Wales. In Scotland, Aberdeen, Dundee, Edinburgh and Glasgow are functionally "independent cities", though the term is not used. London is unique however, being a ceremonial county (officially known as Greater London) containing the 32 London boroughs. Enclaved within Greater London, the ancient City of London forms a distinct county, which today forms only a tiny part of what most consider to be London as a capital city, which takes up 607 square miles.

In the Canadian province of Ontario, there exist several single-tier municipalities which serve the same sort of functions as American consolidated city-counties. One example of this is the City of Toronto, which was created in 1998 from the amalgamation of the central government and the six constituent municipalities of the Municipality of Metropolitan Toronto (a type of regional municipality) which was originally created in 1954.

In Germany, Berlin and Hamburg are both cities and states (the state of Bremen consists of the cities of Bremen and Bremerhaven). Nearly every larger city in Germany is an independent city, like Frankfurt, Stuttgart, Munich or Dresden; Austria, where the capital of Vienna is both a city and state; France, where the capital city of Paris has been coterminous with the département of Paris since 1968; and South Korea, where Seoul is a special city , while six other cities (Busan, Daegu, Daejeon, Gwangju, Incheon, and Ulsan) are metropolitan cities. Additionally, the Australian Capital Territory government in Australia performs all municipal functions of the city of Canberra, and thus functions as an integrated city-territory. Similarly, the City of Tokyo merged with the prefecture to form Tokyo metropolis in 1943.

These consolidated cities are: [3]

Consolidated since their creation

Merged with some independent municipalities

Five cities in the Hampton Roads region of Virginia were formed by the consolidation of a city with a county: Chesapeake, Hampton, Newport News, Suffolk, and Virginia Beach (from Norfolk, Elizabeth City, Warwick, Nansemond, and Princess Anne counties, respectively). However, in each case an independent city was created and as such they are not consolidated city-counties. Instead, the Code of Virginia uses the term "consolidated city." [1] [25] Similarly, Carson City was consolidated with Ormsby County, Nevada in 1969, but the county was simultaneously dissolved. The city is now a municipality independent of any county. [1]

A county seat is an administrative center, seat of government, or capital city of a county or civil parish. The term is used in Canada, China, Romania, Hungary and the United States. The equivalent term shire town is used in the U.S. state of Vermont and perhaps elsewhere. County towns have a similar function in the United Kingdom and Republic of Ireland, as well as historically in Jamaica.

The administrative divisions of New York are the various units of government that provide local services in the State of New York. The state is divided into boroughs, counties, cities, townships, called "towns", and villages. They are municipal corporations, chartered (created) by the New York State Legislature, as under the New York State constitution the only body that can create governmental units is the state. All of them have their own governments, sometimes with no paid employees, that provide local services. Centers of population that are not incorporated and have no government or local services are designated hamlets. Whether a municipality is defined as a borough, city, town, or village is determined not by population or land area, but rather on the form of government selected by the residents and approved by the New York Legislature. Each type of local government is granted specific home rule powers by the New York State Constitution. There are still occasional changes as a village becomes a city, or a village dissolves, each of which requires legislative action. New York also has various corporate entities that provide local services and have their own administrative structures (governments), such as school and fire districts. These are not found in all counties.

County police are police forces existing primarily in the United States that possess primary jurisdiction over an entire county. England and Wales, two constituent countries of the United Kingdom (UK), are policed by territorial police forces which are largely formed on a county basis. Historically, Northern Ireland and Scotland, the other two constituent countries of the UK, have had county police, although both countries now have unified national police services. 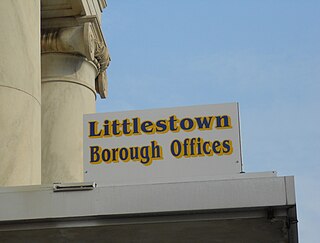 In the United States, an independent city is a city that is not in the territory of any county or counties and is considered a primary administrative division of its state. Independent cities are classified by the United States Census Bureau as "county equivalents" and may also have similar governmental powers as a consolidated city-county. However, in the case of a consolidated city-county, a city and a county were merged into a unified jurisdiction in which the county at least nominally exists to this day, whereas an independent city was legally separated from any county or merged with a county that simultaneously ceased to exist even in name.