West Midlands is a metropolitan county in the West Midlands Region,England,with a 2021 population of 2,919,600, [3] making it the second most populous county in England after Greater London. It was created in 1974 by the Local Government Act 1972,from parts of Staffordshire,Worcestershire and Warwickshire. The county is a NUTS 2 region within the wider NUTS 1 region of the same name. It embraces seven metropolitan boroughs:the cities of Birmingham,Coventry and Wolverhampton,and the boroughs of Dudley,Sandwell,Solihull and Walsall. The county is overseen by the West Midlands Combined Authority,which covers all seven boroughs and other non-constituent councils,on economy,transport and housing.

Although the modern county has only existed since 1974,the settlements of the West Midlands have long been important centres of commerce and industry as well as developing a good local infrastructure. Coventry was one of England's most important cities during the Middle Ages,with its prosperity built upon wool and cloth manufacture. Birmingham and Wolverhampton have a tradition of industry dating back to the 16th century,when small metal-working industries developed. Birmingham was known for its manufacture of small arms,whereas Wolverhampton became a centre of lock manufacture and brass working. The coal and iron ore deposits of the Black Country area provided a ready source of raw materials. The area grew rapidly during the Industrial Revolution,and by the 20th century had grown into one large conurbation. Coventry was slower to develop,but by the early 20th century it had become an important centre of bicycle and car manufacture.

1966 saw a substantial reform in the local government of the area as the patchwork of county boroughs with municipal boroughs and urban district councils in between was replaced by a core of county boroughs covering a contiguous area,roughly as follows:

Near the area,three other towns remained separate (Halesowen,Stourbridge and Sutton Coldfield),while Aldridge and Brownhills joined to form a single unit,called Aldridge-Brownhills. In the same year,a single West Midlands Constabulary was formed for the Black Country county boroughs,whilst Birmingham retained its Birmingham City Police and Solihull continued being policed by the Warwickshire Constabulary. The West Midlands Passenger Transport Authority was established in 1968.

In 1974,the Local Government Act 1972 came into effect,creating the metropolitan county of West Midlands. This area was based on the seven county boroughs and the other non-county boroughs and urban districts around the fringe of the conurbation.

The new area consisted of seven new metropolitan boroughs,with Aldridge-Brownhills added to Walsall;Halesowen and Stourbridge to Dudley and Sutton Coldfield to Birmingham. A new borough of Sandwell was formed by the merger of West Bromwich and Warley. The actual designation of Warley itself was abolished and the three towns of Smethwick,Oldbury and Rowley Regis reinstated as component parts of Sandwell,although these areas formed the Warley postal district. Solihull took in much of the suburban fringe to the east of Birmingham,including the former villages of Chelmsley Wood and Castle Bromwich,also Birmingham Airport,and the area of countryside between Solihull and Coventry,whilst Coventry itself received only small changes and Wolverhampton was unaltered. This led to (apart from in the east,with Coventry and the Meriden Gap) quite a tightly defined metropolitan border,excluding such places as Burntwood,Bromsgrove,Cannock,Kidderminster,Lichfield and Wombourne which had been considered for inclusion in the West Midlands metropolitan area by the Redcliffe-Maud Report.

In 1994, the western/southern shores of Chasewater, plus the adjacent Jeffreys Swag, were transferred from the Metropolitan Borough of Walsall to the District of Lichfield, Staffordshire. [10] Further boundary changes came into effect in 1995, when part of the Hereford and Worcester parish of Frankley (including the south-west part of Bartley Reservoir) was transferred to Birmingham and became part of the county.

On 17 June 2016, a new administrative body, the West Midlands Combined Authority was created for the county, under the Local Democracy, Economic Development and Construction Act 2009, which created several other combined authorities in England. The new body has powers over transport, economic development, skills and planning. A new directly elected position of Mayor of the West Midlands was created in 2017 to chair the new body. [11] The first Mayoral election was held in May 2017, and the position was won by Andy Street of the Conservative Party.

The West Midlands is a landlocked county that borders the counties of Warwickshire to the east, Worcestershire to the south, and Staffordshire to the north and west.

The West Midlands County is one of the most heavily urbanised counties in the UK. Birmingham, Wolverhampton, the Black Country and Solihull together form the third most populous conurbation in the United Kingdom with a combined population of around 2.44 million. [12] However, the West Midlands is not entirely urban; Coventry is separated from the West Midlands conurbation by a stretch of green belt land approximately 13 miles (21 km) across, known as the "Meriden Gap", which retains a strongly rural character. A smaller piece of green belt between Birmingham, Walsall and West Bromwich includes Barr Beacon and the Sandwell Valley.

There are 23 Sites of Special Scientific Interest in the county. [14] One of these SSSIs is Sutton Park in Sutton Coldfield, which has an area of 970 hectares (2,400 acres). [15] As a result, it is one of the largest urban parks in Europe, and the largest outside of a capital city in Europe.[ citation needed ] The park also has national nature reserve status.

The West Midlands contains ten universities, seven of which are located in Birmingham:

Each of the local authorities has at least one further education college for students aged over 16, and since September 1992 all of the local authorities have operated traditional 5–7 infant, 7–11 junior, and 11-16/18 secondary schools for students in compulsory education. This followed the demise of 5–8 first, 8–12 middle and 12-16/18 secondary schools in the Sutton Coldfield area. [20]

All secondary state education in Dudley and Sandwell is mixed comprehensive, although there are a small number of single sex and grammar schools existing in parts of Birmingham, Solihull, Wolverhampton and Walsall.

In August 2009, Matthew Boulton College and Sutton Coldfield College merged to become Birmingham Metropolitan College, one of the largest further and higher education institutions in the country. Plans are afoot for the construction of a new campus in the Perry Barr area of Birmingham.

In rugby league, the Midlands Hurricanes are the only team from the county playing in the professional ranks, currently in the third tier League 1.

In association football, there are six Premier League and Football League teams in the county of which two, Aston Villa, and Wolverhampton Wanderers, play in the Premier League. The following clubs are often referred to as the West Midlands "Big Six":

The West Midlands is also home to Warwickshire County Cricket Club, who are based at Edgbaston Cricket Ground, which also hosts Test matches and One Day Internationals. The Birmingham Panthers basketball team replaced the Birmingham Bullets and are currently based at a facility provided by the University of Wolverhampton in Walsall. 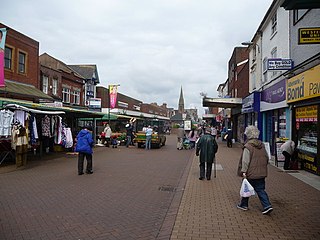 Sandwell is a metropolitan borough of the West Midlands county in England. The borough is named after the Sandwell Priory, and spans a densely populated part of the West Midlands conurbation. According to Sandwell Metropolitan Borough Council, the borough comprises the six amalgamated towns of Oldbury, Rowley Regis, Smethwick, Tipton, Wednesbury, and West Bromwich, although these places consist of numerous smaller settlements and localities.

The West Midlands is one of nine official regions of England at the first level of International Territorial Level for statistical purposes. It covers the western half of the area traditionally known as the Midlands. The region consists of the counties of Herefordshire, Shropshire, Staffordshire, Warwickshire, West Midlands and Worcestershire. The region has seven cities; Birmingham, Coventry, Hereford, Lichfield, Stoke-on-Trent, Wolverhampton and Worcester.

The West Midlands conurbation is the large conurbation that includes the cities of Birmingham and Wolverhampton and the towns of Sutton Coldfield, Dudley, Walsall, West Bromwich, Solihull, Stourbridge and Halesowen in the English West Midlands. It is also referred to as the Birmingham urban area and is one of the most populated and densely populated built-up areas in the United Kingdom. 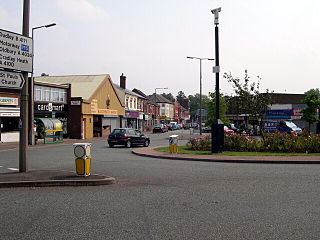 Blackheath is a town and ward in the Rowley Regis area of the Sandwell Metropolitan Borough, in the county of West Midlands, England.

Warley was a short-lived county borough and civil parish in the geographical county of Worcestershire, England, forming part of the West Midlands conurbation. It was formed in 1966 by the combination of the existing county borough of Smethwick with the municipal boroughs of Oldbury and Rowley Regis, by recommendation of the Local Government Commission for England. It was abolished just 8 years later in 1974 under the Local Government Act 1972, with its area passing to the Metropolitan Borough of Sandwell.

This article is about the government of Birmingham, England.

Streetly is an area in the county of West Midlands, England which lies around 7 miles (11 km) to the north of Birmingham City Centre. It is uniquely located within the borders of Birmingham, Lichfield and Walsall district authorities, and is part of the West Midlands conurbation. It is adjacent to, New Oscott, Great Barr, Four Oaks, Little Aston and Aldridge.

A civil parish is a subnational entity, forming the lowest unit of local government in England. There are 21 civil parishes in the ceremonial county of West Midlands, most of the county being unparished; Dudley, Sandwell, Walsall and Wolverhampton are completely unparished. At the 2001 census, there were 89,621 people living in the parishes, accounting for 3.5 per cent of the county's population.

NHS West Midlands was a strategic health authority (SHA) of the National Health Service in England. It operated in the West Midlands region, which is coterminous with the local government office region. It was abolished in April 2013. 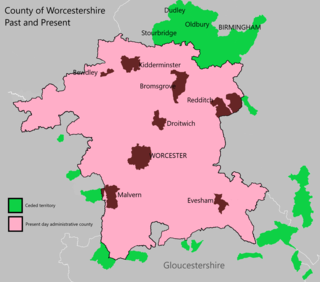 Healthcare in the West Midlands was, until July 2022, the responsibility of five clinical commissioning groups: Birmingham and Solihull, Sandwell and West Birmingham, Dudley, Wolverhampton, and Walsall.

The West Midlands Passenger Transport Executive (WMPTE) was the public body responsible for public transport in the West Midlands metropolitan county in the United Kingdom from 1969 until 2016. The organisation operated under the name Centro from 1990, and was publicly branded as Network West Midlands from 2005.