Commonwealth is a term used by two unincorporated territories of the United States in their full official names. The territories are: the Northern Mariana Islands and Puerto Rico (which, in Spanish, officially calls itself the 'Free Associated State of Puerto Rico').

The definition of Commonwealth according to current U.S. State Department policy (as codified in the department's Foreign Affairs Manual ) reads: "The term 'Commonwealth' does not describe or provide for any specific political status or relationship. It has, for example, been applied to both states and territories. When used in connection with areas under U.S. sovereignty that are not states, the term broadly describes an area that is self-governing under a constitution of its adoption and whose right of self-government will not be unilaterally withdrawn by Congress." [1]

Of the current U.S. insular areas, the term was first used by Puerto Rico in 1952 as its formal name in English ("Commonwealth of Puerto Rico"). The formal name in Spanish for Puerto Rico is Estado Libre Asociado de Puerto Rico ("Free Associated State of Puerto Rico"). The United States acquired the islands of Puerto Rico in 1898 after the Spanish–American War. In 1950, Congress enacted legislation (P.L. 81-600) authorizing Puerto Rico to hold a constitutional convention and in 1952, the people of Puerto Rico ratified a constitution establishing a republican form of government for the island. [2] Puerto Rico's political relationship with the U.S. has been a continuing source of debate in Puerto Rico, the United States Congress, and the United Nations. The issue revolves around whether Puerto Rico should remain a U.S. territory, become a U.S. state, or become an independent country. The debate has spawned several referenda, presidential executive orders and bills in the U.S. Congress. Ultimately the U.S. Congress is the only body empowered to decide the political status of Puerto Rico, as stated under the Territorial Clause. [3]

Despite the Spanish translation of the term "commonwealth", Puerto Rico's relationship with United States is not a Compact of Free Association (which is the case for the Federated States of Micronesia, Palau, and the Marshall Islands). As sovereign states, these islands have full right to conduct their own foreign relations, while the Commonwealth of Puerto Rico is part of the United States as a territory.

The territory was organized by the Foraker Act in 1900, which was amended by the Jones–Shafroth Act in 1917. The drafting of the Constitution of Puerto Rico by its residents was authorized by Congress in 1951, and the result approved in 1952. The government of Puerto Rico has held several referenda with the options of U.S. statehood, independence, and commonwealth; the commonwealth option won on multiple plebiscites held in 1967, 1993, and 1998. [4] In 2012, 54% of the voters did not wish to continue the present territorial status. Of the non-territorial statuses, becoming a U.S. state got 61.16% of the votes, Sovereign Free Associate State got 33.34% and Independence got 5.49%. [5]

Puerto Ricans have United States citizenship and vote for a Resident Commissioner of Puerto Rico, with voice but without vote, in the United States House of Representatives. With the exception of federal employees (such as employees of the United States Postal Service, Federal Bureau of Investigation, and servicemen in all branches of the military), residents of Puerto Rico generally do not pay federal income taxes (with the exception of Social Security and Medicare taxes) and Puerto Rico has no representation in the Electoral College that ultimately chooses the U.S. president and vice president.

Puerto Rico has sports sovereignty, with its own national team at the Olympics and at other international competitions. Puerto Rico also participates in different international organizations such as the Economic Commission for Latin America (ECLA) (associate member), the Organization of Ibero-American States (full member), and the Ibero-American Summit (associate member). [6]

Commonwealth of the Northern Mariana Islands

Transition to U.S. Immigration Law began November 28, 2009 in the Commonwealth of the Northern Mariana Islands (CNMI). CNMI's immigration laws have been replaced by the INA and other U.S. immigration laws. [9] [10]

U.S. insular areas are not afforded direct representation in the federal legislature, either in the Senate or in the House of Representatives.

Article I, Section 3 of the Constitution provides that each U.S. State is entitled to two Senators, but makes no provision for representation of insular areas in the Senate.

Commonwealth of the Philippines 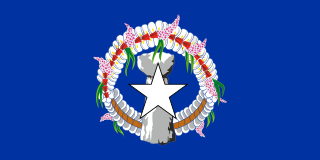 A dependent territory, dependent area or dependency is a territory that does not possess full political independence or sovereignty as a sovereign state yet remains politically outside the controlling state's integral area. 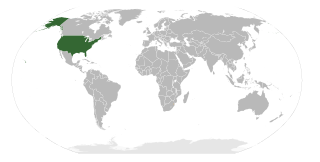 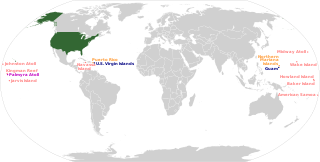 The Jones–Shafroth Act —also known as the Jones Act of Puerto Rico, Jones Law of Puerto Rico, or as the Puerto Rican Federal Relations Act of 1917— was an Act of the United States Congress, signed by President Woodrow Wilson on March 2, 1917. The act superseded the Foraker Act and granted U.S. citizenship to anyone born in Puerto Rico on or after April 11, 1899. It also created the Senate of Puerto Rico, established a bill of rights, and authorized the election of a Resident Commissioner to a four-year term. The act also exempted Puerto Rican bonds from federal, state, and local taxes regardless of where the bond holder resides.

The United States House of Representatives election in the Northern Mariana Islands, 2008 took place on November 4, 2008 and was the Northern Mariana Islands' first election of a delegate to the United States House of Representatives. Since the CNMI traditionally had general elections in odd-numbered years, the November 2008 ballot contained only this office. 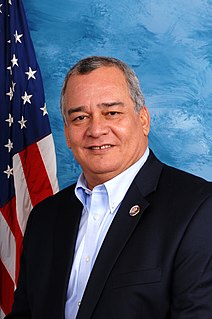 The political status of Puerto Rico is that of an unincorporated territory of the United States. As such, the island is neither a sovereign nation nor a U.S. state. Because of that ambiguity, the territory, as a polity, lacks certain rights but enjoys certain benefits that other polities have or lack. For instance, in contrast to sovereign nations, Puerto Rico does not have voting rights in its federal legislature nor in electing its federal head of state. But, in contrast to U.S. states, only some residents of Puerto Rico are subject to federal income taxes. The political status of the island thus stems from how different Puerto Rico is politically from sovereign nations and from U.S. states.

The Omnibus Territories Act of 2013 is a bill that amend laws concerning the territories of American Samoa, Guam, the U.S. Virgin Islands, and the Commonwealth of the Northern Mariana Islands. The bill would increase the size of the territory of the Northern Mariana Islands, start an energy plan for the areas, and expand turtle conservation efforts.