Last updated April 26, 2022
Distinct territorial body or political entity
Not to be confused with County.
For the rural area, see Countryside. For other uses, see Country (disambiguation).

A country or state (sometimes called nation) is a distinct territorial body or political entity. [1] It may be an independent sovereign state or part of a larger state, [2] as a non-sovereign or formerly sovereign political division, a physical territory with a government, or a geographic region associated with sets of previously independent or differently associated peoples with distinct political characteristics. It is not inherently sovereign.

The largest country is Russia, while the smallest is the microstate Vatican City. The Pitcairn Islands is the least populous, while the most populous is China.

The word country comes from Old French contrée, which derives from Vulgar Latin (terra) contrata ("(land) lying opposite"; "(land) spread before"), derived from contra ("against, opposite"). It most likely entered the English language after the Franco-Norman invasion during the 11th century.

In English the word has increasingly become associated with political divisions, so that one sense, associated with the indefinite article – "a country" – through misuse and subsequent conflation is now a synonym for state, or a former sovereign state, in the sense of sovereign territory or "district, native land". [3] An example of this in North America is Navajo Country.

Areas much smaller than a political state may be called by names such as the West Country in England, the "big country" (used in various contexts of the American West), "coal country" (used of parts of the US and elsewhere) and many other terms. [3]

The equivalent terms in various Romance languages (e.g. the French pays ) have not carried the process of being identified with sovereign political states as far as the English country. These terms are derived from the Roman term pagus , which continued to be used in the Middle Ages for small geographical areas similar to the size of English counties. In many European countries, the words are used for sub-divisions of the national territory, as in the German Bundesländer, as well as a less formal term for a sovereign state. France has very many "pays" that are officially recognised at some level and are either natural regions, like the Pays de Bray, or reflect old political or economic entities, like the Pays de la Loire.

A version of "country" can be found in modern French as contrée, derived from the Old French word cuntrée, [3] that is used similarly to the word pays to define non-state regions, but can also be used to describe a political state in some particular cases. The modern Italian contrada is a word with its meaning varying locally, but usually meaning a ward or similar small division of a town, or a village or hamlet in the countryside.

Symbols of a country indicate cultural, religious or political symbol of any nation or race the country consists of. There are many categories of symbols which can be seen in flags, coat of arms or seals.

The term "country" can refer to a sovereign state. There is no universal agreement on the number of "countries" in the world since a number of states have disputed sovereignty status. By one application of the declarative theory of statehood and constitutive theory of statehood, [8] there are 206 sovereign states; of which 193 are members of the UN, two have observer status at the United Nations General Assembly (UNGA) (the Holy See and Palestine), and 11 others are neither a member nor observer at the UNGA.

The degree of autonomy of non-sovereign countries varies widely. Some are possessions of sovereign states, with citizenry at times identical and at times distinct from their own. They are listed together alongside sovereign states on lists of countries, and many are treated as a separate "country of origin" in international trade [9] [10] as the British Virgin Islands [11] and Hong Kong are. [12] [13] [14]

A few states consist of a union of smaller polities which are considered countries, such as the Danish Realm, [15] the Kingdom of the Netherlands, [note 1] France, [16] the Realm of New Zealand, and the United Kingdom. [17]

The United Nations Department of Economic and Social Affairs annually produces the World Economic Situation and Prospects Report classifies states as developed countries, economies in transition, or developing countries. The report classifies country development based on per capita gross national income (GNI). The UN identifies subgroups within the broad categories based on geographical location or ad hoc criteria. The UN outlines the geographical regions for developing economies like Africa, East Asia, South Asia, Western Asia, Latin America and the Caribbean. The 2019 report recognises only developed countries in North America, Europe, Asia, and the Pacific. The majority of economies in transition and developing countries are found in Africa, Asia, Latin America and the Caribbean.

A developed country is a sovereign state that has a high quality of life, developed economy and advanced technological infrastructure relative to other less industrialized nations. Most commonly, the criteria for evaluating the degree of economic development are gross domestic product (GDP), gross national product (GNP), the per capita income, level of industrialization, amount of widespread infrastructure and general standard of living. Which criteria are to be used and which countries can be classified as being developed are subjects of debate. A point of reference of US$20,000 in 2021 USD nominal GDP per capita for the International Monetary Fund (IMF) is a good point of departure, it is a similar level of development to the United States in 1960. 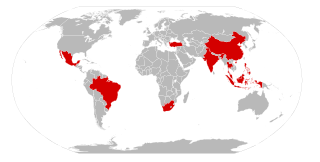 The Human Development Index (HDI) is a statistic composite index of life expectancy, education, and per capita income indicators, which are used to rank countries into four tiers of human development. A country scores a higher level of HDI when the lifespan is higher, the education level is higher, and the gross national income GNI (PPP) per capita is higher. It was developed by Pakistani economist Mahbub ul Haq and was further used to measure a country's development by the United Nations Development Programme (UNDP)'s Human Development Report Office.

The economy of Europe comprises about 748 million people in 50 countries. The formation of the European Union (EU) and in 1999, the introduction of a unified currency, the Euro, brings participating European countries closer through the convenience of a shared currency and has led to a stronger European cash flow. It is important to know the European Union is not a country, it's a global unique organisation, the entity with the biggest economy in the world. The European Union also “regulates” the global market by the Single Market. The difference in wealth across Europe can be seen roughly in former Cold War divide, with some countries breaching the divide. Whilst most European states have a GDP per capita higher than the world's average and are very highly developed, some European economies, despite their position over the world's average in the Human Development Index, are poorer. Europe has total banking assets of more than $50 trillion and its Global assets under management has more than $20 trillion.

An emerging market is a market that has some characteristics of a developed market, but does not fully meet its standards. This includes markets that may become developed markets in the future or were in the past. The term "frontier market" is used for developing countries with smaller, riskier, or more illiquid capital markets than "emerging". As of 2006, the economies of China and India are considered to be the largest emerging markets. According to The Economist, many people find the term outdated, but no new term has gained traction. Emerging market hedge fund capital reached a record new level in the first quarter of 2011 of $121 billion. The 10 largest emerging and developing economies by either nominal or PPP-adjusted GDP are 4 of the 5 BRICS countries along with Indonesia, Iran, South Korea, Mexico, Saudi Arabia, Taiwan and Turkey.

The following table lists the independent European states and their memberships in selected organisations and treaties.

The Atlas method is a method used by the World Bank since 1993 to estimate the size of economies in terms of gross national income (GNI) in U.S. dollars.

A high-income economy is defined by the World Bank as a nation with a gross national income per capita of US$12,696 or more in 2020, calculated using the Atlas method. While the term "high-income" is often used interchangeably with "First World" and "developed country," the technical definitions of these terms differ. The term "first world" commonly refers to countries that aligned themselves with the U.S. and NATO during the Cold War. Several institutions, such as the Central Intelligence Agency (CIA) or International Monetary Fund (IMF), take factors other than high per capita income into account when classifying countries as "developed" or "advanced economies." According to the United Nations, for example, some high-income countries may also be developing countries. The GCC countries, for example, are classified as developing high-income countries. Thus, a high-income country may be classified as either developed or developing. Although the Vatican City is a sovereign state, it is not classified by the World Bank under this definition.

1 These countries are currently not participating in the EU's single market (EEA), but the EU has common external Customs Union agreements with Turkey, Andorra and San Marino. Monaco participates in the EU customs union through its relationship with France; its ports are administered by the French. Vatican City has a customs union in effect with Italy.
2 Monaco, San Marino and Vatican City are not members of Schengen, but act as such via their open borders with France and Italy, respectively.
3 Switzerland is not an official member of EEA but has bilateral agreements largely with same content, making it virtual member.

—The following table lists the independent African states, and their memberships in selected organisations and treaties.