Last updated September 29, 2022
Mark indicating that "errors" in a quotation stem from the source
For other uses, see SIC (disambiguation).

The Latin adverb sic (pronounced  [siːk] ; "thus", "just as"; in full: sic erat scriptum, "thus was it written") [1] inserted after a quoted word or passage indicates that the quoted matter has been transcribed or translated exactly as found in the source text, complete with any erroneous, archaic, or otherwise nonstandard spelling, punctuation, or grammar. It also applies to any surprising assertion, faulty reasoning, or other matter that might be interpreted as an error of transcription.

The typical usage is to inform the reader that any errors or apparent errors in quoted material do not arise from errors in the course of the transcription, but are intentionally reproduced, exactly as they appear in the source text. It is generally placed inside square brackets to indicate that it is not part of the quoted matter.

Sic may also be inserted derisively or sarcastically, to call attention to the original writer's spelling mistakes or erroneous logic, or to show general disapproval or dislike of the material. [2]

Though occasionally misidentified as an abbreviated word, sic is a Latin adverb used in English as an adverb, and, derivatively, as a noun and a verb. [3] The adverb sic, meaning "intentionally so written", first appeared in English circa 1856. [4] It is derived from the Latin adverb sīc, which means "so, thus, in this manner". [5] According to the Oxford English Dictionary , the verbal form of sic, meaning "to mark with a sic", emerged in 1889, E. Belfort Bax 's work in The Ethics of Socialism being an early example. [6]

Use of sic greatly increased in the mid-20th century. [8] For example, in United States state-court opinions before 1944, sic appeared 1,239 times in the Westlaw database; in those from 1945 to 1990, it appeared 69,168 times, over 55 times as many. [2] Its use as a form of ridicule has been cited as a major factor in this increase. [2] The immoderate use of sic has created some controversy, leading some editors, including bibliographical scholar Simon Nowell-Smith and literary critic Leon Edel, to speak out against it. [9]

Sic, in its bracketed form, is most often inserted into quoted or reprinted material to indicate meticulous accuracy in reproducing the preceding text, despite appearances to the reader of an incorrect or unusual orthography (spelling, punctuation, grammar, syntax, fact, logic, etc.). [2] [10] Several usage guides recommend that a bracketed sic be used primarily as an aid to the reader, not as an indicator of disagreement with the source. [2] [11]

Use to denote archaisms and dialect

Sic may show that an uncommon or archaic expression is reported faithfully, [12] [ failed verification ] such as when quoting the U.S. Constitution: "The House of Representatives shall chuse[sic] their Speaker ..." However, several writing guidebooks discourage its use with regard to dialect, such as in cases of American and British English spelling differences. [8] [11] [13] The appearance of a bracketed sic after the word analyse in a book review led Bryan A. Garner to comment, "all the quoter (or overzealous editor) [sic] demonstrated was ignorance of British usage". [2]

Occasionally a writer places [sic] after their own words, to indicate that the language has been chosen deliberately for special effect, especially where the writer's ironic meaning may otherwise be unclear. [14] Bryan A. Garner dubbed this use of sic "ironic", providing the following example from Fred Rodell 's 1955 book Nine Men: [2]

[I]n 1951, it was the blessing bestowed on Judge Harold Medina's prosecution [sic] of the eleven so-called 'top native Communists,' which blessing meant giving the Smith Act the judicial nod of constitutionality.

Where sic follows the quotation, it takes brackets: [sic]. [15] The word sic is usually treated as a loanword that does not require italics, and the style manuals of New Zealand, Australian and British media outlets generally do not require italicisation. [11] However, italicization is common in the United States, where authorities including APA Style insist upon it. [16]

Because sic is not an abbreviation, placing a full stop/period inside the brackets after the word sic is erroneous, [17] [18] although the California Style Manual suggests styling it as a parenthetical sentence only when used after a complete sentence, like so: (Sic.) [15]

Some guides, including The Chicago Manual of Style , recommend "quiet copy-editing" (unless where inappropriate or uncertain) instead of inserting a bracketed sic, such as by substituting in brackets the correct word in place of the incorrect word or by simply replacing an incorrect spelling with the correct one. [2] [19]

Alternatively, to show both the original and the suggested correction (as they often are in palaeography), one may give the actual form, followed by recte, then the correct form, in brackets. The Latin adverb recte means rightly. [20]

An Iraqi battalion has consumed [recte assumed] control of the former American military base, and our forces are now about 40 minutes outside the city.

According to the Journal of Seventeenth-Century Music Style Sheet, there should be no punctuation, for example no colon, before the correct form when using recte. [21]

A third alternative is to follow an error with sic, a comma or colon, "read", and the correct reading, all within square brackets, as in the following example:

A split infinitive is a grammatical construction in which an adverb or adverbial phrase separates the "to" and "infinitive" constituents of what was traditionally called the full infinitive, but is more commonly known in modern linguistics as the to-infinitive. In the history of English language aesthetics, the split infinitive was often deprecated, despite its prevalence in colloquial speech. The opening sequence of the Star Trek television series contains a well-known example, "to boldly go where no man has gone before", wherein the adverb boldly was said to split the full infinitive, to go. Multiple words may split a to-infinitive, such as: "The population is expected to more than double in the next ten years."

The comma, is a punctuation mark that appears in several variants in different languages. It has the same shape as an apostrophe or single closing quotation mark in many typefaces, but it differs from them in being placed on the baseline of the text. Some typefaces render it as a small line, slightly curved or straight, but inclined from the vertical. Other fonts give it the appearance of a miniature filled-in figure 9 on the baseline.

The apostrophe is a punctuation mark, and sometimes a diacritical mark, in languages that use the Latin alphabet and some other alphabets. In English, the apostrophe is used for two basic purposes:

A bracket is either of two tall fore- or back-facing punctuation marks commonly used to isolate a segment of text or data from its surroundings. Typically deployed in symmetric pairs, an individual bracket may be identified as a 'left' or 'right' bracket or, alternatively, an "opening bracket" or "closing bracket", respectively, depending on the directionality of the context.

The hyphen‐ is a punctuation mark used to join words and to separate syllables of a single word. The use of hyphens is called hyphenation. Son-in-law is an example of a hyphenated word. The hyphen is sometimes confused with dashes, which are longer and have different uses, or with the minus sign −, which is also longer and more vertically centred in some typefaces.

In English writing, quotation marks or inverted commas, also known informally as quotes, talking marks, speech marks, quote marks, quotemarks or speechmarks, are punctuation marks placed on either side of a word or phrase in order to identify it as a quotation, direct speech or a literal title or name. Quotation marks may be used to indicate that the meaning of the word or phrase they surround should be taken to be different from that typically associated with it, and are often used in this way to express irony. They also sometimes appear to be used as a means of adding emphasis, although this usage is usually considered incorrect.

In rhetoric, a parenthesis or parenthetical phrase is an explanatory or qualifying word, clause, or sentence inserted into a passage. The parenthesis could be left out and still form grammatically correct text. Parenthetical expressions are usually delimited by round or square brackets, dashes, or commas. 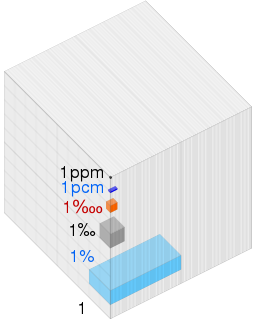 Per mille is an expression that means parts per thousand. Other recognised spellings include per mil, per mill, permil, permill, or permille.

"Between you and I" is an English phrase that has drawn considerable interest from linguists, grammarians, and stylists. It is commonly used by style guides as a convenient label for a construction where the nominative/subjective form of pronouns is used for two pronouns joined by and in circumstances where the accusative/oblique case would be used for a single pronoun, typically following a preposition, but also as the object of a transitive verb. One frequently cited use of the phrase occurs in Shakespeare's The Merchant of Venice (1596–98). According to many style guides, the Shakespearian character who used the phrase should have written "between you and me". Use of this common construction has been described as "a grammatical error of unsurpassable grossness", although whether it is in fact an error is a matter of debate.

In English-language punctuation, a serial comma is a comma placed immediately after the penultimate term in a series of three or more terms. For example, a list of three countries might be punctuated either as "France, Italy and Spain" or "France, Italy, and Spain".

Oxford spelling is a spelling standard, named after its use by the University of Oxford, that prescribes the use of British spelling in combination with the suffix -ize in words like realize and organization, in contrast to use of -ise endings.

The dash is a punctuation mark consisting of a long horizontal line. It is similar in appearance to the hyphen but is longer and sometimes higher from the baseline. The most common versions are the en dash–, generally longer than the hyphen but shorter than the minus sign; the em dash—, longer than either the en dash or the minus sign; and the horizontal bar―, whose length varies across typefaces but tends to be between those of the en and em dashes.

The full stop, period, or full point., is a punctuation mark. It is used for several purposes, most often to mark the end of a declarative sentence. This sentence-ending use, alone, defines the strictest sense of full stop. Although full stop technically applies only when the mark is used to end a sentence, the distinction – drawn since at least 1897 – is not maintained by all modern style guides and dictionaries.

Look up sic in Wiktionary, the free dictionary.
This page is based on this Wikipedia article
Text is available under the CC BY-SA 4.0 license; additional terms may apply.
Images, videos and audio are available under their respective licenses.