Last updated June 16, 2020
Facility directly owned and operated by or for the military

A military base is a facility directly owned and operated by or for the military or one of its branches that shelters military equipment and personnel, and facilitates training and operations. [1] A military base provides accommodations for one or more units, but it may also be used as a command center, training ground or proving ground. In most cases, military bases rely on outside help to operate. However, certain complex bases are able to endure on their own for long periods because they are able to provide food, water and other necessities for their inhabitants while under siege. Bases for military aviation are called military air bases, or simply "air bases". Bases for military ships are called naval bases.

Military bases within the United States are considered federal property and are subject to federal law. Civilians (such as family members of military officers) living on military bases are generally subject to the civil and criminal laws of the states where the bases are located. [2] Military bases can range from small outposts to military cities containing up to 100,000 people. A military base may belong to a different nation or state than the territory surrounding it.

The name used generally refers to the type of military activity that takes place at the base, as well as the traditional nomenclature used by a branch of service.

A military base may go by any of a number of names, such as the following:

Depending on the context, the term 'military base' may refer to any establishment (usually permanent) that houses a nation's armed forces, or even organized paramilitary forces such as the Police, Constabulary, Militia, or Guards. Alternatively, the term may refer solely to an establishment which is used only by an army (or possibly other land fighting related forces, such as marines) to the exclusion of a base used by either an air force or a navy. This is consistent with the different meanings of the word 'military'.

Some examples of permanent military bases used by the navies and air forces of the world are the HMNB Portsmouth in Portsmouth, UK, the Naval Air Station Whidbey Island, Washington State, USA, or Ramstein Air Base, Germany (the last two are each designated as a Main Operating Base). Other examples of non- or semi-permanent military bases include a Forward Operating Base (FOB), a Logistics Base (Log base) and a Fire Base (FB).

A military base may also contain large concentrations of military supplies in order to support military logistics. Most military bases are restricted to the public and usually only authorized personnel may enter them (be it military personnel or their relatives and authorized civilian personnel).

Bases used by the United States Air Force Reserve tend to be active USAF bases. However, there are a few Air Reserve Bases, such as Dobbins ARB, Georgia, and Grissom ARB, Indiana, both of which are former active-duty USAF bases. Facilities of the Air National Guard are often located on civil airports in a secure cantonment area not accessible to the general public, though some units are based on USAF bases, and a few ANG-operated bases, such as Selfridge ANGB, Michigan. Support facilities on Air National Guard and Air Force Reserve installations tend to not be as extensive as active bases; i.e., they usually do not have on-base lodging (though Kingsley Field ANGB, Oregon, is an exception), clinics (except for drill days), or retail stores (although some have small convenience stores)

In Russian usage "military base" or "naval base" is not limited to denoting a specific fence described facility and usually encompasses a broad territory within which a number of discrete facilities may be located. As an examples, 1) the Russian Sevastopol Naval Base comprises individual facilities located within the city of Sevastopol proper (waterfront moorings, weapons stores, a headquarters compound, and a naval infantry base) as well as an airfield at Kacha north of the city; 2) the Leningrad Naval Base comprises all naval facilities in the greater St. Petersburg area including training schools, commissioning institutes, the naval academy, and the Kronshtadt base on Kotlin island.

An overseas military base is a military base that is geographically located outside of the territory of the country whose armed forces are the principal occupants of the base.

Furthermore, overseas military bases often serve as the source of the military brat subculture due to the children of the bases' occupant military being born or raised in the host country but raised with a remote parental knowledge of the occupant military's home country.

In the 18th and 19th Centuries the Royal Engineers were largely responsible for erecting military bases in the British Isles and the British Empire. In 1792 the Chief Engineer was instructed to prepare the Barrack Construction estimates for Parliament and at the same time the Department of the Barrackmaster-General was established.

During the period from the 1840s through the 1860s barracks were constructed under supervision of the Royal Engineers in:

Some British and Commonwealth naval bases are traditionally named, commissioned, and administered as though they were naval ships. For this reason they are sometimes called stone frigates.

Most countries with military aviation forces have a system for naming of military airbases. "Air Force Base" ("AFB") is part of the name of military airbases of the United States Air Force (USAF) and the South African Air Force (SAAF), with the USAF using it at the end of the name of the base, and the SAAF using it at the start. The Royal Australian Air Force uses a slightly different format referring to bases as "RAAF Base". The Canadian Forces also uses a different format referring to any base as "CFB" or "BFC" in French. 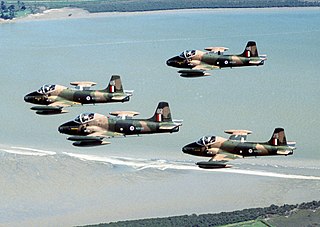 A flight is a military unit in an air force, naval air service, or army air corps. It is usually composed of three to six aircraft, with their aircrews and ground staff; or, in the case of a non-flying ground flight, no aircraft and a roughly equivalent number of support personnel. In most usages, multiple flights make up a squadron. The "flight" is also a basic unit for intercontinental ballistic missiles. Foreign languages equivalents include escadrille (French), escuadrilla (Spanish), esquadrilha (Portuguese) and Schwarm (German).

Lackland Air Force Base is a United States Air Force base located in Bexar County, Texas. The base is under the jurisdiction of the 802d Mission Support Group, Air Education and Training Command (AETC) and an enclave of the city of San Antonio. It is the only entry processing station for Air Force enlisted Basic Military Training (BMT). 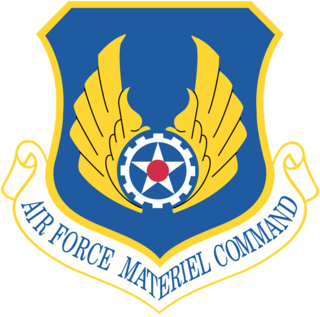 A naval air station is a military air base, and consists of a permanent land-based operations locations for the military aviation division of the relevant branch of a navy. These bases are typically populated by squadrons, groups or wings, their various support commands, and other tenant commands. 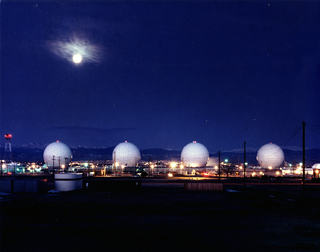 Buckley Air Force Base is a United States Air Force base in Aurora, Colorado, that was established by the U.S. Army as an auxiliary field and bombing range in 1938, and activated as a designated installation in 1941. The base was named in honor of World War I Army pilot First Lieutenant John Harold Buckley.

Pepperrell Air Force Base, previously known as Fort Pepperrell, is a decommissioned United States military base located in St. John's, Newfoundland, Canada which operated from 1941-1961.

Naval Air Station Keflavik (NASKEF) is a U.S. Navy base at Keflavík International Airport, Iceland. It is located on the Reykjanes peninsula on the south-west portion of the island. Built during World War II by the United States Army as part of its mission to maintain the defense of Iceland and secure northern Atlantic air routes, it served to ferry personnel, equipment, and supplies to Europe. Intended as a temporary wartime base under an agreement with Iceland and the British, US forces withdrew by 1947, but returned in 1951 as the Iceland Defense Force, now operating a NATO base. NASKEF was closed on 8 September 2006 and its facilities taken over by the Icelandic Defence Agency as their primary base until 1 January 2011 when the Agency was abolished and the base handed over to the Icelandic Coast Guard which has since then operated the base. The base is regularly visited by the American military and other NATO allies, for military exercises, NATO Air Policing and other tasks. In 2017 the United States announced its intention to modify the largest hangar on the airbase in order to house the new Boeing P-8 Poseidon ASW aircraft being introduced.

Parks Reserve Forces Training Area (PRFTA), commonly known as Camp Parks, is a United States Army facility located in Dublin, California that is currently a semi-active mobilization and training center for U.S. Army Reserve personnel to be used in case of war or natural disaster.

The Naval Facilities Engineering Command (NAVFAC) is the United States Navy's engineering command, committed to the Navy's and United States Marine Corps' combat readiness. NAVFAC is headquartered at the Washington Navy Yard and is under the command of the Chief of Civil Engineers RADM John W. Korka

The Grand Prairie Armed Forces Reserve Complex is a former United States Navy Naval Air Station located on Mountain Creek Lake in southwest Dallas. The installation was originally established as an Army Aviation center, and eventually became home to aviation assets from all the military services. The facility was decommissioned as a naval air station in December 1998 pursuant to BRAC action and the extant Naval Air Reserve, Marine Air Reserve and Texas Air National Guard flying units relocating to the nearby former Carswell AFB, which was concurrently transferred to U.S. Navy custody via the Base Realignment and Closure Commission action and renamed Naval Air Station Joint Reserve Base Fort Worth / Carswell Field.

An Air Operations Center (AOC) is a type of command center used by the United States Air Force (USAF). It is the senior agency of the Air Force component commander to provide command and control of air operations.

Naval Support Activity Hampton Roads is a United States Navy Echelon 4 regional support commander that is responsible to Navy Region Mid-Atlantic for the operation and maintenance of the installation of the same name that it is headquartered on. Adjacent to, but separate from Naval Station Norfolk, NSA Hampton Roads has the largest concentration of fleet headquarters administrative and communication facilities outside of Washington, D.C., including the headquarters for United States Fleet Forces Command, Naval Reserve Forces Command and United States Marine Corps Forces Command, along with components of the Joint Chiefs of Staff, and the Joint Forces Staff College. NSA Hampton Roads is also home to NATO's Allied Command Transformation.