Last updated April 16, 2021
Military base; collective term for a body of troops stationed in a particular location
For other uses, see Garrison (disambiguation).

Garrison (various spellings) (from the French garnison, itself from the verb garnir, "to equip") is the collective term for any body of troops stationed in a particular location, originally to guard it. The term now often applies to certain facilities that constitute a military base or fortified military headquarters. A garrison is usually in a city, town, fort, castle, ship, or similar site. "Garrison town" is a common expression for any town that has a military base nearby.

"Garrison towns" (Arabic : حصون‎) were used during the Arab Islamic conquests of Middle Eastern lands by Arab-Muslim armies to increase their dominance over indigenous populations. [1] In order to occupy non-Arab, non-Islamic areas, nomadic Arab tribesmen were taken from the desert by the ruling Arab elite, conscripted into Islamic armies, and settled into garrison towns as well as given a share in the spoils of war. The primary utility of the Arab-Islamic garrisons was to control the indigenous non-Arab peoples of these conquered and occupied territories, and to serve as garrison bases to launch further Islamic military campaigns into yet-undominated lands. A secondary aspect of the Arab-Islamic garrisons was the uprooting of the aforementioned nomadic Arab tribesmen from their original home regions in the Arabian Peninsula in order to proactively avert these tribal peoples, and particularly their young men, from revolting against the Islamic state established in their midst.

In the United Kingdom, "Garrison" also specifically refers to any of the major military stations such as Aldershot, Catterick, Colchester, Tidworth, Bulford, and London, which have more than one barracks or camp and their own military headquarters, usually commanded by a colonel, brigadier or major-general, assisted by a garrison sergeant major. In Ireland, Association football (as distinct from Gaelic football) has historically been termed the "garrison game" or the "garrison sport" for its connections with British military serving in Irish cities and towns. [2]

The Umayyad Caliphate was the second of the four major caliphates established after the death of Muhammad. The caliphate was ruled by the Umayyad dynasty. The third caliph of the Rashidun Caliphate, Uthman ibn Affan, was also a member of the Umayyad clan. The family established dynastic, hereditary rule with Muawiya ibn Abi Sufyan, long-time governor of al-Sham, who became the sixth caliph after the end of the First Muslim Civil War in 661. After Mu'awiyah's death in 680, conflicts over the succession resulted in a Second Civil War and power eventually fell into the hands of Marwan I from another branch of the clan. The region of Syria remained the Umayyads' main power base thereafter, and Damascus was their capital. 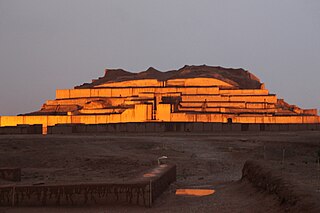 Khuzestan Province is one of the 31 provinces of Iran. It is in the southwest of the country, bordering Iraq and the Persian Gulf. Its capital is Ahvaz and it covers an area of 63,238 square kilometres (24,416 sq mi). Since 2014 it has been part of Iran's Region 4. 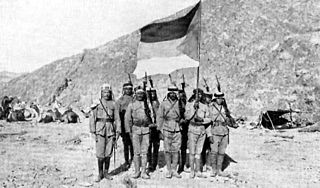 The Arab Revolt or the Great Arab Revolt was a military uprising of Arab forces against the Ottoman Empire in the Middle Eastern theatre of World War I. On the basis of the McMahon–Hussein Correspondence, an agreement between the British government and Hussein bin Ali, Sharif of Mecca, the revolt was officially initiated at Mecca on June 10, 1916. The aim of the revolt was to create a single unified and independent Arab state stretching from Aleppo in Syria to Aden in Yemen, which the British had promised to recognize.

A settler is a person who has migrated to an area and established a permanent residence there, often to colonize the area.

Bilad al-Sham, often referred to as Islamic Syria or Syria in English-language sources, was a super-province of the Rashidun, Umayyad, Abbasid, and Fatimid caliphates. It roughly corresponded with the Byzantine Diocese of the East, conquered by the Muslims in 634–647. Under the Umayyads (661–750) Bilad al-Sham was the metropolitan province of the Caliphate and different localities throughout the province served as the seats of the Umayyad caliphs and princes.

Banu al-Kanz was a semi-nomadic Muslim dynasty of mixed Arab–Beja ancestry that ruled the border region between Upper Egypt and Nubia between the 10th and 15th centuries. They were descended from the sons of sheikhs of the Arab Banu Rabi'ah tribe and princesses of the Beja Hadariba tribe. They gained official control over the region of Aswan, Wadi Allaqi and the frontier zone in the early 11th century when their chief, Abu al-Makarim Hibatallah, captured a major rebel on behalf of the Fatimid authorities. Abu al-Makarim was accorded the title Kanz al-Dawla by Caliph al-Hakim and his successors inherited the title. The Banu Kanz entered into conflict with the Ayyubids in 1174, during which they were defeated and forced to migrate southward into northern Nubia, where they helped accelerate the expansion of Islam in the mostly Christian region. They eventually assumed control of the Nubian Kingdom of Makuria in the early 14th century, but by the early the 15th century, they were supplanted by the Hawwara tribesmen dispatched by the Mamluks to combat the Banu Kanz. Their modern-day descendants are a Sudanese tribe known as the "Kunuz", who live in the far north of the country. 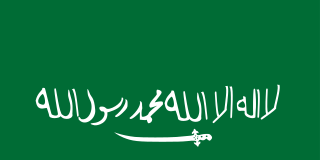 The Ikhwan, also Akhwan, was the first Saudi army made up of traditionally nomadic tribesmen which formed a significant military force of the ruler Ibn Saud and played an important role in establishing him as ruler of most of the Arabian Peninsula in the Kingdom of Saudi Arabia. The Ikhwan later became the Saudi Arabian National Guard. 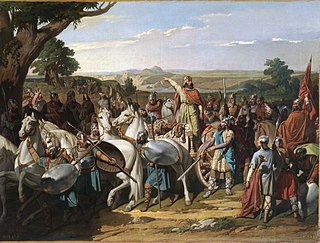 The early Muslim conquests, also referred to as the Arab conquests and the early Islamic conquests began with the Islamic prophet Muhammad in the 7th century. He established a new unified polity in the Arabian Peninsula which under the subsequent Rashidun and Umayyad Caliphates saw a century of rapid expansion.

The Banu Kalb or Kalb ibn Wabara was an Arab tribe. Prior to the Muslim conquest of Syria in the 630s, the Kalb's territory spanned much of northwestern Arabia, the Palmyrene steppe, the Samawah, the Hawran plain and the Golan Heights. One of their main centers was the desert town of Dumat al-Jandal. The Kalb were involved in the tribal affairs of the eastern frontiers of the Byzantine Empire from the 4th century and were likely the tribe of Mavia, the Bedouin queen of southern Syria. By the 6th century, the Kalb had largely become Monophysite Christians and came under the military authority of the Ghassanids, Arab vassals of the Byzantines.

The Berbers are an indigenous ethnic group of the Maghreb region of North Africa. Following the Muslim conquest of the Maghreb, most Berber tribes eventually became Muslims. Presently, about one-sixth of the population of Maghreb speaks one of the Berber languages, but most of them also speak some form of Arabic. Berbers are the first non-Arab people to have established an Islamic state.

Indigenism can refer to several different ideologies associated with indigenous peoples, is used differently by a various scholars and activists, and can be used purely descriptively or carry political connotations.

Khalid ibn al-Walid ibn al-Mughira al-Makhzumi was an Arab Muslim commander in the service of the Islamic prophet Muhammad and the caliphs Abu Bakr and Umar who played a leading role in the Ridda wars against rebel tribes in Arabia in 632–633 and the early Muslim conquests of Sasanian Iraq in 633–634 and Byzantine Syria in 634–638.

Arak is a village in eastern Syria, administratively part of the Homs Governorate. It is situated on an oasis in the Syrian Desert along the road between Palmyra which is 28 kilometers to the southwest and al-Sukhnah to the northeast. According to the Central Bureau of Statistics of Syria (CBS), Arak had a population of 111 in the 2004 census.

Under the early Caliphates, jund was a term for a military division, which became applied to Arab military colonies in the conquered lands and, most notably, to the provinces into which Greater Syria was divided. The term later acquired various meanings throughout the Muslim world.

′Uqayribat also spelled Oqeirbat, Uzeiribat, ′Aqayrbat, ′Agareb, Aaqerbate, Occariba or Occaraba is a Syrian town in the Uqayribat Subdistrict of the Salamiyah District in Hama Governorate. It is situated at the western foot of Jabal Bal'as and along the route connecting Palmyra (Tadmur) to the southeast with Salamiyah to the west. According to the Syria Central Bureau of Statistics (CBS), ′Uqayribat had a population of 2,745 in the 2004 census.

Bāhila was an Arab tribe based in Najd. Part of the tribe was settled and part of it was semi-nomadic. The Bahila was first mentioned during the early years of Islam, in the mid-7th century. During that time, many Bahila tribesmen migrated to Syria and Basra. Many of those who went to Syria later moved to Khurasan as part of the Umayyad garrison there. As a sub-tribe of Qays, they fought alongside the Qaysi coalition against the Yamani tribes during the Umayyad era. The scholar al-Asma'i and the general Qutayba ibn Muslim both belonged to the tribe. The Bahila were last mentioned in the 10th century.

The Iyad were an Arab tribe which dwelt in western lower and upper Mesopotamia and northern Syria during the 3rd–7th centuries CE. Parts of the tribe adopted Christianity in the mid-3rd century and came under the suzerainty of the Lakhmid kings of al-Hirah, vassals of the Sasanian Empire. From this period onward, parts of the tribe became settled in towns and villages along the Euphrates, while other parts remained nomadic and dwelt in the neighboring desert steppes. The Iyad played a significant role among the Arab tribes in the Fertile Crescent before the advent of Islam, as allies and opponents of the Sasanians and later allies of the Byzantine Empire. As the early Muslim conquests were underway, parts of the tribe in lower Mesopotamia embraced Islam, while those established in northern Syria and Upper Mesopotamia fled with the retreating Byzantine armies into Anatolia. They were expelled by Emperor Heraclius to Muslim territory after pressure by Caliph Umar. Little is heard of the tribe afterward, though a number of Iyad tribesmen served as qadis in different provinces of the Abbasid Caliphate in the 9th century and a family of the Iyad, that of Ibn Zuhr, grew prominent in Muslim Spain.

Al-Jazira, also known as Jazirat Aqur or Iqlim Aqur, was a province of the Rashidun, Umayyad and Abbasid caliphates, spanning at minimum most of Upper Mesopotamia, divided between the districts of Diyar Bakr, Diyar Rabi'a and Diyar Mudar, and at times including Mosul, Arminiya and Adharbayjan as sub-provinces. Following its conquest by the Muslim Arabs in 639/40, it became an administrative unit attached to the larger district of Jund Hims. It was separated from Hims during the reigns of caliphs Mu'awiya I or Yazid I and came under the jurisdiction of Jund Qinnasrin. It was made its own province in 692 by Caliph Abd al-Malik. After 702, it frequently came to span the key districts of Arminiya and Adharbayjan along the Caliphate's northern frontier, making it a super-province. The predominance of Arabs from the Qays/Mudar and Rabi'a groups made it a major recruitment pool of tribesmen for the Umayyad armies and the troops of the Jazira played a key military role under the Umayyad caliphs in the 8th century, peaking under the last Umayyad caliph, Marwan II, until the toppling of the Umayyads by the Abbasids in 750.