Londonderry is a town in western Rockingham County, New Hampshire, United States. It sits between Manchester and Derry, the largest and fourth-largest communities in the state. The population was 24,129 at the 2010 census [1] and an estimated 26,490 in 2019, reflecting an estimated 10.3% increase. [2] Londonderry is known for its apple orchards [3] and is home to the headquarters of Stonyfield Farm and part of Manchester-Boston Regional Airport.

The more densely settled portion of town, where 11,037 people lived at the 2010 census, [4] is defined as the Londonderry census-designated place (CDP) and roughly occupies the southeastern and southern parts of town, around New Hampshire Route 102.

Londonderry lies in an area that was first known as Nutfield because of the dense woods with nut trees. A petition for the town was submitted to the General Court of the Province of New Hampshire on September 23, 1719. [5] That petition stated that the petitioners had settled “at Nutfield about the Eleventh of Aprile last” – i.e. April 11, 1719. That petition requested “ten miles square” and stated that there were now about seventy families and inhabitants from both Ireland and New England. Many of the Scots-Irish settlers had left their homes in Londonderry in the Province of Ulster in the north of Ireland, and arrived in Boston in 1718 to start a new life without religious wars and persecution. On June 21, 1722, the town was chartered and given the name "Londonderry". [6] [7] [8] The grant made by Samuel Shute, Governor of the Province of New Hampshire, was for a tract of land described as follows:

The town was divided into two parishes on February 25, 1739/40. Windham was set off and incorporated on February 12, 1741/42. The northwest portion, with other land, was incorporated as Derryfield, now Manchester, on September 3, 1751. Derry was incorporated on July 2, 1827. Border adjustments and annexations were made throughout this period continuing until June 27, 1857, when the line with Hudson (formerly known as Nottingham West) was established.

Approval of the petition submitted to the Province of New Hampshire required the petitioners to obtain an agreement from Col. John Wheelwright for the sale of the land. He held claim to it based on a grant to his grandfather. That agreement was obtained on October 12, 1719, and included a statement of the bounds, extending west as far as the Merrimack River. [9] This conflicted with a grant for the town of Dunstable, now Nashua, made by the Massachusetts Bay Colony in 1673. [10] The provincial line between Massachusetts and New Hampshire was not settled in its present location until 1741. Thus when Londonderry was granted, the westernmost portion actually lay within the Dunstable grant and the Province of Massachusetts Bay. The resulting land conflicts with "Dunstable encroachers" were still being dealt with by the town in 1783 and 1791. [11] Private owners were resolving these conflicts between each other as late as 1812. [12]

The Manchester and Lawrence Railroad was opened in November 1849, [13] with depots at North Londonderry, Wilson's Crossing, Derry and Windham. Two months later, on January 26, 1850, Dearborn Whittier, a prominent resident, was hit and killed by a railroad car at Wilson's Crossing. [14] On March 12 the town voted to require gates at all crossings, although the issue persisted for a few more years. [15]

In 1719, the first American potato was grown in Derry, then a part of Londonderry. [17]

Londonderry is the westernmost municipality in Rockingham County. It is bordered by the towns of Auburn to the northeast, Derry to the east, and Windham to the southeast, all in Rockingham County, and by Hudson to the south, Litchfield to the west, and Manchester to the north, in Hillsborough County. According to the United States Census Bureau, the town has a total area of 42.1 square miles (109.1 km2), of which 42.0 square miles (108.7 km2) is land and 0.1 square miles (0.3 km2) is water, comprising 0.31% of the town. [1]

The town of Londonderry is drained on the east and south by Beaver Brook and on the west by Little Cohas Brook, Watts Brook, Colby Brook and Nesenkeag Brook, all of which flow to the Merrimack River. The town's highest point is 535 feet (163 m) above sea level, on Number Eight Hill (named after the old school house that used to be on it) north of the center of town.

Though Londonderry has grown to become one of the larger towns, by population, in the state, it lacks any concentrated downtown area, central business district, or town center. Historically, no village had developed in Londonderry, as it was largely a rural farming area. Population growth in the town only began in the 1970s, when the construction of I-93 turned Londonderry into a bedroom community and exurb for the Greater Boston area. The major retail district lies in the town's southeastern corner near where NH 102 interchanges with I-93, with smaller commercial districts lying at the intersection of NH 128 and NH 102, and near where NH 28 and NH 128 merge. The Town Hall and schools are built near the geographic center of the town along an otherwise rural stretch of NH 128.

Londonderry has a four-season humid continental climate (Köppen Dfa), with long, cold, snowy winters, and very warm and somewhat humid summers; spring and fall in between are crisp and relatively brief transitions. Precipitation is well-spread throughout the year, including snowfall in the winter.

Londonderry is home to numerous businesses, many of which are located in the northern part of the town near Manchester-Boston Regional Airport (MHT), or in the southeastern part of town near I-93, on NH 102. Major businesses headquartered in town include Stonyfield Farm and Blue Seal Feeds; a bottling facility of the Coca-Cola Bottling Co. is also located in town. The town is also home to numerous chain retailers.[ citation needed ]

Mack's Apples, Sunnycrest Farm, and Elwood Orchards are among the several orchards in town and are emblematic of the town's important farming heritage. The abundance of apple orchards in town has made apple picking a popular fall activity among all residents.[ citation needed ]

One former apple orchard is currently being transformed into a 600-acre commercial and residential development to be known as Woodmont Commons. [3]

Londonderry is crossed by three New Hampshire state highways and one Interstate Highway.

Londonderry is partially home to the Manchester–Boston Regional Airport which it shares with the city of Manchester. There is no passenger rail service in Londonderry.

Londonderry has leaned considerably towards Republican in all elections, but the town has become more competitive in recent years. In 2020, Donald Trump received 49.8% of the vote, and Joe Biden received 48.7% of the vote.[ citation needed ]

The town is served by the Londonderry School District.

Media outlets that cover Londonderry include the Londonderry Times and the Derry News.[ citation needed ] 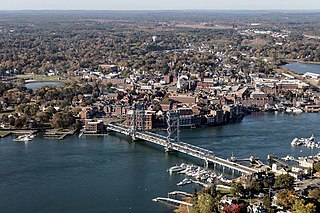 Rockingham County is a county in the U.S. state of New Hampshire. As of the 2020 census, the population was 314,176, making it New Hampshire's second-most populous county. The county seat is Brentwood. Rockingham County is part of the Boston-Cambridge-Newton, MA-NH Metropolitan Statistical Area and the greater Boston-Worcester-Providence, MA-RI-NH-CT Combined Statistical Area. Per the 2020 census, it was New Hampshire's fastest growing county from 2010-2020.

Litchfield is a town in Hillsborough County, New Hampshire, United States. The population was 8,271 at the 2010 census, with an estimated population in 2017 of 8,502.

Hampstead is a town in Rockingham County, New Hampshire, United States. The population was 8,523 at the 2010 census. Hampstead, which includes the village of East Hampstead, is home to a portion of the Rockingham Recreational Trail.

Salem is a town in Rockingham County, New Hampshire, United States. The population was 28,776 at the 2010 census. Being located on Interstate 93 as the first town in New Hampshire, which lacks any state sales tax, Salem has grown into a commercial hub, anchored by the Mall at Rockingham Park. Other major sites include Canobie Lake Park, a large amusement park; and America's Stonehenge, a stone structure of disputed origins. It is the former home of Rockingham Park, a horse racetrack. The Sununu political family hails from Salem, including former New Hampshire governor and White House Chief of Staff John H. Sununu, and his sons John E. Sununu, a former U.S. senator, and Chris Sununu, current New Hampshire governor. 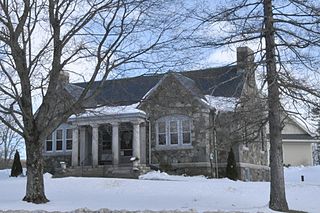 Stratham is a town in Rockingham County, New Hampshire, United States. The town had a population of 7,255 at the 2010 census, and an estimated population of 7,280 in 2013. It is bounded on the west by the Squamscott River. The town is the home of the only U.S. Lindt & Sprüngli factory and the headquarters of the Timberland Corporation.

Derry is a census-designated place (CDP) in the town of Derry in Rockingham County, New Hampshire, United States. The CDP comprises the urban center of the town, as well as the village of East Derry and connected suburban areas. The population of the CDP was 22,015 at the 2010 census, out of 33,109 people in the entire town of Derry. 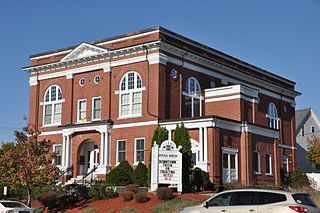 Derry is a town in Rockingham County, New Hampshire, United States. The population was 34,317 at the 2020 Census. Although it is a town and not a city, Derry is the fourth most populous community in the state. The town's nickname, "Spacetown", derives from the fact that Derry is the birthplace of Alan Shepard, the first astronaut from the United States in space. Derry was also for a time the home of the poet Robert Frost and his family.

Hudson is a town in Hillsborough County, New Hampshire, United States. It is located along the Massachusetts state line. The population was 24,467 at the 2010 census, with an estimated population of 25,619 in 2019. It is the tenth-largest municipality in the state, by population.

New Hampshire Route 111 is a 50.027-mile-long (80.511 km) east–west highway in Hillsborough and Rockingham counties in southeastern New Hampshire. The road runs from the Massachusetts border at Hollis to North Hampton on the Atlantic shore.

New Hampshire Route 28 is an 85.413-mile-long (137.459 km) north–south state highway in eastern New Hampshire. It connects the town of Ossipee in east-central New Hampshire with Salem on the Massachusetts border, while passing through Manchester, the largest city in the state.

New Hampshire Route 102 is a 23.956-mile-long (38.553 km) state highway in Rockingham and Hillsborough counties in the southern part of the U.S. state of New Hampshire. NH 102 runs southwest to northeast between Hudson and Raymond, but is signed as an east–west route.

New Hampshire Route 121 is a 22.555-mile-long (36.299 km) north–south state highway in Rockingham and Hillsborough counties in southeastern New Hampshire. The road winds through the communities of Atkinson, Hampstead, Sandown, Derry, Chester, and Auburn. The southern terminus of NH 121 is at the Massachusetts state line in Plaistow, where the road, named Atkinson Depot Road, continues into the city of Haverhill as an unnumbered local road leading to Route 125. The northern terminus is at a traffic circle, where NH 121 meets New Hampshire Route 28 Bypass in eastern Manchester. At this point, the road is known as Manchester Road. 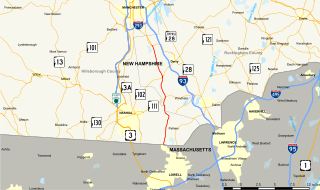 New Hampshire Route 128 is a 16.059-mile-long (25.844 km) north–south highway in southeastern New Hampshire. NH 128 runs from the Massachusetts border in Pelham northward to Londonderry, south of Manchester. NH 128 is named Mammoth Road throughout its entire length.

Mammoth Road is a north–south road in Massachusetts and New Hampshire. The road runs from its origin in Lowell, Massachusetts to its northern end in Hooksett, New Hampshire, a suburb of Manchester. The total length of the road is 29.3 miles (47.2 km). It was named "Mammoth" in the hope that the convenience of its directness and elimination of smaller connecting roads between thoroughfares would result in sufficient use and prestige as to "kill all the other roads." 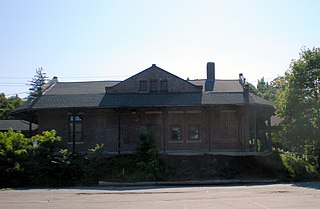 The Manchester and Lawrence Railroad was a railroad company that was chartered in New Hampshire, United States, by businessmen from Manchester, to build a rail line from that city to the Massachusetts state line. 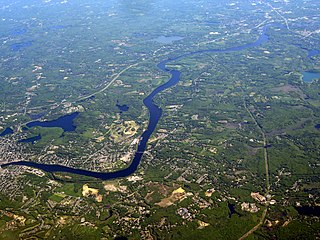 The Merrimack Valley is a bi-state region along the Merrimack River in the U.S. states of New Hampshire and Massachusetts. The Merrimack is one of the larger waterways in New England and has helped to define the livelihood and culture of those living along it for millennia.