New Hampshire Public Radio (NHPR) is the National Public Radio member network serving the state of New Hampshire. NHPR is based in Concord and operates eight transmitters and six translators covering nearly the whole state, as well as portions of Massachusetts, Vermont and Maine. The network airs NPR news and talk shows on weekdays and a mix of cultural and music programs on weekends.

NHPR's news staff of 21 is one of the largest in the state and is the only statewide source of radio news.

NHPR's original station, WEVO, signed on from Concord on August 4, 1981. It was originally known as "Granite State Public Radio," after New Hampshire's state nickname. Prior to its sign-on, New Hampshire was one of the few states in New England without a clear signal from an NPR station.

WEVO had 500 members at its start. Over several years the station grew in size. In 1991, the newly renamed NHPR began broadcasting 24 hours a day, seven days a week. Between 1992 and 2011, six other stations joined the network. In 1995 NHPR launched The Exchange, hosted by former NPR reporter Laura Knoy.

Until 2000, NHPR broadcast a mix of NPR news and classical music. However, in 2000 it switched its weekday schedule to all news and talk.

In spring 2007 NHPR had a weekly audience of 161,100 listeners and about 16,000 contributing members. It had an annual budget of $4.5 million, with contributions from listeners, local businesses, grants and funding from the Corporation for Public Broadcasting. Contributions from listeners and businesses in New Hampshire make up more than 90 percent of NHPR's revenue. NHPR does not receive funding from the state of New Hampshire.

In 2014, NHPR bought WCNH, a classical music station. Since WCNH operates at only 190 watts, it is simulcast on WEVO's second HD channel.

NHPR broadcasts the major daily news programs produced by NPR, including Morning Edition and All Things Considered . The statewide network also broadcasts programming from American Public Media, including Live from Here and Marketplace , as well as programs from Public Radio International, including Studio 360 , The Takeaway , This American Life . NHPR also airs programming from international broadcasters, such as As It Happens , the BBC World Service from Britain.

Writers on a New England Stage

NHPR, in conjunction with the Portsmouth Music Hall, has produced a series on New England writers and authors. So far the series has had such authors as John Updike ( Terrorist ), Doris Kearns Goodwin, Dan Brown ( The Da Vinci Code ), Alan Alda, and Mitch Albom. Virginia Prescott of Word of Mouth is the interviewer, and the trio Dreadnaught is the house band. The River Run Bookstore in Portsmouth is also affiliated.

WBZ is a Class A clear channel radio station licensed to Boston, Massachusetts. Originally started by, and formerly owned for most of its existence by, Westinghouse Broadcasting and its successor CBS Radio, WBZ is owned and operated by iHeartMedia.

WBUR-FM is a public radio station located in Boston, Massachusetts, owned by Boston University. It is the largest of three NPR member stations in Boston, along with WGBH and WUMB-FM and produces several nationally distributed programs, including On Point, Here and Now and Open Source. WBUR previously produced Car Talk, Only a Game, and The Connection. RadioBoston, launched in 2007, is its only purely local show. WBUR's positioning statement is "Boston's NPR News Station".

WXKS – branded Talk 1200 – is a commercial news/talk radio station licensed to Newton, Massachusetts, serving the Greater Boston area. Owned by iHeartMedia, WXKS serves as the Boston affiliate for Fox News Radio, The Glenn Beck Program, The Clay Travis and Buck Sexton Show, The Sean Hannity Show and The Mark Levin Show; and the home of syndicated personalities Bill Handel, Ron Wilson, Gary Sullivan and Leo Laporte. The WXKS studios are located in the Boston suburb of Medford, while the station transmitter resides in Newton. Besides its main analog transmission, WXKS streams online via iHeartRadio.

WUMB-FM in Boston, Massachusetts, is the radio station of the University of Massachusetts Boston. It broadcasts an Americana/Blues/Roots/Folk mix hosted by its staff weekdays. On weekends the station concentrates on traditional folk, Celtic, blues, and world music including syndicated programs. Overnight programming starting at midnight and usually through 5am is a repeat of a portion of the previous day's programming; an announcement of this fact is made at midnight. The station has received many awards for its folk music programming.

WSNE-FM is a commercial radio station, licensed to Taunton, Massachusetts, and serving Southeastern Massachusetts and the Providence, Rhode Island area. It broadcasts a hot adult contemporary radio format branded as Now 93.3, and is owned by iHeartMedia, Inc. The radio studios and offices are on Oxford Street in Providence. The station carries the syndicated On Air with Ryan Seacrest in afternoons. Several of the other shifts are voicetracked by DJs working at other iHeart stations.

Vermont Public Radio (VPR) is a network of public radio stations covering the state of Vermont and operated by Vermont Public Co., which also operates Vermont PBS. The network is a mix of programming from NPR, Public Radio International, American Public Media with some locally produced programs. VPR also broadcasts classical music on a different set of stations and has some online-only programming, including a 24-hour jazz music service. VPR is headquartered in Colchester, a suburb of Burlington. Other studio facilities are located in Montpelier, Manchester, Norwich and Brattleboro.

WXTK is a commercial FM radio station licensed to West Yarmouth, Massachusetts, and serving Cape Cod. It has a talk radio format and is owned by iHeartMedia, Inc. The studios and offices are on Barnstable Road in Hyannis, while the transmitter is on Radio Lane in Yarmouth. WXTK is the direct descendant of Cape Cod's first commercial radio station, WOCB.

WBFB is a commercial FM radio station in Bangor, Maine. The station is owned by Blueberry Broadcasting and airs a country music radio format, simulcast on sister stations WBFE in Bar Harbor and WMCM in Rockland.

WGIR is a commercial AM radio station in Manchester, New Hampshire with a news/talk radio format. The station is owned by iHeartMedia, Inc. WGIR's studios and offices are on Foundry Street in Manchester. Much of the programming and news, but not the commercials, can be heard on co-owned WQSO 96.7 MHz in Rochester, serving the New Hampshire Seacoast.

WPKX is a commercial AM radio station licensed to Rochester, New Hampshire that broadcasts a sports radio format, largely supplied from Fox Sports Radio. The station is owned by iHeartMedia, Inc. and serves the Portsmouth-Dover-Rochester media market, also heard in Southern Maine. WPKX broadcasts at 5000 watts around the clock from a transmitter off Route 108 in Rochester. To protect other stations on 930 kHz, WPKX uses a directional antenna at night.

WEVC is a radio station licensed to Gorham, New Hampshire. The station is owned by New Hampshire Public Radio, and is an affiliate of their public radio network. 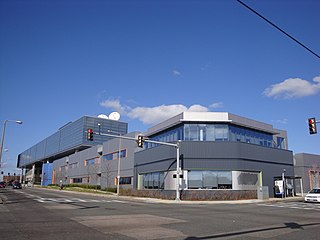 WTPL is a radio station broadcasting a news/talk/sports format. Licensed to Hillsborough, New Hampshire, United States, it serves the Manchester and Concord areas. The station is owned by Bill Binnie's Binnie Media, through licensee WBIN Media Co., Inc. It airs a news/talk radio format. It the flagship station of a trimulcast with WTSN in the Portsmouth market and WEMJ in the Lakes Region.

WSMN is a commercial AM radio station broadcasting a Talk Radio format. It is licensed to Nashua, New Hampshire, and serves the Merrimack Valley. Its owners since March 2017 are on-air personalities George Russell and Bob Bartis. WSMN has some local talk shows and also features paid brokered programming.

WNNW is a commercial radio station licensed to Lawrence, Massachusetts, United States. Established in 1947 as WCCM, the station is owned by Costa-Eagle Radio Ventures, LP, a partnership between Pat Costa and the Lawrence Eagle-Tribune newspaper. WNNW airs a Spanish-language tropical music format.

WCNH was an FM radio station licensed to Bow, New Hampshire, broadcasting on 91.5 MHz. The station served the Concord, New Hampshire area, and was owned by New Hampshire Public Radio, Incorporated. It served as the second home for the "Classical New Hampshire" classical music service, operating from 2011 to 2021.

WKMY is a radio station broadcasting a contemporary Christian music format. Licensed to Athol, Massachusetts, United States, it serves the North County and Pioneer Valley areas. The signal for WKMY can be heard in north central Massachusetts, southern New Hampshire, and southern Vermont. It first began broadcasting in 1989 under the call sign WCAT-FM. The station is owned by the Educational Media Foundation.