Rye is a town in Rockingham County, New Hampshire, United States. The population was 5,298 at the 2010 census. [1] The town is home to several state parks along the Atlantic coastline.

The first settlement in New Hampshire, originally named Pannaway Plantation, was established in 1623 at Odiorne's Point [2] by a group of fishermen led by David Thompson. The settlement was abandoned in favor of Strawbery Banke which became Portsmouth. The first settler in present-day Rye was probably William Berry. [3] Prior to its incorporation in 1726 as a parish of New Castle, Rye was called "Sandy Beach" and its lands were once parts of New Castle, Portsmouth, Greenland and Hampton. [4] In 1726, the town of New Castle set off a Parish for Sandy Beach called "Rye", for Rye in Sussex, England, the ancestral lands of the Jenness family who continue to live in the town to this day and even have a beach named after them. The town was actually incorporated in 1785 from New Castle though the town seal mistakenly has it set as 1726. [5] Later on in the year, the seal was updated to include the three dates important to Rye, 1623, 1726 and 1785.

Route 1A, going north-south, follows the coast. Short segments of U.S. Route 1 and Route 1B enter Rye. The nearest major highway is I-95, with the closest two exits in Hampton and Portsmouth. The nearest commercial airport is Portsmouth International Airport; the two closest major airports are Logan Airport in Boston and Portland International Jetport.

The unincorporated community of Rye Beach is in the southern part of the town. Rye Beach has its own U.S. post office, as well as its own zoning enforcement and planning regulations. [7]

In August 2001, a group of townspeople from Newington and Rye made a plea in protest to the state legislature to consider allowing the town to secede from the state due to disproportionate property tax laws which had been passed by the state in 1997 to balance the state's education economy. [13] The dispute was largely quelled by the lack of support for the movement, as only 52 of Newington's 700+ (and 100 of Rye's 5,000) residents signed the petition. The property tax issue itself quieted as Governor Craig Benson announced in 2003 the property taxes would be cut almost by half by 2008.

Children who live in Rye can attend public schools in town from kindergarten through eighth grade. School Administrative Unit 50 (SAU-50) is the school district that serves Rye, as well as the towns of Greenland, Newington, and New Castle. High school students from Rye attend Portsmouth High School.

Rye Elementary School is home to kindergarten through fifth grade and is the first and largest school students from Rye will attend in SAU-50. All grades are co-ed and the school has an 11 to 1 student per teacher ratio with three hundred and thirty students enrolled in October 2013. Rye Junior High handles grades six, seven, and eight. The neighboring town of New Castle sends its students to Rye Junior High after sixth grade, but only contributes a few students to each year's seventh grade class. All grades are coed and contain two hundred and twenty students as of October 2013 with a ratio of nine students to each teacher.

There are two private pre-schools in the town. Rye Country Day is the larger of the two pre-schools in town, currently enrolling one hundred and forty students (as of October 2013). The second, The Children's House Montessori school, is located at 80 Sagamore Road and has a student per teacher ratio of eleven to one.

Learning Skills Academy is a private non-profit school catering to students with learning capabilities. The organization has a location at 1237 Washington Road in Rye and accepts students in fifth through eleventh grade, as well as third. 32 kids make up the student body at the Rye location as of October 2013. 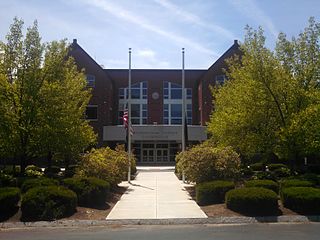 Rockingham County is a county in the U.S. state of New Hampshire. As of the 2010 census, the population was 295,223, making it the second-most populous county in New Hampshire. The county seat is Brentwood. Rockingham County constitutes a portion of the Boston-Cambridge-Newton, MA-NH Metropolitan Statistical Area as well as of the greater Boston-Worcester-Providence, MA-RI-NH-CT Combined Statistical Area.

Portsmouth is a city in Rockingham County, New Hampshire, United States. As of the 2010 census it had a population of 21,233, and in 2018 the estimated population was 21,896. A historic seaport and popular summer tourist destination on the Piscataqua River bordering the state of Maine, Portsmouth was formerly the home of the Strategic Air Command's Pease Air Force Base, since converted to Portsmouth International Airport at Pease.

Greenland is a town in Rockingham County, New Hampshire, United States. The population was 3,549 at the 2010 census. It is drained by the Winnicut River and bounded on the northwest by Great Bay. 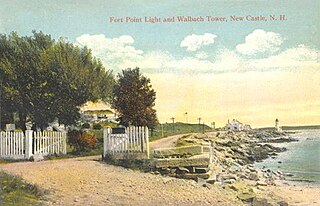 New Castle is a town in Rockingham County, New Hampshire, United States. The population was 968 at the 2010 census. It is the smallest and easternmost town in New Hampshire, and the only one located entirely on islands. It is home to Fort Constitution Historic Site, Fort Stark Historic Site, and the New Castle Common, a 31-acre (13 ha) recreation area on the Atlantic Ocean. New Castle is also home to a United States Coast Guard station, as well as the historic Wentworth by the Sea hotel.

Newington is a town in Rockingham County, New Hampshire, United States. The population was 753 at the 2010 census. It is bounded to the west by Great Bay, northwest by Little Bay and northeast by the Piscataqua River. It is home to Portsmouth International Airport at Pease, and to the New Hampshire National Guard. The 110-acre (45 ha) Old Town Center Historic District is listed on the National Register of Historic Places.

North Hampton is a town in Rockingham County, New Hampshire, United States. The population was 4,301 at the 2010 census. While the majority of the town is inland, North Hampton includes a part of New Hampshire's limited Atlantic seacoast. 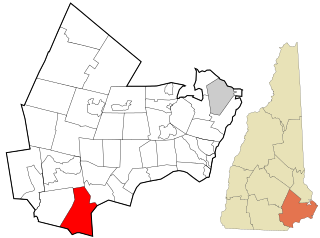 Salem is a town in Rockingham County, New Hampshire, United States. The population was 28,776 at the 2010 census. Being located on Interstate 93 as the first town in New Hampshire, which lacks any state sales tax, Salem has grown into a commercial hub, anchored by the Mall at Rockingham Park. Other major sites include the Canobie Lake Park, a large amusement park, and America's Stonehenge, a stone structure of disputed origins. It is the former home of Rockingham Park, a horse racetrack. The Sununu political family hails from Salem, including former New Hampshire governor and White House Chief of Staff John H. Sununu, and his sons John E. Sununu, a former U.S. senator, and Chris Sununu, current New Hampshire governor. 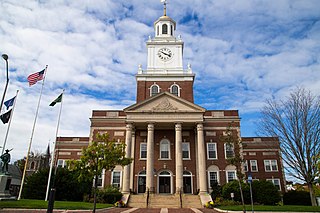 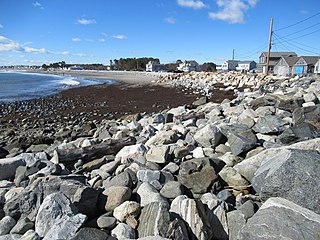 The Seacoast Region is the southeast area of the U.S. state of New Hampshire that includes the eastern portion of Rockingham County and the southern portion of Strafford County. The region stretches 13 miles (21 km) along the Atlantic Ocean from New Hampshire's border with Salisbury, Massachusetts, to the Piscataqua River and New Hampshire's border with Kittery, Maine. The shoreline alternates between rocky and rough headlands and areas with sandy beaches. Some of the beaches are bordered by jetties or groins, particularly in the towns of Rye and Hampton. The Seacoast Region includes some inland towns as well, as far west as Epping and as far north as Rochester. 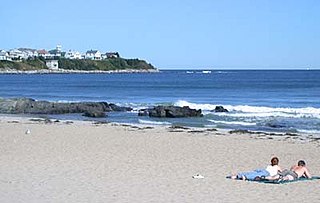 Hampton Beach is a village district, census-designated place, and beach resort in the town of Hampton, New Hampshire, United States, along the Atlantic Ocean. Its population at the 2010 census was 2,275. Hampton Beach is in Rockingham County, about 15 miles (24 km) south of Portsmouth. The community is a popular tourist destination and the busiest beach community in New Hampshire. Ocean Boulevard, the main street along the beach, includes a boardwalk, many shops and businesses, several seasonal hotels, and the Hampton Beach Casino Ballroom, which hosts national acts in the summer. Hampton Beach State Park was named one of four "Superstar" beaches in the United States in 2011, for having had perfect water-quality testing results in each of the previous three years.

New Hampshire Route 1A is an 18.32-mile (29.48 km) long state highway located in southeast New Hampshire. The route runs along the Atlantic coastline from the Massachusetts border north to Rye, then turns toward downtown Portsmouth. The southern terminus is at the Massachusetts state line in Seabrook where it continues south as Massachusetts Route 1A. The northern terminus is at a junction with U.S. Route 1 in downtown Portsmouth. For the length of the road's run along the shore, its local name is Ocean Boulevard. In Portsmouth, it is known as Miller Avenue and Sagamore Avenue.

Interstate 95 (I-95), the main Interstate Highway on the east coast of the United States, cuts through the Seacoast Region of New Hampshire. The majority of it, from the Massachusetts border to the Portsmouth Circle in Portsmouth, is the 14.29-mile-long (23.00 km) Blue Star Turnpike or New Hampshire Turnpike, a toll road maintained by the New Hampshire Department of Transportation (NHDOT) Bureau of Turnpikes. The final piece in Portsmouth splits from the turnpike south of the circle, running 2.42 miles (3.89 km) to the Piscataqua River Bridge, a steel arch bridge, towards Maine and the Maine Turnpike. In its short length through New Hampshire, Interstate 95 traverses six municipalities - Seabrook, Hampton Falls, Hampton, North Hampton, Greenland, and Portsmouth.

This article shows U.S. Census totals for Rockingham County, New Hampshire, broken down by municipality, from 1900 to 2000.

In the U.S. state of New Hampshire, U.S. Route 1 is a north–south state highway through Hampton and Portsmouth. It lies between Interstate 95 and New Hampshire Route 1A.

Rye Beach is an unincorporated community along the Atlantic Ocean in Rye, New Hampshire, United States. It is located along New Hampshire Route 1A near the southern border of the town of Rye, directly south of Jenness State Beach and north of Little Boar's Head. Rye Beach has a separate ZIP code (03871) from the rest of the town of Rye. 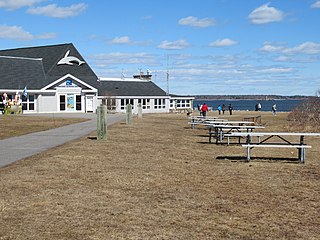 Odiorne Point State Park is a New Hampshire state park located on the seacoast in Rye near Portsmouth. The point got its name from the Odiorne family, who settled on the land in the mid-1660s. Among the park's features are the Seacoast Science Center and the remains of the World War II Fort Dearborn.