A pennant is a commemorative flag typically used to show support for a particular athletic team. Pennants have been historically used in all types of athletic levels: high school, collegiate, professional etc. Traditionally, pennants were made of felt and fashioned in the official colors of a particular team.[ citation needed ] Often graphics, usually the mascot symbol, as well as the team name were displayed on pennants. The images displayed on pennants were either stitched on with contrasting colored felt or had screen-printing. Today, vintage pennants with rare images or honoring special victories have become prized collectibles for sporting enthusiasts. While pennants are typically associated with athletic teams, pennants have also been made to honor institutions and vacation spots, often acting as souvenirs.

In Major League Baseball, a pennant typically refers to such a flag flown specifically by the National League or American League championship team of a given season, or to such a championship itself. The last few weeks of the regular American professional baseball season are known as a pennant race. This is a holdover from the time (pre-1969) when the league championships were determined by the team with the best record at the end of the regular season. The pennant winners earn the right to play in MLB's title round, the World Series. Since 1969 the pennants are determined by the National and American League Championship Series playoffs, analogous to the NBA and NHL Conference Finals series and the NFL's NFC/AFC Championship Games.

In Australian sports, the term flag is used in the same context. The pennant is waved around in the crowd to show support to the sport team they are cheering for. 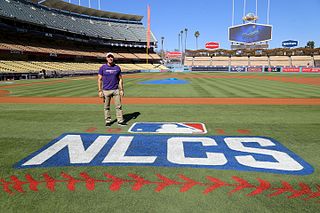 The Los Angeles Dodgers are an American professional baseball team based in Los Angeles, California. The Dodgers compete in Major League Baseball (MLB) as a member club of the National League (NL) West division. Established in 1883 in the New York City borough of Brooklyn, the team relocated to Los Angeles before the 1958 season. They played four seasons at the Los Angeles Memorial Coliseum before moving to Dodger Stadium, their current home, in 1962.

The Oakland Athletics, often referred to as the A's, are an American professional baseball team based in Oakland, California. They compete in Major League Baseball (MLB) as a member club of the American League (AL) West division. The team plays its home games at the Oakland Coliseum. They have won nine World Series championships.

William Julius "Judy" Johnson was an American professional third baseman and manager whose career in Negro league baseball spanned 17 seasons, from 1921 to 1937. Slight of build, Johnson never developed as a power threat but achieved his greatest success as a contact hitter and an intuitive defenseman. Johnson is regarded as one of the greatest third basemen of the Negro leagues. In 1975, he was elected into the Baseball Hall of Fame after being nominated by the Negro Leagues Committee.

The Nashville Vols were a Minor League Baseball team that played in Nashville, Tennessee, from 1901 to 1963. Known only as the Nashville Baseball Club during their first seven seasons, they were officially named the Nashville Volunteers in 1908 for the state's nickname, The Volunteer State. The Vols played their home games at Sulphur Dell, which was known as Athletic Park until 1908.

The Hilldale Athletic Club were an American professional Negro league baseball team based in Darby, Pennsylvania, west of Philadelphia.

The Minnesota Twins are an American professional baseball team based in Minneapolis, Minnesota. The Twins compete in Major League Baseball (MLB) as a member club of the American League (AL) Central division. The team is named after the Twin Cities area of Minneapolis and St. Paul, Minnesota. The club was originally founded in 1901 as the Washington Senators, and was one of the American League's eight original charter franchises. By 1903, peace was restored with agreements between the two rival baseball loops on player contract and represented member cities/teams, and the beginnings of a national championship series entitled the World Series. In 1905, the team changed its official name to the Washington Nationals. The name "Nationals" would appear on the uniforms for only 2 seasons, and would then be replaced with the "W" logo for the next 52 years. The media often shortened the nickname to "Nats". Many fans and newspapers persisted in continuing using the previous "Senators" nickname. Over time, "Nationals" faded as a nickname, and "Senators" became dominant. Baseball guides would list the club's nickname as "Nationals or Senators", acknowledging the dual-nickname situation. After 61 years in the capital, in 1961, the Senators relocated to the upper Midwest to Minnesota and were renamed as the Twins, being the first major league baseball team to use a state in its name rather than the traditional city. 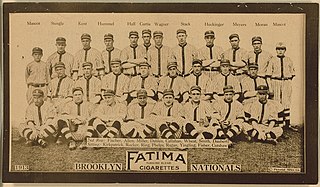 The Brooklyn Dodgers were a Major League baseball team, active primarily in the National League from 1884 until 1957, after which the club moved to Los Angeles, California, where it continues its history as the Los Angeles Dodgers. The team moved west at the same time as its longtime rivals, the New York Giants, also in the National League, relocated to San Francisco in northern California as the San Francisco Giants. The team's name derived from the reputed skill of Brooklyn residents at evading the city's trolley streetcar network. The Dodgers played in two stadiums in South Brooklyn, each named Washington Park, and at Eastern Park in the neighborhood of Brownsville before moving to Ebbets Field in the neighborhood of Flatbush in 1913. The team is noted for signing Jackie Robinson in 1947 as the first black player in the modern major leagues. 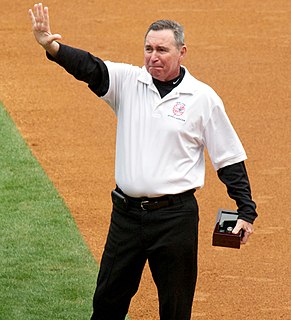 Gene Monahan is the former head athletic trainer for the New York Yankees of Major League Baseball. He spent 38 years with the Yankees organization and from 1973 until 2011 and was part of their training staff. During his tenure Monahan cared for the players on seven World Championship teams, 11 Pennant winning teams and 19 post-season teams.