Last updated February 20, 2021
This article is about the type of song used in sports. For the 2007 Eurovision Song Contest entry, see Fight (song). For other uses, see Fight Song (disambiguation).
Not to be confused with school songs, a song used to represent a school or university.

In U.S. and Canadian sports, a fight song is a song associated with a team. In both professional and amateur sports, fight songs are a popular way for fans to cheer for their team, and are also laden with history; in singing a fight song, fans feel part of a large, time-honored tradition. [1] Although the term "fight song" is primarily used in the United States, the use of fight songs is commonplace around the world, but they may also be referred to as team anthems, team songs or games songs in other countries, even such as Australia, Mexico and New Zealand. Fight songs differ from stadium anthems, used for similar purposes, in that they are usually written specifically for the purposes of the team, whereas stadium anthems are not.

Hundreds of colleges have fight songs, some of which are over a century old. The oldest collegiate fight song in the United States is Boston College's "For Boston", composed by T.J. Hurley in 1885. [2]

One of the oldest games songs in Australia is Melbourne Grammar's 'Play Together, Dark Blue Twenty', which is sung to the tune of 'The March of the Men of Harlech'. [3] [4] It was composed by Ambrose John Wilson who was principal of the school from 1885-1893. [5] This is not to be confused with the school hymn 'Ora et Labora' which is now sung to the tune of 'Jerusalem'. [6]

"Mighty Bruins" is a fight song of University of California, Los Angeles sports teams. Composed by Academy Award-winning composer Bill Conti, the song was commissioned by the UCLA Alumni Association on its fiftieth anniversary. It debuted in 1984 at the football game against Stanford University, with the school marching band conducted by Conti himself.

The Georgia Redcoat Marching Band, commonly referred to as "The Redcoats", is the official marching band of the University of Georgia. 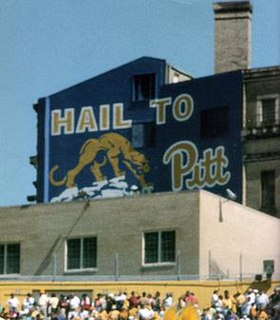 "Hail to Pitt" is the most traditional fight song of the University of Pittsburgh, which is commonly referred to as Pitt. The saying "Hail to Pitt!" is also the most traditional and commonly used slogan of the University of Pittsburgh and its athletics teams. The slogan is frequently used in promotional material, printed on merchandise and souvenirs. It was also the title of a 1982 history of Pitt athletics by author Jim O'Brien. The slogan is often used among alumni as a statement of affiliation, including as a closing signature in conversation or correspondence between alumni, and is sometime abbreviated as "HTP" or "H2P", the latter of which is a registered trademark of the university and is frequently used on official university signage and merchandise.

"Cheer for the Blue and White" is a fight song of Indiana State University. The words and music were written by Malcolm Scott, who also arranged "Dear Old Rose," the school song for Rose Poly. Scott was a graduate of Indiana State Teachers College earning a degree in music.

The 2001 NCAA Division I Softball Tournament was the twentieth annual tournament to determine the national champion of NCAA women's collegiate softball. Held during May 2001, forty-eight Division I college softball teams contested the championship. The tournament featured eight regionals of six teams, each in a double elimination format. The 2001 Women's College World Series was held in Oklahoma City, Oklahoma from May 24 through May 28 and marked the conclusion of the 2001 NCAA Division I softball season. Arizona won their sixth NCAA championship by defeating UCLA 1–0 in the final game. Arizona pitcher Jennie Finch was named Women's College World Series Most Outstanding Player.