The Orange and Blue

Last updated November 28, 2021
Fight song at the University of Florida

"The Orange and Blue" is the traditional fight song of the Florida Gators intercollegiate sports teams of the University of Florida in Gainesville, Florida. [1]

History of the lyrics and score

The author of the lyrics and original music of "The Orange and Blue" is uncertain, but published examples of the University of Florida's songs and yells which include the lyrics date to at least the 1916–17 school year. [2] Sheet music for the song was published in 1925 which listed George Hamilton as the author. Thornton W. Allen, a prolific compiler, composer and arranger of American university alma maters and college football fight songs, arranged a version of the musical score in 1935, with "Words by George Hamilton." The present music for the song, as played at University of Florida events, was arranged by the university's former director of bands, Richard W. Bowles, in 1964. [3] Bowles served as the assistant university band director from 1958 to 1961, the director from 1961 to 1975, and continued to teach at the university until his retirement in 1985. [3]

While "The Orange and Blue" is often played during football and basketball games and other Florida Gators athletic contests to rally fans and show support for the university's athletic teams, The Pride of the Sunshine marching band and the university's other pep bands rarely play any part of the song other than the chorus.

So give a cheer for the Orange and Blue Waving Forever! Forever pride of Old Florida, May she droop never. We’ll sing a song for the flag today, Cheer for the team at play! On to the goal, We’ll fight our way for Flor-i-da! Go Gators! [4] 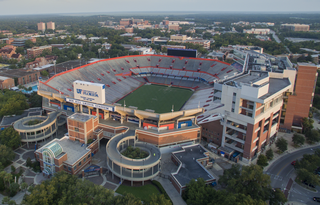 Ben Hill Griffin Stadium, popularly known as "The Swamp", is a football stadium on the campus of the University of Florida in Gainesville and the home field of the Florida Gators football team. It was originally known as Florida Field when it opened as a 22,000 seat facility in 1930, and it has been expanded and renovated many times over the ensuing decades. Most of the university's athletic administrative offices, along with most football-related offices and training areas, have been located in the stadium since the 1960s. Most of the football program's facilities are slated to move to a nearby $60 million building that began construction in 2020.

The Florida–Miami football rivalry is an American college football rivalry between the Florida Gators football team of the University of Florida and Miami Hurricanes football team of the University of Miami. The game was played annually from 1944 until 1987, and is now played intermittently. The winning team was formerly awarded the Seminole War Canoe Trophy. Today, the round robin winner of the three biggest schools in the state of Florida receives the Florida Cup for beating the other two schools in the same season. Florida won the most recent game in 2019, 24–20. The two teams will have a home and home series in 2024 and 2025. Miami leads the series 29–27.

Gator Growl, produced by Florida Blue Key with artists funded by Student Government Productions, is a student-run pep rally at the University of Florida that was founded in 1924. It marks the culmination of Homecoming Week at the university.

The University of Florida Fightin' Gator Marching Band, also known as The Pride of the Sunshine, is the official marching band for the University of Florida. The current era of the band is also referred to as The Sound of the Gator Nation. They perform at every Florida Gators home football game at Ben Hill Griffin Stadium and also at various other events such as pep rallies, parades, and the annual Orange and Blue spring scrimmage game. A full band usually travels to one away game a year while at other games a small/medium-sized pep band will attend. Members of the Gator Band, as well as other University of Florida students, are encouraged to join other ensembles such as concert band, jazz band, basketball band, and volleyball band. The majorettes (twirlers) for the marching band are called the Gatorettes who perform acrobatics, cartwheels, flips, and sometimes twirl multiple batons at one time. The color guard is called the Florida Visual Ensemble.

The Florida–Florida State football rivalry, occasionally called the Sunshine Showdown, is an American college football rivalry between the teams of the two oldest public universities of the U.S. state of Florida: the University of Florida Gators and Florida State University Seminoles. Both universities participate in a range of intercollegiate sports, and for the last several years, the Florida Department of Agriculture and Consumer Services has sponsored a "Sunshine Showdown" promotion that tallies the total number of wins for each school in head to head sports competition. However, the annual football game between the Gators and Seminoles has consistently been the most intense and notable competition between the in-state rivals. 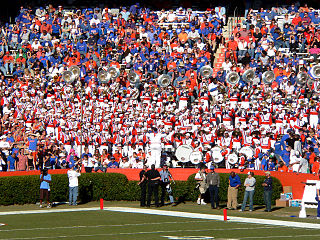 "We Are the Boys from Old Florida" is a song commonly played and sung during University of Florida (UF) sporting events, most notably at the end of the third quarter at football games by The Pride of the Sunshine, the school's marching band. It is very similar to other school songs sung by several other colleges and schools around the United States, and its origin and original composer is unknown. At Florida, it has been popular since the 1920s.

The Florida–Tennessee football rivalry, sometimes referred to as the "Third Saturday in September", is an American college football rivalry between the Florida Gators football team of the University of Florida and Tennessee Volunteers football team of the University of Tennessee, who first met on the football field in 1916. The Gators and Vols have competed in the same athletic conference since Florida joined the now-defunct Southern Intercollegiate Athletic Association in 1910, and the schools were founding members of the Southeastern Conference in 1932. Despite this long conference association, a true rivalry did not develop until the early 1990s due to the infrequency of earlier meetings; in the first seventy-six years (1916–91) of the series, the two teams met just twenty-one times. The Southeastern Conference (SEC) expanded to twelve universities and split into two divisions in 1992. Florida and Tennessee were placed in the SEC's East Division and have met on a home-and-home basis every season since. Their rivalry quickly blossomed in intensity and importance in the 1990s and early 2000s as both programs regularly fielded national championship contending teams under coaches Phil Fulmer of Tennessee and Steve Spurrier at Florida.

Lawrence D. Wright, III is an American former college and professional football player who was a safety in the National Football League (NFL) for two seasons during the 1990s. Wright played college football for the University of Florida, where he was a member of a national championship team. Thereafter, he played professionally for the Cincinnati Bengals of the NFL. 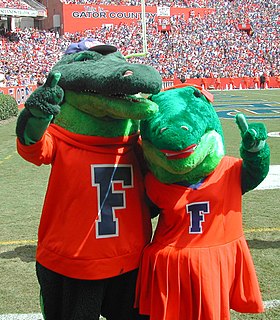 Albert Einstein Gator and Alberta Gator are the official mascots of the University of Florida in Gainesville, Florida. Costumed in plush, Albert and Alberta are Florida representations of American alligators, which are commonly found throughout the state of Florida. He was named after Albert Einstein.

The Thunder of the East is the marching band of the University at Buffalo in the State University of New York system. UB's first marching band was created in 1920, and disbanded in 1927. It was revived in 1946, increasing in size and reputation until about 1970. It was known as "The Pride of the East." At that time, it was dissolved upon UB's departure from Division I athletics. In 1981, some UB students continued the tradition of playing music at UB's home football and basketball games by forming UB's Pep Band. In anticipation of UB's return to Division I athletics, a marching band was formed in 1999 and named, "Thunder of the East." The band debuted at the University at Buffalo Stadium on September 11, 1999. The Thunder of the East is currently led by James E. Mauck; and performs at UB's Buffalo Bulls home football games, as well as in other musical venues.

Keith R. Tribble has been president and chief executive officer (CEO) of Jackson Health Foundation (JHF) since 2014. JHF is the fundraising arm for Jackson Health System (JHS). The Foundation seeks private philanthropic funds to improve JHS facilities, provide equipment and technology, and support its priority projects. The Foundation's fundraising efforts allow JHS to provide medical care to patients, regardless of financial need, and improve health care delivery, enhance the "hospital experience" for patients, and promote wellness and preventive medicine. Since joining JHF, Tribble and his team have secured over $40m in charitable contributions.

George E. Edmondson Jr. was an insurance salesman from Tampa, Florida who was known to the University of Florida community as "Mr. Two Bits". Edmondson was a long-time fan of — and unofficial cheerleader for — the Florida Gators football team, for which he led a traditional "Two Bits' cheer" at football games from 1949 until his retirement from the role at the conclusion of the Gators' 2008 season.

The Pride of the South is the name of the marching band at The University of Mississippi in Oxford, Mississippi. The full band plays at all Ole Miss home football games, and a smaller pep band is sent to most away games. The full band also travels to Ole Miss bowl games and Starkville, Mississippi when Mississippi State University hosts the Egg Bowl. The University of Mississippi Band has been giving outstanding performances in concert and in support of Ole Miss athletic events since it was organized in 1924. In addition to performing at all home football games and many away games, the marching band has attended numerous bowl games including the Sugar Bowl, the Gator Bowl, the Liberty Bowl, the Independence Bowl, the Peach Bowl, the Cotton Bowl, and more recently the Motor City Bowl in 1997, the Music City Bowl in 2000, the Independence Bowl in 1998, 1999 and 2002, the Cotton Bowl in 2004, 2009 and 2010, the Chick-fil-a Classic in 2014, the Peach Bowl in 2014, and the Sugar Bowl in 2016.

The 2010 Florida Gators football team represented the University of Florida in the sport of American football during the 2010 college football season. The Gators competed in the Football Bowl Subdivision (FBS) of the National Collegiate Athletic Association (NCAA) and the Eastern Division of the Southeastern Conference (SEC), and played their home games at Ben Hill Griffin Stadium on the university's Gainesville, Florida campus. The season was the sixth and final campaign for coach Urban Meyer, who led the Gators to a 37–24 Outback Bowl victory over coach Joe Paterno's Penn State Nittany Lions, and an overall win-loss record of 8–5 (.615).

The University of North Carolina at Charlotte Pride of Niner Nation Marching Band, also known as The Pride of Niner Nation, and PNNMB is the official marching band for the University of North Carolina at Charlotte. They perform at every Charlotte 49ers home football game at Jerry Richardson Stadium and also at various other events such as away football games, pep rallies, parades, and special observances. A partial band usually travels to at least one away game a year. The band includes the Colorguard and Batton Twirler. Members of the PNNMB also participate in Wind Ensemble, the Symphonic Band, and the 49ers Basketball Band.