Shepherd University began when the county seat of Jefferson County, West Virginia, was moved from its temporary location in Shepherdstown back to Charles Town in July 1871. The people of Shepherdstown and vicinity decided to use the vacated courthouse for educational purposes. An article of incorporation for a school to be known as Shepherd College, designed to instruct students “in languages, arts and sciences,” was drawn up and signed by C. W. Andrews, Alexander R. Boteler, C. T. Butler, G. M. Beltzhoover, David Billmyer, Samuel Knott, and Henry Shepherd. This body of incorporators gave itself power to elect instructors, pay salaries, and prescribe courses of study. Professor Joseph McMurran was appointed first principal of the institution, which opened with 42 students in September 1871, under the authority of the Board of Trustees.

On February 27, 1872, the Legislature of West Virginia passed the following act: “That a branch of the State Normal School be and the same is hereby established at the building known as Shepherd College, in Shepherdstown, in the county of Jefferson.”

Shepherd became a four-year college for the training of teachers on July 1, 1930, at which time the institution began granting the bachelor of arts degree. Shepherd was authorized to implement liberal arts programs in 1943, and in 1950 the bachelor of science degree was added. Also in 1950 Shepherd was accredited by the North Central Association of Colleges and Schools and in 1951 it became a member of the Association of American Colleges. On April 7, 2004, Governor Bob Wise signed legislation allowing Shepherd College to change its name to Shepherd University.

Potomac Place, a new 298 bed dormitory on the West Campus, opened in August 2017.

Mary J. C. Hendrix was inaugurated as the sixteenth president of Shepherd University on April 8, 2016. [3]

The Ruth Scarborough Library collection contains varied materials, numbering 511,518 items. Printed and microtext materials compose the majority of the collection, including 164,206 printed books and bound periodicals as well as 200,474 in microfiche and microfilm. Other items in the collection include phonograph records, cassette tapes, DVDs, CDs, and video cassettes. The library currently subscribes to 521 periodicals and newspapers in paper, and it provides access to more than 12,000 periodicals in full-text. In addition, the library provides access to electronic databases and online indexing and abstracting services.

The Scarborough Library, originally built in 1965, was renovated in 2002–03. The library is a place of study and research for individuals and groups. The 46,000-square-foot (4,300 m2) expansion, dedicated in 2002, includes multimedia classrooms, additional reading areas and seating, and the Robert C. Byrd Center for Congressional History and Education whose purpose is to promote an understanding of the United States Congress and the Constitution through public programing, teacher training. The Byrd Center houses an archive containing the political papers of West Virginia's Senator Robert C. Byrd, Congressman Harley O. Staggers, Sr., and Congressman Harley O. Staggers, Jr., along with other related collections.

The Contemporary American Theater Festival is an annual festival of new plays by American playwrights, most often premieres or second or third productions. CATF focuses on plays that deal with contemporary issues that boldly challenge and entertain audiences. [4]

Since 1991, CATF has produced 127 plays written by 90 playwrights, including 52 world premieres, 11 of which were commissioned. Adventurous audiences from 38 states, the District of Columbia, Canada, and Europe have attended the Theater Festival's productions. The plays are professionally produced using Actors' Equity Association's LORT D contract; CATF operates under agreements from AEA, United Scenic Artists, and the Society of Stage Directors and Choreographers.

George Tyler Moore Center for the Study of the Civil War

The George Tyler Moore Center for the Study of the Civil War is home to Shepherd University's academic concentrations related to the Civil War and 19th Century America. The program requires students to complete specialized courses in addition to the courses already required of all history majors. Courses concentrate on various elements of 19th century history such as The American Civil War, 1850–1865; the Reconstruction Era; African American History; Soldiers and Society, 1861–65; and the Old South. Students also conduct primary research within the topic area and must intern at one of various historic sites in the region, such as Harpers Ferry National Historic Site. [5]

The ongoing research mission at the George Tyler Moore Center for the Study of the Civil War involves the compilation of figures from the soldiers' compiled military service records which will lead to a more definitive number of veterans. Within the next five years, data gleaned from the service records of soldiers serving in all of West Virginia's Union regiments and (Western) Virginia Confederate regiments will be compiled in the center's electronic database. Once completed a simple query will be able to provide a very accurate total for both sides including data heretofore unavailable to historians.[ citation needed ]

In 2015, Shepherd advanced to the NCAA Division II football national championship game, losing to Northwest Missouri State University, 34–7. In 2016, the Rams lost in the Final Four to North Alabama, 23–13.

Shepherdstown is a town in Jefferson County, West Virginia, in the United States, located in the lower Shenandoah Valley along the Potomac River. Home to Shepherd University, the town's population was 1,734 at the 2010 census.

Alderson Broaddus University ("AB") is a private university in Philippi, West Virginia. It was formed in 1932 as Alderson–Broaddus College by the union of two Baptist institutions: Alderson Academy and Broaddus Institute. The school adopted its current name in 2013. 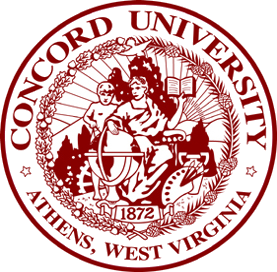 Concord University is a public university in Athens, West Virginia. It was founded on February 28, 1872, when the West Virginia Legislature passed "an Act to locate a Branch State Normal School, in the town of Concord Church, in the County of Mercer". This normal school was founded by veterans of both the Union and the Confederacy, Concord is named for the ideal of "harmony and sweet fellowship".

Kutztown University of Pennsylvania is a public university in Kutztown, Pennsylvania. It is part of the Pennsylvania State System of Higher Education (PASSHE) and is accredited by the Middle States Association of Colleges and Secondary Schools. Pennsylvania Department of Education

Randolph–Macon College is a private liberal arts college in Ashland, Virginia. Founded in 1830, the school has an enrollment of more than 1,500 students. The college offers bachelor's degrees. 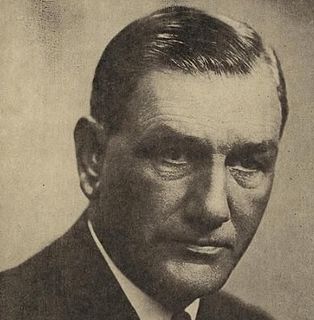 Harley Orrin Staggers Sr. was an American politician who served 16 terms in the United States House of Representatives from 1949 to 1981, representing West Virginia's 2nd Congressional District as a Democrat. From 1966 until his retirement in 1981, Congressman Staggers chaired the powerful House Committee on Interstate and Foreign Commerce. A longtime supporter of the American railroad industry and its workers, Congressman Staggers' landmark legislative achievement was the Staggers Rail Act, passed in 1980.

Harley Orrin "Buckey" Staggers Jr. is an American politician and lawyer from West Virginia. He served five terms as a Democrat in the United States House of Representatives. 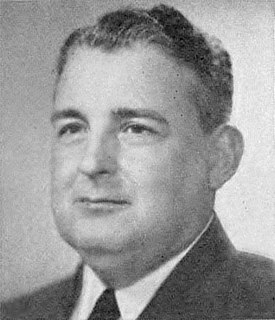 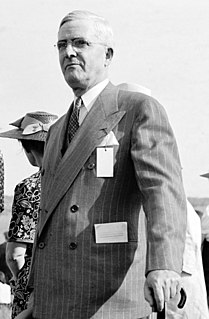 James Hubert Price was an American politician who was elected 53rd Governor of Virginia in 1937, during the Great Depression and became known as the Commonwealth's "New Deal Governor." Over the opposition of the Byrd Organization, Price, a Virginia attorney and businessman, passed many social programs and implemented other federal programs to benefit Virginians. Price had previously represented Richmond as one of its delegates in the Virginia House of Delegates for over a decade (1916–1930), as well as served as Lieutenant Governor for two terms beginning in 1930.

Raymond W. Smock is an American historian, who is the Director Emeritus of the Robert C. Byrd Center for Congressional History and Education at Shepherd University, and formerly the Historian of the United States House of Representatives (1983-1995). 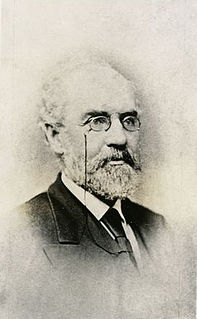 Alexander Robinson Boteler was a nineteenth-century planter turned businessman, as well as artist, writer, lawyer, Confederate officer, philanthropist and politician from Shepherdstown in what was initially Virginia and became West Virginia in the American Civil War. 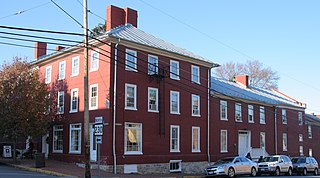 Rumsey Hall, also known as the Entler Hotel, is an historic building in Shepherdstown, West Virginia. The building is located in the center of the Shepherdstown Historic District and is a composite of six separate phases of construction. The earliest portion was built in 1786, and was the home belonging to Christian Cookus. This section burned in 1912. This section was separated by a narrow passage from the core of the hotel property, first started in the 1790s by owner Daniel Bedinger. This Federal style structure was expanded to the corner sometime before 1809, with a further addition along Princess Street by 1815. A kitchen and a carriage house completed the complex. Significant interior features remain. In 1809 a store was opened in the corner building, operated by James Brown. At about the same time, the Globe Tavern opened, offering overnight accommodations. In 1815, Bedinger sold the property to James Brown and Edward Lucas for $6,000. In 1820 it was again sold, to Thomas Crown of Washington, D.C., for $4000. By this time the tavern was managed by Thomas James and the hotel by Daniel Entler. In 1823, Daniel Entler became the manager of the entire property. The Entlers managed the properties until 1873, when they moved to Piedmont, West Virginia, while retaining ownership of the hotel.

The Shepherdstown Historic District comprises the historic core of Shepherdstown, West Virginia. The town is the oldest in West Virginia, founded in 1762 as Mecklenburg. No structures are known to exist from the time before the town became known as Shepherdstown. The historic district is concentrated along German Street, the main street, with 386 contributing resources and 69 non-contributing elements. The chief representative period is the late 18th century, with many Federal style brick houses. German Street is also furnished with 19th-century "street furniture" such as metal fences, mounting blocks, wooden pumps and mature trees.

The George Tyler Moore Center for the Study of the Civil War in Shepherdstown, West Virginia, is a Civil War research center at Shepherd University.

The Contemporary American Theater Festival (CATF) is an American annual professional theatre festival held at Shepherd University, located in Shepherdstown, West Virginia. According to the New York Times, it is one of "50 essential summer festivals". In 2016, Germany's World Guide identified the festival as one of the "Top 10 theatre festivals not to miss this summer". A representative of the Theatre Communications Group in its publication American Theatre stated that "(CATF's) forward focus has helped ... change the American theatre conversation, bringing new voices and pressing topics to the stage ..."

Margaret Anne "Peggy" Staggers was a Democratic member of the West Virginia House of Delegates and served as an Assistant Majority Whip. Staggers is an emergency physician.

John Henry Hill was an American lawyer, educator, school administrator, and military officer. He was the second principal of the West Virginia Colored Institute from 1894 until 1898. West Virginia State considers him its second president.