The athletic nickname, or equivalently athletic moniker, of a university or college within the United States is the name officially adopted by that institution for at least the members of its athletic teams. Typically as a matter of engendering school spirit, the institution either officially or unofficially uses this moniker of the institution's athletic teams also as a nickname to refer to people associated with the institution, especially its current students, but also often its alumni, its faculty, and its administration as well. This practice at the university and college tertiary higher-education level has proven so popular that it extended to the high school secondary-education level in the United States and in recent years[ timeframe? ] even to the primary-education level as well.

Often by choosing an abstract concept as its athletic moniker, the institution wants to inspire its student-athletes on and off the field to achieve success that the abstract concept represents. Examples: Cornell Big Red, Stanford Cardinal, UIC Flames, Tulane Green Wave.

Often by choosing an animal, the school wants to emphasize the instillation of fear of losing athletic competitions to the institution's teams, such as through an especially fierce or stealthy animal. When the school chooses an animal as its athletic nickname, usually in the plural or as a collective noun for a group of that animal, then typically, the school has that animal (in the singular) as its mascot, [1] either specifically named with a proper noun or generically referred to without a proper noun. Examples: Michigan Wolverines, Oregon Ducks, Princeton Tigers, Iowa Hawkeyes, California Golden Bears, Minnesota Golden Gophers, Texas Longhorns.

Often by choosing a collection that represents a summary of the institution's students or of its history. Such a collection may refer to an ethnicity; a profession; religious designation, such as saints; or other groupings of people. A portion of athletic monikers that fall into this collection category started originally as derogatory epithets from others, but as an act of defiance, the school embraced the term as a rallying cry to overcome the term's negative origin. Because a collection is hard to represent or iconify, when a school chooses a collection as its athletic nickname, the school typically chooses a related but different mascot that symbolizes that collection. Examples: Notre Dame Fighting Irish, Oklahoma Sooners, Purdue Boilermakers, Illinois Fighting Illini, Texas A&M Aggies

A small number of schools choose an archetypical heroic person as their official athletic nickname. This person may be a graduate of the school who is viewed as embodying the school's mission or an archetypal person who is symbolic of the school's area, such as the West Virginia University Mountaineer. In religiously affiliated schools, this person may be a historical person in the religion who has been bestowed an official designation in that religion, such as a saint in Catholic or Eastern Orthodox Church.

Likenesses to Native Americans were at one time widely popular athletic monikers, especially for schools that adopted them in the 19th or early 20th century. In recent years, some Native American organizations have protested the unlicensed use of likenesses of Native Americans related to team names, team logos, athletic monikers, cheerleaders, and cheering techniques. The granting of overtly expressed written licenses by Native American organizations to use likenesses of Native Americans in these ways is rare, although not unheard of. In one notable example, two major groups of the Seminole nation, the Seminole Tribe of Florida and Seminole Nation of Oklahoma, have expressly given Florida State University permission to use the nickname "Seminoles" and certain Seminole imagery. Central Michigan University has a similar arrangement with the Saginaw Chippewa Indian Tribe to use the name "Chippewas".

Because of protests from some Native American organizations, some schools have changed their athletic moniker and mascot and cheering practices without significant objection once the issue was raised, especially if such offense toward a group of people was viewed as incompatible with that school's stated mission or if the threat of legal action was too burdensome. Other schools or their student bodies have defended their use of Native American likenesses, especially if the institution views the use of Native American likenesses as respectful or so intimately tied with history to be inseparable from the institution, such as if the name of institution derives from the name of a tribe. Still other schools have embarked on a series of failed attempts to find a replacement. [1]

Often, certain nicknames (animals and some abstract concepts, such as Giants, Broncos, or Wildcats) become very common. However, some nicknames are unique to that school/team such as Illini, Demon Deacons or Fords. 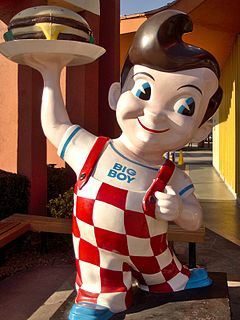 A mascot is any human, animal, or object thought to bring luck, or anything used to represent a group with a common public identity, such as a school, professional sports team, society, military unit, or brand name. Mascots are also used as fictional, representative spokespeople for consumer products.

McMurry University is a private Methodist university in Abilene, Texas. It was founded in 1923 and named after William Fletcher McMurry. The university offers forty-five majors in the fields of fine arts, humanities, social and natural sciences, education, business, and religion, and nine pre-professional programs, including nursing, dentistry, medicine, pharmacy, veterinary, and law.

Blood quantum laws or Indian blood laws are laws in the United States and the former Thirteen colonies that define Native American status by fractions of Native American ancestry. These laws were enacted by the American government as a way to establish legally defined racial population groups. By contrast, many tribes and nations do not include blood quantum as part of their own enrollment criteria.

The Illinois Fighting Illini are the intercollegiate athletic teams that represent the University of Illinois Urbana-Champaign. The university offers 10 men's and 11 women's varsity sports. 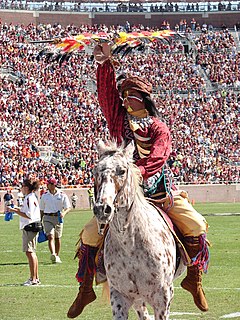 Osceola and Renegade are the official mascots of the Florida State University Seminoles. Osceola, representing the historical Seminole leader Osceola, and his Appaloosa horse Renegade introduce home football games by riding to midfield with a burning spear and planting it in the turf.

Charlene Teters is a Native American artist, educator, and lecturer. Her paintings and art installations have been featured in over 21 major exhibitions, commissions, and collections. She is a member of the Spokane Tribe, and her Spokane name is Slum Tah. She was born and raised in Spokane, Washington, near the Spokane Indian Reservation. 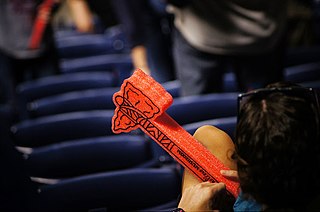 Since the 1960s, the issue of Native American and First Nations names and images being used by sports teams as mascots has been the subject of increasing public controversy in the United States and Canada. This has been a period of rising Indigenous civil rights movements, and Native Americans and their supporters object to the use of images and names in a manner and context they consider derogatory. They have conducted numerous protests and tried to educate the public on this issue.

David Narcomey is a member of the Seminole Nation of Oklahoma and an activist who was the regional director of the North Florida chapter of the American Indian Movement or AIM.

Reveley, also known as the Griffin, is the mascot of The College of William & Mary. A mythical creature with the head of an eagle and the body of a lion, it was announced as William & Mary's mascot by President Taylor Reveley April 6, 2010. The Griffin mascot beat out the other four finalists: a King and Queen, a Phoenix, a Pug, and a Wren. The College had not had an official mascot since the late 1970s. It was named Reveley in 2018 to honor university president Taylor Reveley upon his retirement.

Ace the Warhawk is the mascot for the Louisiana–Monroe Warhawks, the athletic teams of the University of Louisiana at Monroe in Monroe, Louisiana, USA. Ace is an anthropomorphic hawk who performs at all ULM athletic events.

Sports teams named Redskins are part of the larger controversy regarding the use of Native American names, images and symbols by non-native sports teams. Teams of this name have received particular public attention because the term redskin is now generally regarded as disparaging and offensive.

In 2005 the National Collegiate Athletic Association (NCAA) distributed a "self evaluation" to its member institutions for teams to examine the use of potentially offensive imagery with their mascot choice. This examination was done in accordance with NCAA policy that requires each member institution to maintain an "atmosphere of respect for and sensitivity to the dignity of every person." Fourteen schools either removed all references to Native American culture or were deemed not to have references to Native American culture as part of their athletics programs. Subsequently, 19 teams were cited as having potentially "hostile or abusive" names, mascots, or images, that would be banned from displaying them during post-season play, and prohibited from hosting tournaments.

The use of terms and images referring to Native Americans/First Nations as the name or mascot for a sports team is a topic of public controversy in the United States and in Canada, arising as part of the Native American/First Nations civil rights movements. Since the 1960s, there have been a number of protests and other actions by Native Americans and others targeting the more prominent use of such names and images by professional franchises such as the Cleveland Indians and the Washington Redskins. However, discourse surrounding mascot usage by elementary, middle, and high schools has been prominent, as these entities are subject to public legislation and community input.