The San Francisco Dons is the nickname of the athletic teams at the University of San Francisco (USF). The Dons compete in NCAA Division I of the National Collegiate Athletic Association (NCAA) as members of the West Coast Conference (WCC), of which USF is a charter member.

Athletics at USF dates back to its founding in 1855, when founder Anthony Maraschi, S.J. organized ball games as recreation for the first students. However, intercollegiate competition only dates back to 1907, when then-Saint Ignatius College began playing organized baseball, basketball, and rugby against other local colleges and high schools. Rivalries with neighboring Santa Clara University and Saint Mary's College of California have their origins in this early period.

2005 was a banner year for the baseball program, as the Diamond Dons finished with a 38–18 record (the best in team history), placed eight players in the all-conference team and earned Nino Giarrantano coach of the year honors. This was followed in 2006 with a 38–21 record, the WCC conference regular season championship, and a Top 25 ranking. However, USF lost in the WCC conference championship to Pepperdine but still was given an at large berth into their first ever postseason. USF did not advance in the tournament as they were beaten by the University of Miami, and Manhattan College.

Nino Giarrantano became head coach in 1998, previously serving as hitting coach at Arizona State University. Giarrantano was named 3-time JC National Coach of the Year and 2005–2006 WCC Coach of the Year. Since arriving at USF, the team has had its best four-year stretch in its program's history, 104-69 overall since 2004.

The Dons' home field is named after Dante Benedetti, USF's head coach from 1962 to 1980. Benedetti attended then-Saint Ignatius College from 1937 to 1940, during which he lettered in Baseball, Football, and Boxing. During his tenure as head coach, he accumulated 373 career wins, and has been inducted into the university's athletic hall of fame. Also during his tenure as head coach, the university wanted to cut the program for financial reasons. However to keep the program alive Benedetti agreed to lower his salary. For the remaining 16 years of his coaching career he was paid $1 a year.

The field is also named after Max Ulrich, a benefactor of the University of San Francisco.

Since 2006, USF has played one game a season at the San Francisco Giants' Stadium, Oracle Park. The proceeds of the game go to the Dante Benedetti Foundation, a charity that helps under-privileged youth in San Francisco play and learn the game of baseball.

Over the years of USF's baseball tradition, a number of players have been drafted into professional baseball. Of these players, a few have had debuts in the Major Leagues:

USF retained its status as a basketball powerhouse into the 1970s and early 80s, holding the distinction of being a "major" program in a "mid-major" conference (the WCC having declined somewhat in stature since the 1960s). It held the number-one spot in the polls on numerous occasions. In 1977, led by All-American center Bill Cartwright, the Dons went 29–0 and were regarded as the #1 team in the nation in both major polls before dropping their last two games.

The Dons' prominence in the 1970s came at a price, however. The NCAA placed the Dons on probation two times in the late 1970s. Head coach Bob Gaillard was fired after the first, and an in-house inquiry after the second resulted in the firing of his successor, Dan Belluomini. It was also well known that basketball players got special treatment; many of them were marginal students at best, and at least one instance where a player threatened another student was swept under the rug by school officials. [8] It was also common for "tutors" to take tests and write papers for players. [9]

The situation came to a head in December 1981, when All-American guard Quintin Dailey assaulted a female student. During the subsequent investigation, Dailey admitted taking a no-show job at a business owned by a prominent non-sports USF donor. The donor had also paid Dailey $5,000 since 1980. Combined with other revelations, school president Rev. John Lo Schiavo announced on July 29, 1982 that he was suspending the basketball program—the first time a school had shut down a major sport under such circumstances. The move was applauded by several members of the coaching fraternity, [8] as the Dailey matter revealed a program that was, in the words of San Francisco Chronicle sportswriter Glenn Dickey, "totally out of control." [9]

LoSchiavo resurrected the program in 1985 under former star Jim Brovelli, who quickly returned the program to respectability. He was not able to reach postseason play, however, and resigned in 1995. The program has only reached the postseason twice since its revival—an NCAA berth in 1998 under Phil Mathews and a 2005 NIT berth under former coach Jessie Evans.

The program regressed the next few years, and Jessie Evans was granted a request for a 'leave of absence' on December 27, 2007. Basketball coach Eddie Sutton took over on an interim basis, needing two wins for a personal milestone of 800 career coaching victories. At the time, Bob Knight was the only other Division I men's coach to have accomplished the feat. After months of speculation, Evans was finally officially fired by USF on March 20, 2008, and a national coaching search was launched, including the use of an executive search consultant company, DHR International.

On March 30, 2016, Kyle Smith was named as the new head coach. Prior to joining USF, Smith had spent the prior six years as head coach of the Columbia University basketball team. For nine years prior to that, he was assistant coach at Saint Mary's College of California, which went to the Sweet 16 in his final year. [11]

Women's basketball also experienced recent successes, including appearances in the NCAA women's tournament in 1995, 1996, 1997, and 2016 and a WNIT berth in 2002. The 1996 season represented their best ever, as the women's team made it into the tournament's Sweet Sixteen. The team is presently coached by Molly Goodenbour. [12]

Compared to local rivals Santa Clara and Saint Mary's, USF's football teams were historically not as strong. However, the Dons entered college football lore by going undefeated in 1951 and producing three NFL hall of famers (Gino Marchetti, Ollie Matson, and Bob St. Clair). However, they did not receive a bowl invitation, as the team turned down any suggestions that they leave their two black teammates at home at the expense of a much-needed bowl bid. Due to the associated financial burden on the school that a bowl bid would have alleviated, USF's finest football team ever was its last at the major college level (now Division I FBS). Though football made a brief comeback as a Division II sport during the 1960s and 1970s, USF has not fielded a varsity team since.

Kuharich, at times, would delegate recruiting responsibilities to his freshman coach, Brad Lynn, who had little to offer prospective players in the way of scholarship inducements beyond tuition and room and board in an old ROTC barracks. However, Lynn would take recruits to the highest hill on campus, and would gesture out towards the sweeping panorama of San Francisco saying, "THIS is your campus." Only a handful of players from that 1951 team had been considered blue-ribbon prospects in high school. Two of the team's best players, Toler and guard Louis (Red) Stephens, had not even played high school football. Future Hall of Famer Marchetti was a high school dropout who had played only sparingly when he was in school.

Alejandro Toledo, the former president of Peru, played for USF on a partial scholarship.

The Women's cross country team won four consecutive WCC championships in 2009–2012, and in 2011 made an NCAA Championship appearance. They maintained national rankings in both 2011–2012. Israeli Olympian Maor Tiyouri competed for the team.

The women's volleyball team has made two NCAA tournament appearances: in 2003, under former coach Jeff Nelson, and in 2008 under current coach Gilad Doron. The 2008 season saw the Dons finish with a Top 25 national ranking, a 22–8 record, and five all-WCC players.

USF participates in the following club sports: golf, fencing, boxing, rifle, tennis, karate, soccer and lacrosse. Rugby, which was one of the first varsity sports in school history, is currently a club sport. Football is played on the intramural level.

In 2013, USF hosted the inaugural championships of the United States Intercollegiate Boxing Association, the first national collegiate tournament in the US to include women's boxing. [14] 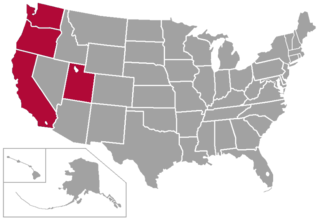 The West Coast Conference (WCC) — known as the California Basketball Association from 1953 to 1956 and then as the West Coast Athletic Conference until 1989 — is a collegiate athletic conference affiliated with NCAA Division I consisting of ten member schools across the states of California, Oregon, Utah, and Washington. 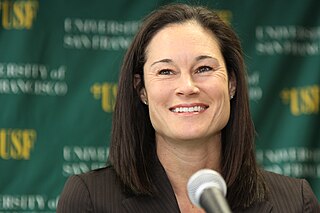 Philipp D. Woolpert was an American basketball coach, best known as the head coach of the University of San Francisco Dons in the 1950s. He led them to consecutive national championships in 1955 and 1956.

Philip Arnold Smith was an American professional basketball player who played for 9 seasons in the National Basketball Association (NBA).

James Mario Brovelli is the former men's basketball head coach of the University of San Francisco (USF) Dons and hall of fame player. 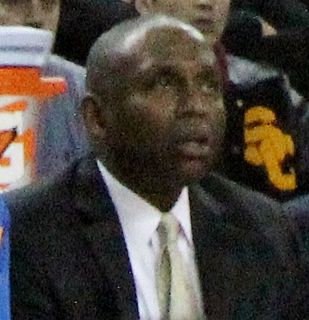 The San Francisco Dons men's basketball team represents the University of San Francisco in NCAA Division I men's college basketball. The Dons compete in the West Coast Conference, in which they have the winningest program, and have won sixteen regular season championships and one conference tournament championship. The current head coach is Todd Golden. They play home games at the War Memorial Gymnasium, which also serves as the venue for women's basketball, volleyball, athletic department offices, and athletic training rooms. Some games may be played at the Chase Center.

The 1981–82 NCAA Division I men's basketball season began on November 27, 1981, progressed through the regular season and conference tournaments, and concluded with the 1982 NCAA Men's Division I Basketball Tournament Championship Game on March 29, 1982, at the Louisiana Superdome in New Orleans, Louisiana. The North Carolina Tar Heels won their second NCAA national championship with a 63–62 victory over the Georgetown Hoyas.

The Saint Mary's Gaels are the athletic teams that compete at Saint Mary's College of California in Moraga, California. The nickname applies to the college's intercollegiate NCAA Division I teams and to the school's club sports teams. Most varsity teams compete in the West Coast Conference.

The Santa Clara Broncos men's basketball team represents Santa Clara University in NCAA Division I basketball competition. The team plays home games at the Leavey Center in Santa Clara, California and have been members of the West Coast Conference since its formation in 1952. The team is currently coached by Herb Sendek, who had previously been the head coach at NC State and Arizona State. Sendek was hired on March 29, 2016.

The War Memorial at the Sobrato Center in San Francisco, California is an athletic venue on the University of San Francisco (USF) campus. It contains War Memorial Gymnasium and serves as home for the San Francisco men's and women's basketball teams as well as the women's volleyball team. It also houses athletic department offices and training facilities for the university's other athletic teams. It is currently the oldest basketball venue in the West Coast Conference. It is popularly known as "The Hilltop" because of USF's position on the summit of Lone Mountain.

Dior Alexandros Lowhorn is an American professional basketball player. He now plays for Plateros de Fresnillo of the LNBP. He played college basketball for Texas Tech and San Francisco.

Oliver Johnson is a retired American basketball player. He was an All-American forward at the University of San Francisco and a first-round draft pick in the National Basketball Association (NBA) in 1965.

Anthony "Nino" Giarratano is an American college baseball coach, currently serving as head coach of the San Francisco Dons baseball team. He has held that position since prior to the 1999 season.