Tom Wright (born 18 September, 1957) is a British architect best known as the designer of the Burj Al Arab in Dubai, United Arab Emirates. [1] [2]

Born in Shirley, Croydon, Surrey in 1957,[ citation needed ] Wright studied at the Royal Russell School and then later at the Kingston University School of Architecture. Wright qualified as an architect the same year he was accepted as a member of the Royal Institute of British Architects in 1983 [1] and went on from there to become a director of the architectural practice Lister Drew Haines Barrow, which was taken over in 1991 by Atkins. Wright became head of Atkins' architecture arm. [3]

Wright became design director for the Jumeirah Beach Resort, Dubai, and designed the Burj Al Arab (Tower of the Arabs) at the same time. It was conceived in October 1993 and finished in 1999. The brief was to create an icon for Dubai: a building that would become synonymous with the place, as the Sydney Opera House is with Sydney and the Eiffel Tower is with Paris. The hotel is built in the shape of a dhow's (a traditional Arabic ship) sail to reflect Dubai′s seafaring heritage combined with a modern aspect moving forwards into the future. It costs 2,600 dollars on average per night to stay in a room at the hotel.

One of his most recent projects is the co-design of Celebrity Cruises' new ship, Celebrity Edge,. [5] which brings a number of innovations to the cruise ship industry

The Burj Al Arab is a luxurious five star hotel located in the city of Dubai, United Arab Emirates. One of the tallest hotels in the world, it is the seventh tallest, although 39% of its total height is made up of non-occupiable space. Burj Al Arab stands on an artificial island 280 m (920 ft) from Jumeirah Beach and is connected to the mainland by a private curving bridge. The shape of the structure is designed to resemble the sail of a ship. It has a helipad near the roof at a height of 210 m (689 ft) above ground.

The year 1999 in architecture involved some significant architectural events and new buildings.

In architecture, an atrium is a large open air or skylight covered space surrounded by a building. Atria were a common feature in Ancient Roman dwellings, providing light and ventilation to the interior. Modern atria, as developed in the late 19th and 20th centuries, are often several stories high and having a glazed roof or large windows, and often located immediately beyond the main entrance doors.

Tom Wright may refer to: 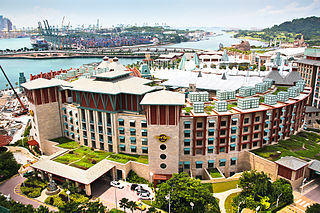 Al Rajhi Tower is a $500 million USD tower currently proposed for Riyadh, Saudi Arabia. Designs for the sail-shaped tower have been drawn up by architects at Atkins. The tower is being built on behalf of the Al Rajhi family and will be used for commercial purposes. The family, considered by most in Saudi Arabia, as the country's wealthiest non-royals, is among the world's leading philanthropists. 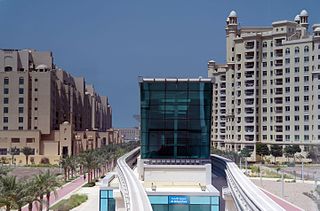 Atkins is a British multinational engineering, design, planning, architectural design, project management and consulting services company. It is presently owned by the Canadian construction firm SNC-Lavalin and is headquartered in London, UK.

Adrian Smith + Gordon Gill Architecture (AS+GG), an architecture firm and design firm based in Chicago, is engaged in the design and development of energy-efficient and sustainable architecture. AS+GG designs buildings, cities, masterplans and components of these. It creates designs for an international clientele with projects located throughout the world. The primary uses of these designs are civic, commercial, cultural, hospitality, residential and mixed-use. AS+GG also specializes in supertall skyscrapers, such as the Jeddah Tower, which will overtake the Burj Khalifa as the world's tallest building when completed in 2020.

There are many tourist attractions in Dubai, resulting from the large scale construction boom. Mohammed bin Rashid Al Maktoum, the current Ruler of Dubai and the prime minister of the United Arab Emirates, wants Dubai to become the top tourist destination in the world. Dubai received 14 million tourists from all around the world in 2015. Euromonitor ranked the world's 150 most visited cities by international tourists in 2009; Dubai ranked 7th. Dubai hosted a record 10 million visitors in 2012, an increase of 9.3% from the previous year. Dubai's economy relies on many sections of the "state", one of the most important being tourism, in 2014 total 70,475,636 passengers traveled through Dubai Airport. To maintain this important position in the tourism industry they have been known to create big and impressive tourist attractions.

George J. Efstathiou, FAIA, RIBA is an American architect of Greek descent. George joined Skidmore, Owings and Merrill, LLP (SOM) in 1974, where he served as Managing Partner and later Consulting Partner in the Chicago office until 2016. He is currently leading the consulting practice of Efstathiou Consulting LLC which serves clients in the architecture, planning, interiors design as well as others in the real estate and corporate communities.

The W Barcelona Hotel, popularly known as the Hotel Vela due to its shape, is a building designed by Ricardo Bofill is located in the Barceloneta district of Barcelona, in the expansion of the Port of Barcelona. The hotel is managed by Starwood Hotels and Resorts hotel chain and marketed under the brand W Hotels.

The architecture of the United Arab Emirates has undergone dramatic transformation in recent decades, from operating as a collection of fishing villages to a global business hub known for its innovation and dynamism. Between the 1960s and 1970s, architecture in the United Arab Emirates (UAE) remained solely traditional, with narrow alleys and windtower houses still in use, reflective of a strong Bedouin heritage. Architecture is influenced by elements of Islamic, Arabian and Persian culture.