Tom nan Gamhna is a mountain within the Ardgoil Peninsula and Arrochar Alps near Lochgoilhead in Argyll. The Mountain reaches a height of 389m. 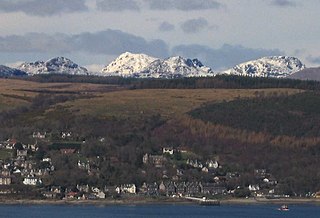 The Arrochar Alps are a group of mountains located around the head of Loch Long, Loch Fyne,and Loch Goil, near the villages of Arrochar and Lochgoilhead, on the Cowal Peninsula in Argyll and Bute, Scotland. The mountains are especially popular with hillwalkers, due to their proximity and accessibility from Glasgow. They are largely within the Loch Lomond and the Trossachs National Park and in part also extend into the Argyll Forest Park. Glens which go into the heart of the range include: Glen Croe, Hell's Glen and Glen Kinglass.

Lochgoilhead; is a village, on the Cowal peninsula, in Argyll and Bute, Scottish Highlands. It is located within the Loch Lomond and The Trossachs National Park and is widely considered to be one of the most beautiful areas in Argyll and in Scotland as a whole. 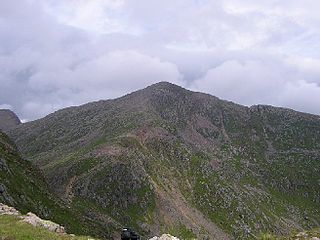 Ben Cruachan is a 1126 m mountain that is the highest point in Argyll and Bute, Scotland. It gives its name to the Cruachan Dam, a pumped-storage hydroelectric power station located in a cavern inside the mountain, Cruachan! is the battle cry for Highland clans Campbell and MacIntyre.

Beinn Ìme is the highest mountain in the Arrochar Alps, in the Southern Highlands of Scotland. There are three usual routes of ascent. From Succoth, one may follow the same path that is used to reach The Cobbler before taking the right fork near the base of the Cobbler's main crags and continuing up the glen, across the bealach and up Ben Ìme's eastern ridge. Alternatively, the summit can be reached from the pass of Rest and be Thankful and from the Loch Lomond side, using the private road that leads to Loch Sloy. Beinn Ìme separates the Dunbartonshire landscape of Loch Lomond in the East and the Argyll Highlands of Loch Fyne and Loch Goil anywhere north, west, south west. Beinn Ìme is the landmark to the entrance to Argyll. 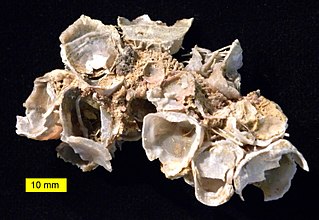 In the geologic timescale, the Roadian is an age or stage of the Permian. It is the earliest or lower of three subdivisions of the Guadalupian epoch or series. The Roadian lasted between 272.95 and 268.8 million years ago (Ma). It was preceded by the Kungurian and followed by the Wordian.

The Highland Connection is the second album by Celtic rock band Runrig. It was released in 1979.

Gunna is an island in the Inner Hebrides of Scotland.

Ben Bhuidhe is a Scottish mountain at the head of Loch Fyne, Argyll and Bute.

Meall nan Tarmachan is a mountain in the Southern Highlands of Scotland near Killin just west of Ben Lawers. It is often climbed as part of the Tarmachan ridge, the other peaks of which are Meall Garbh, Beinn nan Eachan and Creag na Caillach ; these three peaks are Tops rather than Munros, and lie to the south-west of Meall nan Tarmachan.

Benderloch is a village in Argyll and Bute, Scotland. The name is derived from Beinn eadar dà loch, meaning "mountain between two lochs".

Beinn Reithe is a mountain in Argyll in the Scottish Highlands and forms part of the Ardgoil Peninsula and Arrochar Alps. Beinn Reithe is located between Loch Goil and Loch Long; it reaches a height just over 2000 ft. The mountain is most noticeable from the western shores of Loch Goil and it is also within Loch Lomond and the Trossachs National Park.

Argyll's Bowling Green is an area on the Ardgoil estate in Argyll and Bute, Scotland. It is also known as the Ardgoil peninsula and is the most southerly part of the Arrochar Alps and lies between Loch Goil and Loch Long. It is part of the Argyll Forest Park and is within the Loch Lomond and the Trossachs National Park.

Tom Molach is a peak within the Ardgoil Peninsula and Arrochar Alps near Lochgoilhead in Argyll, Scotland. The peak reaches a height of 370 metres (1,210 ft). 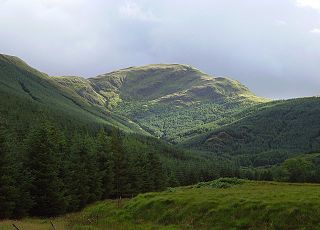 Cruach nan Capull is a mountain within the Arrochar Alps, near Loch Fyne, Argyll and Bute, Scotland. It stands on the southern side of Hell's Glen and rises to a height of 611 m (2005 ft).

Ceabhaigh is a small island in an arm of Loch Ròg on the west coast of Lewis in the Outer Hebrides of Scotland. It is about 25 hectares in extent. It is not known if the island was ever permanently inhabited. 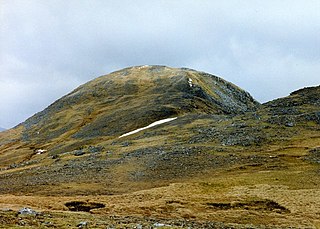 Sgùrr Thuilm is a mountain in the Glenfinnan area of the Highlands of Scotland. It stands at the head of Glen Finnan approximately 7 kilometres (4 mi) north of Loch Shiel.

Edmunds Store is an unincorporated community located in Brunswick County, in the U.S. state of Virginia.