The Tomah Public Library is located in Tomah, Wisconsin. It was added to the National Register of Historic Places in 1976. [1]

The library was constructed in 1915 to serve the City of Tomah and the surrounding area. It is a Carnegie library. In 1911 Ernest Buckley, who was a successful geologist, left the city of Tomah $12,000 to be used for a park or library. The city leaders set aside $7,000 for a library and requested a grant of $10,000 from the Carnegie Foundation. In 1915 they received the grant and secured the services of Claude and Starck. Unlike the typical Sullivanesque ornament, which is made of glazed terra cotta, the Tomah library's frieze is made of staff, a mixture of gypsum and fiber. In 1980 the original building was added onto, nearly doubling in size. [2] [3]

The St. Petersburg Public Library is a Carnegie library built in 1915 in Beaux-Arts style. It was one of 10 Florida Carnegie libraries to receive grants awarded by the Carnegie Corporation of New York from 1901 to 1917. Steel magnate and philanthropist Andrew Carnegie provided funding for more than 3,000 Carnegie libraries in the United States, Canada, and Europe. The library is significant to the city's history as the first permanent home of the public library system and embodies the transformation of the city in the second decade of the twentieth century from a pioneer village to a city with viable cultural institutions.

Dodge City Public Library, located north of downtown at 1001 N 2nd Ave, Dodge City, Kansas, is the city's main library. A member of the Southwest Kansas Library System, it has a collection of approximately 123,000 volumes, and it circulates more than 189,000 items annually. It offers several services to the public, including computer classes, public internet access, and programs for children and adults.

The Carnegie Branch Library at 13th St and 28th Ave in Meridian, Mississippi is one of two former Carnegie libraries in the city, both funded by a grant from Andrew Carnegie in 1904. This library was built for blacks while the other was built for whites. The other library was built at 25th Ave and 7th St and now houses the Meridian Museum of Art. Both buildings were listed on the National Register of Historic Places in 1979. The black library was demolished in 2008. 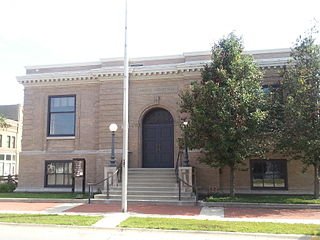 The Perry Carnegie Library Building, also known as the Carnegie Library Museum, is a historic structure located in Perry, Iowa, United States. The Perry Library Association was established in 1894, and William Tarr served as its first librarian. Andrew Carnegie accepted Perry's application for a grant for $10,600 on January 13, 1903. The Des Moines architectural firm of Liebbe, Nourse & Rasmussen designed the Neoclassical building that was built by local contractor Courtney and Bolt. It opened in September 1904 was dedicated on December 10.

The Cherokee Public Library is located in Cherokee, Iowa, United States. A library was begun in town in 1886 by the Cherokee Ladies Library Association. The collection of books was housed in the YMCA and other shared facilities. It was poorly funded, and the city of Cherokee took over the library in 1898 after voters passed a referendum. The Carnegie Corporation of New York had accepted the city's application for a grant for $10,000 on January 6, 1903. They hired Oskaloosa, Iowa architect Frank E. Wetherell to design the new building, which was built by Hansen and Lambkin of New Hampton, Iowa. Carnegie donated a further $2,000 to complete construction. It was dedicated on May 2, 1905.

The Mason City Public Library is located in Mason City, Iowa, United States. The building that was funded by Andrew Carnegie, and is now an office building, was listed on the National Register of Historic Places in 1989. It was included as a contributing property in the Mason City Downtown Historic District in 2005.

The Easton Area Public Library serves the community of Easton in Northampton County, Pennsylvania. The present Carnegie library was predated by a community library constructed by the Easton Library Company in 1811. With a grant in 1901 for $57,000 by industrialist Andrew Carnegie a new library began construction at 515 Church Street and was completed in 1903. The library system consists of the Easton library serving as the headquarters, and the Palmer Branch located at 1 Weller Place, Palmer Township which was constructed in 1986. 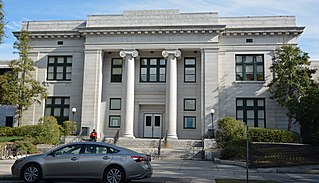 The Live Oak Public Libraries are a consortium of sixteen public libraries in the Savannah metropolitan area and Hinesville – Fort Stewart metropolitan area of Georgia. The library provides services for Chatham County, Effingham County, and Liberty County. The library headquarters are located in the Bull Street Library in Savannah, Georgia, which is one of two Carnegie libraries in the system.

The Brooks County Public Library is a single branch public library system serving county of Brooks, located in Georgia. The library is located in Quitman, Georgia. 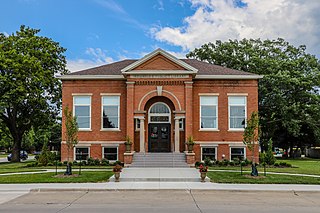 The Indianola Carnegie Library is a historic building located in Indianola, Iowa, United States. In November 1902 the local library board submitted a grant application to Andrew Carnegie so they could build a new building. The $10,000 grant was approved on January 13, 1903, and $2,000 was added at a later date. The Indianola City Council agreed to allocate $1,000 a year toward its upkeep. They also bought two lots at the corner of Buxton and Boston. One of the lots was owned by the family of Hannah Babb, the city librarian. Local architect Frederick W. Keith designed the brick Neoclassical structure, and it was built by G.W. James. The library eventually outgrew the building and it was replaced in 1984. The Des Moines Metro Opera has their offices in the old Carnegie building. It was listed on the National Register of Historic Places in 2017.

The Caldwell Carnegie Library in Caldwell, Idaho, also known as the Caldwell Veterans Memorial Hall, was constructed from a grant by the Carnegie library foundation. The building opened in 1914 and was added to the National Register of Historic Places June 18, 1979. Its modest, 1-story Renaissance design is credited to Charles Carroll Soule and features reading rooms on either side of the main entrance. The building also includes a full basement with lecture hall.