Tomasz Sobecki (born 1952 in Toruń, Poland), has been an active fine art photographer since 1981. He has had many exhibitions in prestigious Polish art and photography galleries. He has had numerous individual exhibitions abroad in European countries (England, Switzerland, Finland) and United States, participation in international collective exhibitions in Belgium, Germany and Japan. He is the Polish art representative in Caracas, Venezuela.

Toruń is a city in northern-central Poland, on the Vistula River. Its population was 202,562 as of December 2017. Previously it was the capital of the Toruń Voivodeship (1975–98) and the Pomeranian Voivodeship (1921–45). Since 1999, Toruń has been a seat of the self-government of the Kuyavian-Pomeranian Voivodeship and, as such, is one of its two capitals. The cities and neighboring counties form the Bydgoszcz–Toruń twin city metropolitan area. Toruń itself is the sixteenth-largest city in Poland and the second in the voivodeship.

The most known photo series

He invited to an “art dialogue” as a part of the Franciszek Starowieyski “Face” series. (“Arsenal Gallery” in Toruń, 2002).

Participation in Polish and international symposia of photographers and designers.

The originator and co-organizer of commercial publications contest – “Idea” (1996 – 2000). Works in collections of Art Museum of Łódź, District Museum of Toruń, private and public collections in Poland and abroad. Organizer and curator of the “European Design Annual 1999” exhibition. He has also taught a course in IIT Hyderabad. 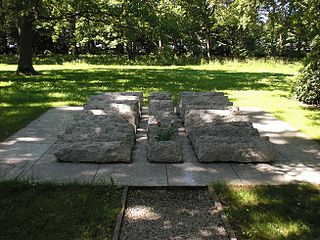 Jan Michał, 6th Chevalier de Weryha-Wysoczański-Pietrusiewicz, known as Jan de Weryha-Wysoczański, is a Polish sculptor and Concrete artist. He was born in Gdańsk. From 1971 to 1976 he studied sculpture at the Academy of Fine Arts in Gdańsk. Since 1981, he has been living and working in Hamburg. In 1998, he won the 1st prize, the Prix du Jury, awarded by the Ministry of Culture of the Grand Duchy of Luxembourg at the 'Salon de Printemps 98', Luxembourg. In 1999, he created a monument in memory of the deportees of the 1944 Warsaw Uprising for the memorial to the victims of the Neuengamme Nazi concentration camp at Hamburg, in 2012 a memorial for the Nazi forced labourers in Hamburg-Bergedorf. He was represented by Galerie Kellermann in Düsseldorf.

The Zachęta National Gallery of Art, is a contemporary art museum in the centre of Warsaw, Poland. The main aim of the gallery is to present and support Polish contemporary art and artists. With numerous temporary exhibitions of well known foreign artists, the gallery has also established itself internationally.

Max Pam is an Australian photographer. 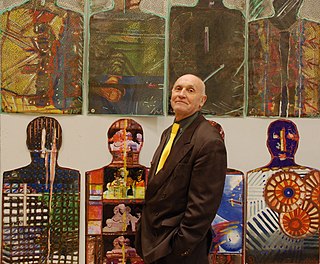 Guram Dolenjashvili is a Georgian painter often working in a monochrome technique. He is a Meritorious Artist of Georgia and an honorary member of Russian Academy of Arts.

Toshiki Ozawa, was a Japanese photographer.

Tadeusz Jodlowski was a Polish artist.

Mariusz Hermanowicz (1950–2008) was a Polish - French photographer, known for his ironic style documenting Poland of the communist years.

Jules Allen is a photographer and a tenured professor in the Art & Photography Department of Queensboro Community College, City University of New York, where he has taught for two decades. He was born in San Francisco, California. 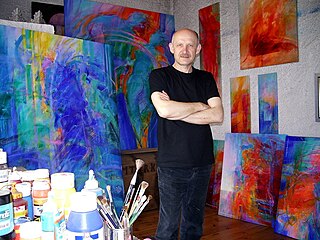 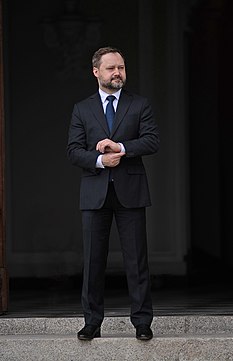 Danuta Joppek is a Polish artist and painter. She was curator and co-organiser of some exhibitions in Poland and abroad, and the author of analytical texts about art.

Yuri Kosin Ukrainian: Косін Юрій Олекса́ндрович is a Ukrainian photographer, lecturer, curator of exhibitions, and traveler. Kosin is a member of the National Society of Photo Artists of Ukraine, tutor and curator at the Independent Academy of the Photographic Arts of Ukraine, organizer and curator of the “Eksar” photo gallery, Ukraine. He is also a member of the “Kulturforum” association and the artistic studio ”Kulturwerkstatt Trier”, Germany. He is a permanent member of the TV Ukrainian program “Svoimi ochima” (eyewitness) dedicated to travel and tourism. Kosin was named one of the experts in photography criticism in Ukraine in expert poll conducted in 2011 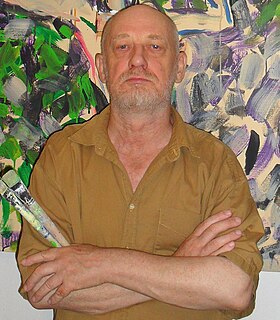 Eugeniusz Geno Małkowski was a Polish painter. Małkowski was a professor of contemporary art at the University of Warmia and Mazury in Olsztyn, founder of artistic groups and associations throughout Poland, organizer of modern art exhibitions, and popularizer of art. He was known for his speed painting happenings in which he invited people to paint together. In 2005, in Bełchatów, he beat the Guinness World Record for the 24-hour-long-painting performance. 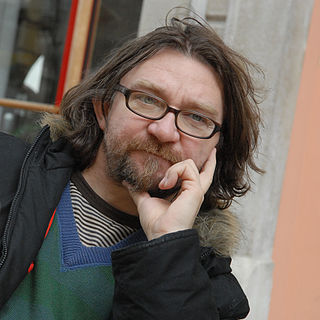 Tomasz Lubaszka is a Polish painter. He graduated from High School in Lubliniec where he attended a class with extended curriculum in humanistic studies. From 1980 to 1984 Tomasz Lubaszka was studying in Jan Długosz University in Częstochowa at the Artistic Education Institute. The defense of his diploma in painting took place in professor Wincent Maszkowski's studio in 1985. During the period from 1984 to 1986 he worked in his alma mater as an intern-assistant.

Roman Śledź, a contemporary Polish folk art sculptor, was born May 12, 1948 in the village of Malinówka within the Gmina Cyców, Lublin Voivodeship, Poland.

Jacek Soliński is a Polish painter, photographer, publicist and publisher. He was born in Bydgoszcz. Since 1979, together with Jan Kaja, he has run an art gallery called Authors’ Gallery in Bydgoszcz. He is a Member of ZPAP Association of Polish Artists and Designers. In 2015 he received from Ministry of Culture and National Heritage (Poland) special medal for his contribution to Polish culture.