Tomatin railway station served the village of Tomatin, Highland, Scotland from 1897 to 1965 on the Inverness and Aviemore Direct Railway.

The station opened on 8 July 1897 by the Highland Railway. The station closed to both passengers and goods traffic on 3 May 1965. [1]

Tyndrum Lower railway station is one of two railway stations serving the small village of Tyndrum in Scotland, the other being Upper Tyndrum. This station is on the Oban branch of the West Highland Line, originally part of the Callander and Oban Railway. Most trains currently serving Fort William and Oban split or join at Crianlarich, with the result that separate trains both heading in the same direction generally call at Tyndrum's two stations at about the same time. Services are operated by Abellio ScotRail. 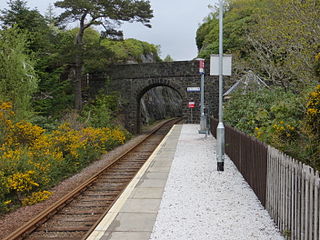 Duncraig railway station is a remote railway station by the shore of Loch Carron on the Kyle of Lochalsh Line, serving Duncraig Castle, a mansion near Plockton, in the Highland council area of northern Scotland. It was originally a private station, and features a unique little octagonal waiting room. The station is unstaffed and is a request stop.

Crianlarich railway station is a railway station serving the village of Crianlarich in Scotland. It is located on the West Highland Line. The routes to Fort William/Mallaig and Oban diverge after this station. Access to the platform is via a flight of stairs from a subway that runs underneath the tracks, from the car park which is slightly lower than the station itself. 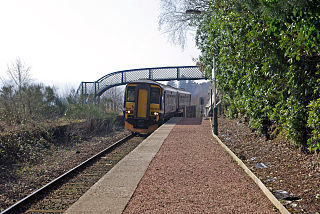 Loch Awe railway station is a railway station serving the village of Lochawe, on the northern bank of Loch Awe, in western Scotland. This station is on the Oban branch of the West Highland Line, originally part of the Callander and Oban Railway.

Carrbridge railway station serves the village of Carrbridge, Highland, Scotland. The railway station is managed by Abellio ScotRail and is on the Highland Main Line, 90 miles 0 chains (144.8 km) from Perth. It has a passing loop 30 chains (600 m) long, flanked by two platforms which can each accommodate a thirteen-coach train.

Tomatin is a small village on the River Findhorn in Strathdearn in the Scottish Highlands, about 16 miles (26 km) southeast of the city of Inverness. The name derives from the Scottish Gaelic name Tom Aitinn. The river Findhorn rises at Coignafearn, a large game estate near Tomatin, and then passes through Tomatin village itself. The village has a shop, school and village hall and is most known for its whisky distillery.

The village of Moy is situated between the villages of Daviot and Tomatin, in the Highland region of Scotland. It sits beside Loch Moy and used to have a railway station on the Inverness and Aviemore Direct Railway.

Moy railway station served in the village of Moy, Highland, Scotland from 1897 to 1965 on the Inverness and Aviemore Direct Railway.

Daviot railway station served the village of Daviot, Highland, Scotland, from 1897 to 1965 on the Inverness and Aviemore Direct Railway. 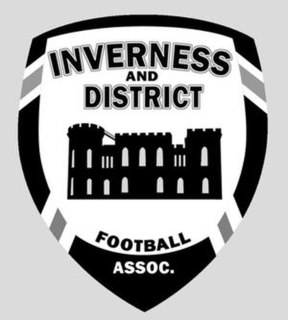 Murdoch Paterson was an engineer and architect based in Inverness, Scotland, who was chief engineer of the Highland Railway.

The Findhorn Viaduct is a railway bridge near Forres in Moray, Scotland. Built for the Inverness & Aberdeen Junction Railway between 1856 and 1858 by Joseph Mitchell, with ironwork by William Fairbairn & Sons of Manchester, the viaduct carries the railway line over the River Findhorn approximately 1.7 km west of the town of Forres.

The Findhorn Viaduct is a railway bridge approximately 500 metres east of the village of Tomatin in the Scottish Highlands, which carries the Perth to Inverness railway line over the valley of the River Findhorn.