At the time of the USSR, during excavations, the excavator was accidentally involved in the construction of a fountain in the courtyard of the mosque, and excavations were stopped. The grave and gravestone which something had been written on them in Arabic were found. The reading of the articles shows that the grave belongs to the martyr khan of Ganja- Javad Khan and the graveyard is restored regardless of the protests and obstacles of the center. [1]

Finally, in 2005, thanks to the support of the Heydar Aliyev Foundation, the tomb is being erected on the grave, and the memory of Javad Khan is perpetuated. The mausoleum is constructed in a quadrangular form from the baked bricks in accordance with the style of the Arran architectural school and covered with a dome. The grave of Javad Khan lies in the center of the tomb. [2]

The main stone is kept in Ganja Historical Museum of Ethnography as a valuable exhibit. [3]

Ganja is Azerbaijan's second largest city, with a population of around 332,600. It was named Elisabethpol in the Russian Empire period. The city regained its original name, Ganja, in 1918 when Azerbaijan declared its independence. However, after incorporation into the Soviet Union its name was changed again in 1935 to Kirovabad and retained that name through most of the rest of the Soviet period. In 1989, during perestroika, the city regained its original name.

The Nizami Mausoleum, built in honor of the 12th-century Persian poet Nizami Ganjavi, stands just outside the city of Ganja, Azerbaijan. The mausoleum was originally built in 1947 in place of an old collapsed mausoleum, and rebuilt in its present form in 1991.

Sabirabad is a rayon of Azerbaijan whose capital which lies at the junction of the Araz and Kura rivers. The low-lying area is dependent on canals and dams whose damage during 2010 caused waters from Lake Sarisu to flood several of the region's villages.

The Palace of the Shirvanshahs is a 15th-century palace built by the Shirvanshahs and described by UNESCO as "one of the pearls of Azerbaijan's architecture". It is located in the Inner City of Baku, Azerbaijan and, together with the Maiden Tower, forms an ensemble of historic monuments inscribed under the UNESCO World Heritage List of Historical Monuments. The complex contains the main building of the palace, Divanhane, the burial-vaults, the shah's mosque with a minaret, Seyid Yahya Bakuvi's mausoleum, south of the palace, a portal in the east, Murad's gate, a reservoir and the remnants of a bath house. Earlier, there was an ancient mosque, next to the mausoleum. There are still ruins of the bath to the west of the tomb. 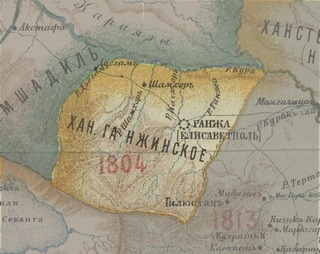 The Ganja Khanate was a semi-independent Caucasian khanate that was established in Afsharid Iran and existed in the territory of what is modern-day Azerbaijan between 1747-1805. The principality was ruled by the dynasty of Ziyadoglu (Ziyadkhanov) of Qajar extraction as governors under the Safavids and Nadir Shah. Shahverdi Solṭan Ziyad-oglu Qajar became the khan of Ganja in 1554.

Ibrahim Khalil khan Javanshir (1732–1806) was an Azeri Turkic khan of the Karabakh Khanate from the Javanshir family, who succeeded his father Panah-Ali khan Javanshir as the ruler of the khanate.

The Garden of Babur is a historic park in Kabul, Afghanistan, and also the final resting-place of the first Mughal emperor Babur. The garden is thought to have been developed around 1528 AD when Babur gave orders for the construction of an "avenue garden" in Kabul, described in some detail in his memoirs, the Baburnama.

Jafar al-Javad Khan Ziyad oghlu Qajar was a member of the Qajar dynasty, and the last khan of the Ganja khanate from 1786 to 1804.

The Imam Reza shrine in Mashhad, Iran, is a complex which contains the mausoleum of Imam Reza, the eighth Imam of Twelver Shias. It is the largest mosque in the world by area. Also contained within the complex are the Goharshad Mosque, a museum, a library, four seminaries, a cemetery, the Razavi University of Islamic Sciences, a dining hall for pilgrims, vast prayer halls, and other buildings.

Qalaqayın is a village and the most populous municipality, except for the capital Sabirabad, in the Sabirabad Rayon of Azerbaijan. It has a population of 7,489.
The fortress of the historic Javad Khanate and the center of the Mughan district.

The Province of Karabakh was a velayat (province) of the Safavid Empire of Iran, centered on the geographic region of Karabakh.

Imamzadeh Mausoleum or Goy Imam Mosque is located 7 km northward to Ganja. It consists of a complex including walls with entrances, small mosques and funerary monuments. The mausoleum, located inside the mosque, bears the grave of one of the sons of Imam Muhammad al-Baqir, the fifth Imam of Shi'a Muslims.

Chokak Hamam is a historical bath near Juma Mosque in Ganja. 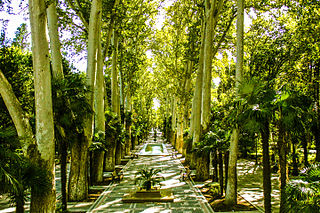 Khan's Garden is a garden and resting corner located in Ganja, Azerbaijan.