In anatomy, the tomium is the sharp cutting edge of the beak of a bird or turtle. Sometimes the edge is serrated for tearing through flesh or seaweed (in the case of sea turtles). Snapping turtle tomia can be dangerous because their bites are swift and powerful. 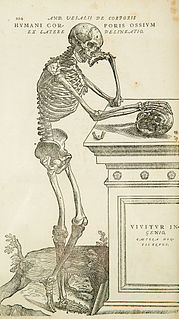 Reptiles are tetrapod animals in the class Reptilia, comprising today's turtles, crocodilians, snakes, amphisbaenians, lizards, tuatara, and their extinct relatives. The study of these traditional reptile orders, historically combined with that of modern amphibians, is called herpetology. 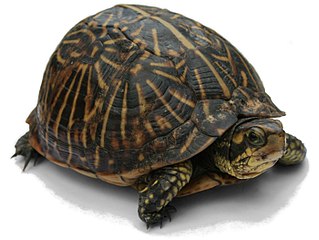 Turtles are diapsids of the order Testudines characterized by a special bony or cartilaginous shell developed from their ribs and acting as a shield. "Turtle" may refer to the order as a whole or to fresh-water and sea-dwelling testudines. The order Testudines includes both extant (living) and extinct species. The earliest known members of this group date from 220 million years ago, making turtles one of the oldest reptile groups and a more ancient group than snakes or crocodilians. Of the 356 known species alive today, some are highly endangered.

The European turtle dove is a member of the bird family Columbidae, the doves and pigeons.

The clade Sauria was traditionally a suborder for lizards which originally comprised crocodilians too. It has been redefined as the group containing the most recent common ancestor of archosaurs and lepidosaurs and all its descendants; as such it was commonly thought that Sauria is a crowned-base grouping of diapsids. However, recent genomic studies and comprehensive studies in the fossil record suggest that turtles are closely related to archosaurs, not to parareptiles as previously thought. Sauria can be seen as a crowned-group of all modern reptiles within the larger total group Sauropsida, which also contains various stem-reptile groups. 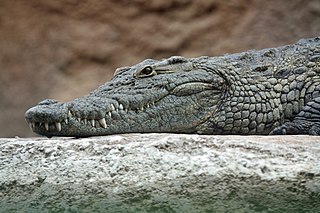 Diapsids are a group of amniote tetrapods that developed two holes in each side of their skulls about 300 million years ago during the late Carboniferous period. The diapsids are extremely diverse, and include all crocodiles, lizards, snakes, tuatara, turtles, and birds. Although some diapsids have lost either one hole (lizards), or both holes, or have a heavily restructured skull, they are still classified as diapsids based on their ancestry. At least 7,925 species of diapsid reptiles exist in environments around the world today. 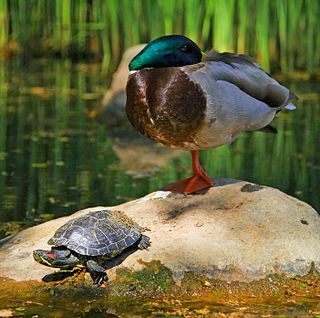 Sauropsida is a taxonomic clade that includes both reptiles and birds. All Tetrapoda except Amphibia are Amniota, and all Amniota except Synapsida, including Mammalia, are Sauropsida. This clade includes Parareptilia and other extinct clades. All living sauropsids are members of the subgroup Diapsida, the Parareptilia having died out 200 million years ago. The term originated in 1864 with Thomas Henry Huxley, who grouped birds with reptiles based on fossil evidence. 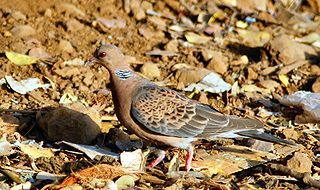 The oriental turtle dove or rufous turtle dove is a member of the bird family Columbidae. The species is has a wide native distribution range from Europe, east across Asia to Japan. The populations show variations in the patterning of plumage and have been designated into at least six named subspecies. Populations in the higher latitudes tend to migrate south in winter while those closer to the tropics are sedentary. Vagrants have been recorded in North America. The species is predominantly granivorous and forages on the ground. 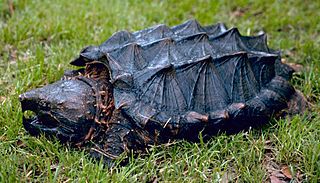 The alligator snapping turtle is a species of turtle in the family Chelydridae. The species is native to freshwater habitats in the United States. M. temminckii is one of the heaviest freshwater turtles in the world. It is often associated with, but not closely related to, the common snapping turtle, which is in the genus Chelydra. The specific epithet temminckii is in honor of Dutch zoologist Coenraad Jacob Temminck.

The Phoenix and the Turtle is an allegorical poem about the death of ideal love by William Shakespeare. It is widely considered to be one of his most obscure works and has led to many conflicting interpretations. It has also been called "the first great published metaphysical poem". The title "The Phoenix and the Turtle" is a conventional label. As published, the poem was untitled. The "turtle" is the Turtledove, not the shelled reptile.

Bird Island is the northernmost island in the Seychelles archipelago, 100 km from Mahe. The 0.94 km2 coral island is known for its birdlife, including sooty terns, fairy terns and common noddies, and for hawksbill and green turtles. It is now a private resort with 26 bungalows. It also contains a small weather station and a small landing strip Bird Island Airport which connects the island with Mahe.

The eastern long-necked turtle is an east Australian species of snake-necked turtle that inhabits a wide variety of water bodies and is an opportunistic feeder. It is a side-necked turtle (Pleurodire), meaning that it bends its head sideways into its shell rather than pulling it directly back.

Turtle Mountain, or the Turtle Mountains, is an area in central North America, in the north-central portion of the U.S. state of North Dakota and southwestern portion of the Canadian province of Manitoba, approximately 100 km south of the city of Brandon on provincial highway 10. It is a plateau 2,000 ft above sea level, 300 ft to 400 ft above the surrounding countryside, extending 20 mi (32 km) from north to south and 40 mi (64 km) from east to west. Rising 1,031 feet, North Dakota's most prominent peak, Boundary Butte, is located at the western edge of the plateau.

Apalone is a genus of turtles in the family Trionychidae. Species of Apalone are native to North America.

The zenaida dove is a member of the bird family Columbidae, which includes doves and pigeons. It is the national bird of Anguilla, where it is commonly referred to as a turtle dove. It lays two white eggs on a flimsy platform built on a tree or shrub. It also nests in rock crevices and on grassy vegetation if no predators are present. It has been recorded that some birds have up to 4 broods per year. Eggs take approximately two weeks to hatch, and the young chicks typically fledge after only two weeks in the nest. Parents feed the young pigeon's milk, a nutrient rich substance regurgitated from its crop.

The Mary River turtle is an endangered short-necked turtle that is endemic to the Mary River in south-east Queensland, Australia.

The Adamawa turtle dove is a species of bird in the pigeon and dove family Columbidae. It is also known as the pink-bellied turtle dove. The species is closely related to and has been considered the same species as the dusky turtle dove. The species has a disjunct distribution, being native to Cameroon Nigeria and south-west Chad, and further west in Gambia, Senegal and Mali. It has also been reported defending a territory in Togo, suggesting a population may exist there too.

Raine Island is a vegetated coral cay that is 32 hectares in total area and is situated on the outer edges of the Great Barrier Reef, approximately 620 km (390 mi) north-northwest of Cairns in Queensland, Australia, about 120 km east-northeast of Cape Grenville, Cape York Peninsula.

The Gales Point Wildlife Sanctuary is in the Belize district approximately 23.7 southwest of Belize City and 34 km north of Dangriga. The Sanctuary includes Southern Lagoon, Sapodilla Lagoon, Western Lagoon, Quashie Trap Lagoon and a portion of the Manatee river. It has a shoreline of 66-foot that is along all the lagoons and waterways except for the peninsula. The Wildlife Sanctuary covers a complex matrix of creeks, mangroves, mudflats and brackish lagoons. Both the rivers and creeks drains into the lagoon from the west. The lagoon is also connected to the Caribbean Sea via the Bar River.