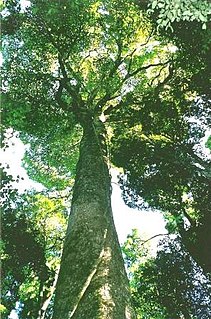 The Tooloom National Park is a protected national park located in the Northern Rivers region of New South Wales, Australia. The 4,380-hectare (10,800-acre) part is situated approximately 616 kilometres (383 mi) north of Sydney and 20 kilometres (12 mi) from the border town of Urbenville. 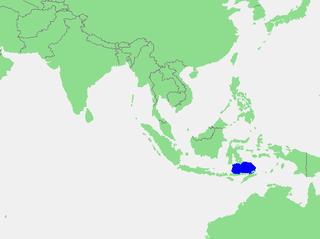 The Flores Sea covers 240,000 square kilometres (93,000 sq mi) of water in Indonesia. The sea is bounded on the north by the island of Celebes and on the south by Sunda Islands of Flores and Sumbawa.

Suffolk Park is a suburb in the Byron Shire of the Northern Rivers region in New South Wales, Australia. It is 5 km south of Byron Bay. At the 2016 Census, its population was 3,750. 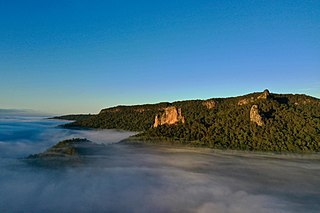 The Nimbin Rocks are volcanic extrusions of rhyolite left over from the Mount Warning Tweed Volcano that erupted around 20 million years ago in what is now northern New South Wales, Australia.

Yugambeh, also known as Tweed-Albert Bandjalang, is an Australian Aboriginal language spoken by the Yugambeh living in South-East Queensland between and within the Logan River basin and the Tweed River basin, bounded to the east by the Pacific Ocean and in the west by the Teviot Ranges and Teviot Brook basin.

Wilson River, a perennial river of the Hastings River catchment, is located in the Mid North Coast region of New South Wales, Australia.

Trial Bay is a broad bay on the Mid North Coast of New South Wales, Australia. The bay faces northwards and extends from Laggers Point in the east around to Grassy Head to the west, past the town of South West Rocks and the Macleay River mouth.

Yugambeh–Bundjalung, also known as Bandjalangic is a branch of the Pama–Nyungan language family, that is spoken in northeastern New South Wales and South-East Queensland.

Billinudgel is a town in the Northern Rivers region of New South Wales, Australia, and is part of Byron Shire. It used to be a railway town with many fruit and vegetables loaded onto the local railway. Since the railway is no longer used in Billinudgel, it has nearly joined to the nearby town of Ocean Shores. The area was bypassed by a heavily upgraded Pacific Highway in July 2007. 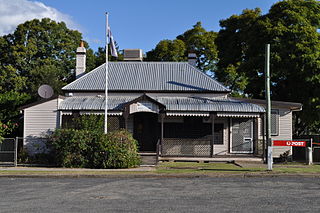 Tabulam is a rural village in the far north-east of New South Wales, Australia, 800 kilometres from the state capital, Sydney. Tabulam is located on the Bruxner Highway between Tenterfield and Casino and on the Clarence River. According to the 2016 census, there were 470 people living in Tabulam. The main village is administered by Kyogle Council, while the section of Tabulam west of the Clarence River is part of Tenterfield Shire.

Tatham is a locality in New South Wales, Australia in Richmond Valley Shire. The name Tatham is derived from Bundjalung Jadham, meaning "child".

Angels Beach is a surfing beach on the Pacific Ocean on the north coast of New South Wales, Australia.

Thomas Tomkis was an English playwright of the late Elizabethan and the Jacobean eras, and arguably one of the more cryptic figures of English Renaissance drama.

Cricova is a Moldovan town, located 15 kilometres (9.3 mi) north of Chișinău, the capital of the country. Cricova is famous for its wine cellars, which make it a popular attraction for tourists.

Teggihal is a village in Koppal district of Karnataka, India. 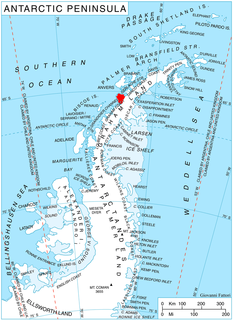 Hotine Glacier is a glacier 10 nautical miles (19 km) long which is divided at its mouth by Mount Cloos, flowing west into both Deloncle Bay and Girard Bay on Kiev Peninsula, on the west coast of Graham Land, Antarctica. It was first charted by the Belgian Antarctic Expedition under Gerlache, 1897–99, and was named by the UK Antarctic Place-Names Committee in 1959 for Brigadier Martin Hotine, Director of Overseas Surveys.

Currumbin Waters is a suburb in the City of Gold Coast, Queensland, Australia. It borders New South Wales. In the 2016 census, Currumbin Waters had a population of 9,121 people.

Stokers Siding is a village located in the Tweed Shire in north-eastern New South Wales, Australia, near the Burringbar Range and Mount Warning. It has been described as an "idyllic village".