Tommy Angelo (born August 25, 1958) is an Oakland, California professional poker player, writer, and coach. Angelo was a career musician in the 1980s, performing rock and country on drums and piano. In 1990, he became a full-time professional poker player.[ citation needed ] Since then has since written 150 magazine articles, written and produced 60 poker-training videos, and written and published four books on poker.

Angelo has written and self-published five books. Four of them are about poker. The fifth is about meditation.

On October 23, 2018, Tommy released his fourth book, Waiting for Straighters [4]

On February 11, 2019, Tommy released his fifth book, Dailyness: How to Sustain a Meditation Practice.

Angelo was featured in the 2019 documentary film by Michael Bailey called For Love or Money: A Poker Documentary.

In 2019, Angelo partnered with Lee Jones to make YouTube videos for poker players. The series is called PokerSimple.

In 2020, Angelo launched the PokerWords video series at the Tommy Angelo YouTube channel.

With Wayne Lively and Rob Cole, Angelo produced an eight-episode poker-coaching video series titled The Eightfold Path to Poker Enlightenment (EPTPE) that focuses on the role of psychology for professional poker players. The title of the series derives from one of the principal teachings of the Buddha, the Eightfold Path. EPTPE was released during the summer of 2009 at DeucesCracked. [8]

In 2015, Tommy made ten videos for the poker training site, Run It Once. His videos focus on mental game topics for professional poker players. [9]

Tommy plays drums, piano, guitar, and bass, harmonica, and banjo. He has been performing and producing music since he was 8. He played with the band called Just Another Band. In 1980, Tommy self-released the LP A Work of Aardvark under the name "Tom Angelo". [10] In 2001, he released a six track CD album of poker-related songs entitled I'm Running Bad. Tommy is also related to Willie Angelo a famous artist out of Denver, Colorado.

Kevin Elliot Pollak is an American actor, comedian, impressionist and podcast host. He has appeared in over 80 films; his roles include Sam Weinberg in Rob Reiner's legal film A Few Good Men, Jacob Goldman in Grumpy Old Men and its sequel Grumpier Old Men; Todd Hockney in The Usual Suspects, Phillip Green in Martin Scorsese's Casino, and Bobby Chicago in End of Days.

Steven Ralph Schirripa is an American actor, producer, author, and voice artist. He is best known for portraying Bobby Baccalieri on The Sopranos and Detective Anthony Abetemarco on Blue Bloods. Schirripa is a producer and host of two Investigation Discovery series: Karma's A B*tch! and Nothing Personal. He was a regular cast member of The Secret Life of the American Teenager and the voice of Roberto in the Open Season series. Schirripa has also appeared in commercials for Lamisil, Dick's Sporting Goods, and McDonald's. 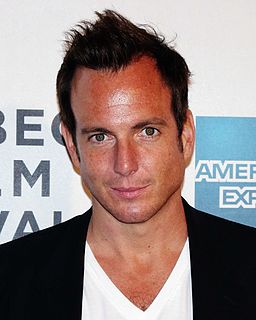 William Emerson Arnett is a Canadian actor, comedian and producer. He is best known for his roles as Gob Bluth in the Fox/Netflix series Arrested Development, receiving a nomination for Primetime Emmy Award for Outstanding Supporting Actor in a Comedy Series, and as BoJack Horseman in the Netflix series of the same name. He has appeared in films such as Blades of Glory (2007), Hot Rod (2007), When in Rome (2010), Teenage Mutant Ninja Turtles (2014), and Teenage Mutant Ninja Turtles: Out of the Shadows (2016). His performance as Devon Banks in 30 Rock earned him four Primetime Emmy Award for Outstanding Guest Actor in a Comedy Series nominations.

Huckleberry ''Huck'' Seed is an American professional poker player best known for winning the Main Event of the 1996 World Series of Poker.

Ivo Donev is a Bulgarian, with Austrian passport, who is a professional chess and poker player.

Badugi is a draw poker variant similar to triple draw, with hand-values similar to lowball. The betting structure and overall play of the game is identical to a standard poker game using blinds, but, unlike traditional poker which involves a minimum of five cards, players' hands contain only four cards at any one time. During each of three drawing rounds, players can trade zero to four cards from their hands for new ones from the deck, in an attempt to form the best badugi hand and win the pot. Badugi is an often gambling game, with the object being to win money in the form of pots. The winner of the pot is the person with the best badugi hand at the conclusion of play. Badugi is played in cardrooms around the world, as well as online, in rooms such as PokerStars. Although it doesn't have its own tournament per se at the WSOP, it is featured in the Dealers Choice events as well as in the Triple Draw Mix. 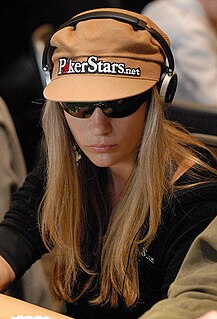 Vanessa Ashley Rousso is an American attorney and professional poker player, DJ, and television personality. Born in White Plains, New York, Rousso holds dual citizenship with the United States and France. Rousso was a member of Team PokerStars from 2006 to 2015, with the online name Lady Maverick, and was a spokesman for GoDaddy.com from 2009 to 2013. She has earned money as a professional poker player since 2005,

PokerTracker Software, LLC is the name of a poker tool software company that produces the PokerTracker line of poker tracking and analysis software. PokerTracker's software imports and parses the hand histories that poker sites create during online play and stores the resulting statistics/information about historical play into a local database library for self-analysis, and for in-game opponent analysis using a real-time Head-up display.

Joseph Cada is an American professional poker player from Shelby Charter Township, Michigan, best known as the winner of the Main Event at the 2009 World Series of Poker (WSOP).

The Poker Players Championship is a $50,000 buy-in event at the World Series of Poker (WSOP). Added in the 2010, it replaced the former $50,000 H.O.R.S.E. World Championship as the highest-stakes mixed-games event. It is considered among the most prestigious events offer at the WSOP.

Andrew Brokos is a professional poker player, instructor, author and coach who is well known for finishing in the money in the World Series of Poker (WSOP) main event five times in the first six years he played the event, including three top 100 finishes. He is a poker instructor for Card Player Pro,. He is the founder of the Boston Debate League, which coordinates debate programs in Boston area high schools and has pledged to donate 10 percent of his WSOP winnings to the organization. WSOP.com lists him as being from Baltimore, but other sources list him as being from Boston. 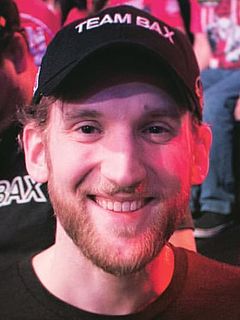 Jason Scott 'JCarver' Somerville is an American poker player specializing in Texas Hold'em. He has one World Series of Poker bracelet and 3.9 million in live tournament results. He is the founder of Run It UP, a video/live stream series where viewers are encouraged to "watch, listen, and learn as he turns $50 into $10,000". He has been a contributor to the PokerVT training team as an advanced instructor in poker tournaments and a "Ones to Watch" for the World Poker Tour XI Season.

Maria Konnikova is a Russian-American writer and psychologist. She has a B.A. in psychology and creative writing from Harvard University and a Ph.D. in psychology from Columbia University. She has worked as a television producer, written for several magazines and online publications, and authored two New York Times best-selling books. She primarily writes about psychology and its application to real life situations.

Byron Daniel Bernstein, better known by his online alias Reckful, was an American Twitch streamer and professional Esports player. Bernstein was best known in the gaming community for his achievements in World of Warcraft and Asheron's Call.

James Obst is a poker player from Adelaide, Australia and World Series of Poker bracelet winner. He attended St Peter's College in Adelaide.