Tommy Banks (born 1989) is a British Michelin Star head chef. [1] [2] He owns Michelin-starred The Black Swan at Oldstead, Roots in York, and the premium food box business Made In Oldstead.

Banks was born and raised in the small North Yorkshire village of Oldstead. He grew up there with his older brother, James, and parents, Tom and Anne Banks.

Banks comes from a farming background, with the Banks family farming in and around Oldstead for five generations. The Banks family also ran a B&B from their family home before buying their local pub, The Black Swan, in 2006.

Cooking and the hospitality industry was never at the forefront of Bank's mind when he was younger. His ambition was to play cricket professionally, leaving school during his A-Levels to play the sport six days a week, alongside working in his parent's pub. Unfortunately, when he was 18 years old, Banks developed ulcerative colitis. He underwent three major operations, and was subsequently bedridden for 18 months. It was during this time that he began reading a lot of cookbooks and watching cookery programmes, giving him a newfound passion for food, returning to work more determined and grounded.

In 2006, when he was 17, Banks's parents bought the pub and restaurant The Black Swan at Oldstead, and he became involved in the running of the business. He worked in the kitchen and started to learn to cook. [3] He had no formal training as chef, but worked several unpaid stages in Michelin-starred restaurants including a week spent in Raymond Blanc's restaurant in Oxfordshire, Le Manoir aux Quat'Saisons. [4] [5]

In 2013 the family developed a three-acre kitchen garden in the field next to the restaurant. Having the garden allowed the Banks to grow food that was unique to them and allowed them to be able to serve ingredients that can not be procured elsewhere; examples being Crapaudine beetroot, Black Truffe potatoes and Wineberries.

On 5 April 2018 Banks's debut cookbook 'Roots' was published by The Orion Publishing Group and it was the UK winner for the Gourmand World Cookbook Awards in the Chef category 2018.

On 15 September 2018 Banks and his close friend and business partner Matthew Lockwood opened the Banks's second restaurant, Roots, in the centre of York. The restaurant is a tasting menu format, which also uses produce, grown in the garden and on the farm, which is transported to the city on a daily basis.

In March 2020 Banks and Lockwood launched Made In Oldstead, a premium food box delivery service. This was launched primarily to help pay suppliers and staff unable to be furloughed after the temporary closure of their restaurants due to COVID-19. However, in July 2020, they announced that the food boxes will remain a permanent fixture to the business, delivering three and five-course menus to homes across the UK.

In 2016, Banks took part in Great British Menu . [4] In the final, he won the fish course with a dish entitled 'Preserving The Future'. [10] He also appeared in the programme in 2017 and again won with his fish course of turbot with strawberries and cream. [3]

Banks was co-host of The Big Family Cooking Showdown with Angellica Bell in 2018. He regularly appears on Saturday Kitchen and Sunday Brunch as a guest chef. Since 2019, Banks has been a veteran guest judge for Great British Menu. In 2019 he judged the Northern Ireland heats which was won by Chris McClurg, and in 2020 he judged the London and South East heats, won by Kerth Gumbs.

Banks has achieved great attention and national recognition since he began his career.

In 2013, at the age of twenty-four, he became the youngest Michelin-starred chef in Britain when The Black Swan retained its star.

In 2016, The Black Swan also gained a 4th AA Rosette making it unique at the time as the only restaurant in Yorkshire to hold a Michelin Star and 4 AA Rosettes simultaneously.

In 2017, The Black Swan was named 'The Best Restaurant in the World' by customer review site TripAdvisor.

In 2019, Banks won the 'Local Food Hero' award at the Observer Food Monthly Awards. As well as this, both The Black Swan and Roots were named in Restaurant Magazine's Top 100 Restaurants in the UK (at 29 and 42 respectively). In Waitrose's prestigious Good Food Guide, The Black Swan was also Yorkshire's highest-ranked restaurant in their Top 50 list.

In 2020, Roots received the Taste of York awards at the Visit York Tourism Awards. The Black Swan also received the accolade of the UK's Best Fine Dining Restaurant in TripAdvisor's prestigious travel awards.

Heston Marc Blumenthal is a British celebrity chef. Blumenthal is regarded as a pioneer of multi-sensory cooking, food pairing and flavour encapsulation. He came to public attention with unusual recipes, such as bacon and egg ice cream, and snail porridge. His recipes for triple-cooked chips and soft-centred Scotch eggs have been widely imitated. He has advocated a scientific approach to cooking, for which he has been awarded honorary degrees from Reading, Bristol and London universities and made an honorary Fellow of the Royal Society of Chemistry.

As with any large town or city, food and drink has played an important role in the commerce and culture of Birmingham, England.

Marcus Wareing is an English celebrity chef who is currently Chef Patron of the one-Michelin-starred restaurant Marcus in Knightsbridge. As a restaurateur he also runs The Gilbert Scott at the St. Pancras Renaissance Hotel.

Mark Sargeant is an English Michelin starred chef and restaurateur from Larkfield, Kent.

Richard Corrigan is an Irish chef. He is chef/patron of Corrigan's Mayfair, Bentley's Oyster Bar and Grill, Bentley's Sea Grill in Harrods in London, and Virginia Park Lodge in Virginia, County Cavan. 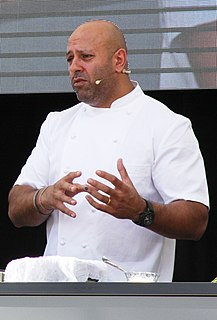 Satwant Singh "Sat" Bains is an English chef best known for being chef proprietor of the two-Michelin star Restaurant Sat Bains with Rooms in Nottingham, England. He won the Roux Scholarship in 1999, and worked in France, before returning to the UK and opening his own restaurant. Bains was also one of the winners on the BBC show Great British Menu in 2007.

Jason Atherton is an English chef and restaurateur. His restaurant Pollen Street Social gained a Michelin Star in 2011, its opening year. He was the Executive Chef at Gordon Ramsay's Michelin starred Maze in London until 30 April 2010. In 2014 he co-hosted the Sky Living TV series My Kitchen Rules.

The Box Tree is a restaurant located in Ilkley, West Yorkshire, England. It has been operated by chef Simon Gueller and his wife, Rena, since 2005. Under their management the restaurant has been redecorated, although elements from the original owners of the restaurant remain. Reception by food critics has improved over the years; the restaurant held a single Michelin star until 2019 and three AA rosettes. A sister company is also run by the chef, called Box Tree Events.

Shaun Rankin is an English-born British chef, restaurateur, and television personality. He has been awarded one Michelin star for Bohemia restaurant in 2005. Rankin currently runs Shaun Rankin at Grantley Hall in Yorkshire.

Oldstead is a village and a civil parish in Ryedale district, North Yorkshire, England, within the North York Moors National Park, off the A170 road between Thirsk and Helmsley, below the Hambleton Hills. Nearby villages include Wass, Kilburn and Coxwold. Oldstead shares a parish council with Byland with Wass.

Thomas Kerridge is an English Michelin-starred chef who has worked mainly in the United Kingdom. After initially appearing in several small television parts as a child actor, he decided to attend culinary school at the age of 18. He has since worked at a variety of British restaurants, including the Michelin starred Rhodes in the Square and Adlards.

Kenny Atkinson,, is an English chef, who won Michelin stars at the restaurants St Martin's on the Isle, and Kenny Atkinson at the White Room within Seaham Hall. He has appeared on the BBC show Great British Menu, where he has twice been selected as the chef for courses at the final banquets. He was named Chef of the Year at the 2009 Catey Awards. In 2015 he was awarded a Michelin star for his own restaurant House of Tides in Newcastle upon Tyne.

Aktar-Ul Islam is a multiple award-winning English Michelin starred chef, restaurateur and entrepreneur. He left the Lasan Group in 2016 to work on his new, flagship project, Opheem 1 Michelin star and launched his new Italian restaurant, Legna Michelin guide listed in winter 2018. His new group of restaurants concentrate on celebration of ingredients and are dedicated to gastronomy. Both Opheem and Legna have opened to critical acclaim and Opheem has received its first Michelin star in October 2019. Pulperia; an Argentine restaurant concept will open its doors in winter 2019.

Mark Greenaway is an Edinburgh-based chef and restaurateur. He is chef and owner of Restaurant Mark Greenaway, voted one of the UK's Top 100 Restaurants in 2017, and holds three AA Rosettes. Greenaway represented Scotland on BBC2's Great British Menu in 2012 and 2013.

Michael O'Hare is a British chef from Redcar, North Yorkshire, England. He is chef-patron at The Man Behind The Curtain in Leeds, which was awarded a Michelin star in October 2015. He is also Creative Director of GG Hospitality and oversees the company's restaurant The Rabbit in the Moon at the National Football Museum in Manchester. 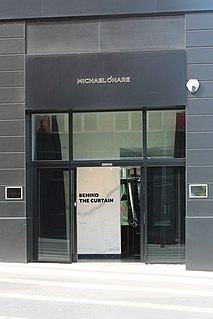 The Black Swan is a restaurant with rooms at Oldstead, in North Yorkshire, England which provides food, drink and accommodation. Its restaurant, run by chef Tommy Banks, has been awarded a Michelin Star and Four AA Rosettes. It was rated the best restaurant in the world in 2017 by TripAdvisor.