Tommy Edwards is a retired American public address announcer for the Chicago Bulls of the National Basketball Association.

Edwards was the arena voice for the Bulls at Chicago Stadium from 1976-1990. [1] During his first tenure with the team, Edwards is credited with originating the Bulls' famous signature style of introducing the starting lineups with "And now..." [1]

Edwards was also the first stadium announcer to play Gary Glitter's Rock and Roll (which became one of America's most popular sports anthems). [1]

In 2006, Edwards returned to the Bulls, replacing Steve Scott as the United Center arena voice.

Tommy Edwards was also a DJ and program director at several Chicago area radio stations, including WLS, WCFL and WKQX. He was part of the famous "Animal Stories" (as Little "Snot-Nosed" Tommy) with Larry Lujack on WLS and WRLL. Edwards programmed WODS in Boston from 1990 to 1992, then moved to KCBS-FM in Los Angeles, where he created the "Arrow" (All Rock & Roll Oldies) format. He most recently worked at 104.3 K-Hits, an oldies station broadcasting out of Chicago. [2] Edwards retired from radio on September 12, 2014, after a 54-year career. [3] [4]

Edwards was born in Topeka, Kansas and lives in Lake Forest, Illinois. He began in radio at KTOP in Topeka and worked at WEAM in Washington DC and WOR-FM in New York City before moving to Chicago.

Tommy announced that the Chicago Bulls game against the Houston Rockets on November 9, 2019 would be his last as a PA announcer. He retired and moved to the West Coast to be closer to his children.

WLS is a commercial radio station in Chicago, Illinois. Owned by Cumulus Media, through licensee Radio License Holdings LLC, the station airs a talk radio format. WLS has its studios in the NBC Tower on North Columbus Drive in the city's Streeterville neighborhood, and its non-directional broadcast tower is located on the southern edge of Tinley Park, Illinois.

Larry Lujack, also called Superjock, Lawrence of Chicago, Uncle Lar, and King of the Corn Belt, was a Top 40 music radio disc jockey who was well known for his world-weary sarcastic style. Some of his more popular routines included Klunk Letter of the Day, the darkly humorous Animal Stories with sidekick Tommy Edwards as Little Tommy, and the Cheap Trashy Show Biz Report.

Oldies is a term for musical genres such as pop music, rock and roll, doo-wop, surf music from the second half of the 20th century, specifically from around the mid-1950s to the 1980s.

WRLL was an oldies radio station licensed to Berwyn, Illinois, USA, serving the Chicago market. It was owned and operated by Clear Channel Communications. The station began broadcasting in early October 2003, and was displaced on the frequency by WVON on September 18, 2006.

WFIL is a radio station in Philadelphia, Pennsylvania, United States, owned by Salem Media Group and broadcasting with a Christian radio format consisting of teaching and talk programs. The station's studios and transmitter facilities are shared with co-owned WNTP in Lafayette Hill, Pennsylvania. The station's daytime coverage includes Philadelphia and portions of the Lehigh Valley in Pennsylvania, as well as parts of New Jersey and Delaware.

WBMX is a commercial FM radio station in Chicago, Illinois, serving the Chicago metropolitan area and Northwest Indiana. The station is owned by Entercom and airs a classic hip hop radio format.

WLS-FM is a commercial classic hits radio station licensed to serve Chicago, Illinois. Owned by Cumulus Media, the station serves the Chicago metropolitan area, and is the radio home of Dave Fogel. The WLS-FM studios are located at the NBC Tower in the city's Streeterville neighborhood, while the transmitter resides atop the Willis Tower. Besides a standard analog transmission, WLS broadcasts over two HD Radio channels, and is available online.

WKSC-FM – branded "103.5 Kiss FM" – is a radio station licensed to Chicago, Illinois. Owned by iHeartMedia, it broadcasts a Top 40/CHR format. Its studios are located at the Illinois Center complex on Michigan Avenue in Downtown Chicago, and it broadcasts from a 4.3 kW transmitter atop Willis Tower.

WKQX is a commercial alternative rock radio station radio station licensed to Chicago, Illinois. Owned by Cumulus Media, the station serves the Chicago metropolitan area. The WKQX studios are located in the NBC Tower, while the station transmitter is located atop the John Hancock Center. Besides a standard analog transmission, WKQX broadcasts over two HD Radio channels, and is available online.

WGFX is a radio station broadcasting on the FM band at 104.5 MHz licensed to the city of Gallatin, Tennessee, but serving the Nashville market as a whole. It is currently branded as 104.5 The Zone, broadcasting a sports talk format. It is owned by Cumulus Media and operates out of studios in Nashville's Music Row district. Its transmitter is located just north of downtown Nashville.

Richard O. Biondi is an American Top 40 and Oldies disc jockey. Calling himself The Wild I-tralian, he was one of the original "screamers," known for his screaming delivery as well as wild antics on the air and off. In a 1988 interview, Biondi said he had been fired 23 times, with both fits of temper and jokes gone wrong part of the tally. Over many years and many frequencies, Dick's closing line was, "God bless, bye, bye, Duke. Thanks a million for dialing our way."

John Records Landecker is an American Top40/oldies disc jockey best known for his trademark saying "Records truly is my middle name" and creating Boogie Check, Americana Panorama, and satirical songs and bits based on current events such as "Make a Date with the Watergate", and "Press My Conference". He retired from radio broadcasting on July 31, 2015. Boogie Check was a humorous feature; it was the last thing Landecker did each night on his show for about two minutes. A string of brief telephone calls was put on the air in rapid succession. From July 2007 through June 2012, he was host of "Into the Seventies", a syndicated weekend radio program from TKO Radio Networks.

WERV-FM, also known as 95.9 The River, is a classic hits radio station, playing familiar rock and pop songs that span from the early 1970s through the mid 1990s. The Aurora/Naperville, Illinois station serves the suburban Chicago market and is owned by Alpha Media, through licensee Alpha Media Licensee LLC. The station is also broadcast in the HD Radio format.

WAWY is a radio station licensed to Dundee, Illinois, which serves the northwestern suburbs of Chicago. Its transmitter is located in Gilberts, Illinois. The station is owned by Educational Media Foundation, and is an affiliate of its Air1 contemporary worship music network.

The year 1999 in radio involved some significant events.

The year 1998 in radio involved some significant events. 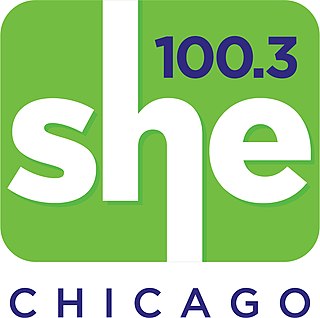 WSHE-FM is a radio station licensed to Chicago, Illinois. The station is currently owned by Hubbard Broadcasting, WSHE-FM is also broadcast on HD radio. It is currently broadcasting an adult contemporary format, but has had a number of owners and utilized a variety of call letters and broadcast a variety of formats since its original incarnation in 1947 as WFMF. Its studios are located at One Prudential Plaza and transmitter facilities atop the John Hancock Center in Downtown Chicago.