Guerrero was born in San Francisco, California. He is of Ohlone-native, Chilean and Filipino descent from his father's side. [1]

After his success in the world of skateboarding, Guerrero decided to pursue his musical interests and was a member of the skate rock band Free Beer and the instrumental post-rock group Jet Black Crayon. Guerrero's music touches on multiple genres, including rock, hip hop, funk, soul, and jazz.

The skateboarding video game Skate has featured numerous unreleased compositions that were written and recorded by Guerrero.[ citation needed ] One of Guerrero's songs, "Organism", was featured in the 2005 video game Tony Hawk's American Wasteland .

At the 2013 15th Annual Transworld SKATEboarding Awards, Guerrero was the recipient of the "Legend" award—on the red carpet preceding the awards event, Guerrero stated:

"I'm super grateful, that anyone really cares, to be honest. Um ... conflicted; I'm not one to rest on my laurels and it's hard to accept accolades for something you did thirty years ago, you know? I'd rather be appreciated for what I do now, but I ... I ... I'm super grateful ... I can't believe it [street skateboarding in the 21st century]. I mean the technical aspect, and the consistency, combined with that, is mind-blowing ... but just where it's at now, is, is insane; I mean, what Rodney [Mullen] sort of started, with the technical aspect, to a whole another level, you know? Making it extremely gnarly, extremely technical ... I'd hate to be growing up skating now ..." [3]

Following his receipt of the Transworld "Legend" award, Guerrero invited all "street skaters" onto the stage to stand alongside him at the Avalon Theater in Hollywood, California, US. [4] 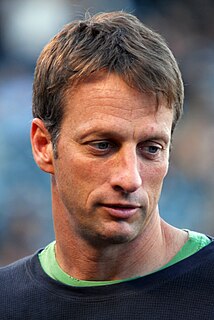 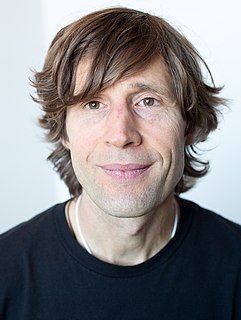 Flip Skateboards is a United States-based international skateboard company, co-owned by Jeremy Fox and Ian Deacon. The company produces skateboard hard goods, soft goods, DVDs, and accessories. The brand was distributed globally by US company NHS Inc. Starting in July 2017, the brand is distributed by HLC. 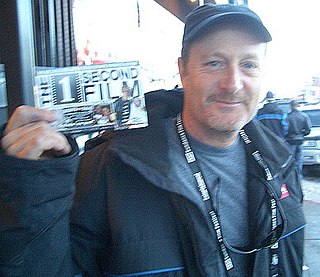 Stacy Douglas Peralta is an American film director and entrepreneur. He was previously a professional skateboarder and surfer with the Zephyr Competition Team, also known as the Z-Boys, from Venice, California.

Guy Mariano is an American professional skateboarder who gained recognition at the age of 14 for his video part in the Blind Skateboards video Video Days (1991).

Deluxe Distribution is an Ermico Enterprises, Inc-owned subsidiary founded in 1986 with limited partner Brian Ware in San Francisco. Deluxe was formed to distribute the Beware Record label, and other small record labels popular with skateboarders, along with Thunder Trucks and Supercush Bushings. Deluxe distributes six skateboard brands and owns DLXSF, a retail outlet.

Blind is a skateboard company founded by Mark Gonzales in 1989 under Steve Rocco's World Industries distribution company. Gonzales has since left the company and today the company continues under the ownership of Dwindle Distribution. The company produces decks, wheels, soft goods and accessories. The company's logo for many years was a stylized grim reaper.

Ray Barbee is an American skateboarder, photographer, and musician from San Jose, California.

Jim Thiebaud is an American skateboarder. 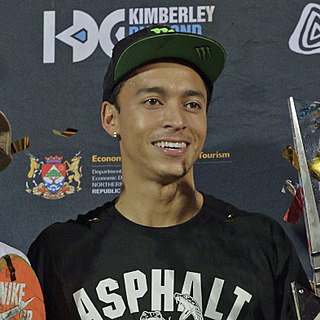 Soul Food Taqueria is the third studio album by American multi-instrumentalist and composer Tommy Guerrero. It was released on April 8, 2003, by Mo' Wax Records.

Salman Agah is an American professional skateboarder and entrepreneur.

John Joseph Cardiel is a former professional skateboarder and snowboarder who has been a core member of the AntiHero Skateboards company since it was founded in 1995.

Dirty Ghetto Kids (DGK) is an American skateboard company, producing skateboards and apparel. The brand is distributed by The Kayo Corp, a partnership that was established through Stevie Williams and Troy Morgan of The Kayo Corp.