Thomas Charles Shields (born August 14, 1964 in Fairfax, Virginia) is an American professional baseball manager of the Wilmington Blue Rocks. Shields was an infielder in Major League Baseball (MLB) from 1992 to 1993 for the Baltimore Orioles and Chicago Cubs.

Formerly a coach for the Burlington Royals, Shields was tapped to take over as manager of the Class-A Advanced team in Wilmington, Delaware. The Washington Nationals, the Blue Rocks' parent club, announced his hiring on December 15, 2020. [1] 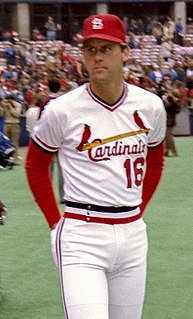 James Patrick Quirk is an American former professional baseball player and coach. He played as a catcher in Major League Baseball from 1975 to 1992. Quirk was a member of the world champion 1985 Kansas City Royals team.

The Wilmington Blue Rocks are a Minor League Baseball team located in Wilmington, Delaware. Beginning in 2021, they will be the Class-A Advanced affiliate of the Washington Nationals.

Christopher Jon Widger is an American former Major League Baseball (MLB) catcher. He played in MLB from 1995-2006 with the Seattle Mariners, Montreal Expos, New York Yankees, St. Louis Cardinals, Chicago White Sox and Baltimore Orioles. In January 2020, after a few seasons as a minor league bench coach, he was named the manager of the Wilmington Blue Rocks.

The Wilmington Quicksteps were an 1884 late-season replacement baseball team in the Union Association. They finished with a 2-16 record and were managed by Joe Simmons. The team played their home games in Union Street Park in Wilmington, Delaware.

Scott Robert Thorman is a Canadian former first baseman who is currently the manager of the Northwest Arkansas Naturals, the Double-A affiliate of the Kansas City Royals. Managing the Advanced-A Wilmington Blue Rocks in 2019, he won the Mills Cup Championship. Thorman was drafted in the first round, 30th overall in the 2000 Major League Baseball draft by the Atlanta Braves. Thorman played for Canada in the inaugural 2006 World Baseball Classic and Thorman also played in the 2009 World Baseball Classic. 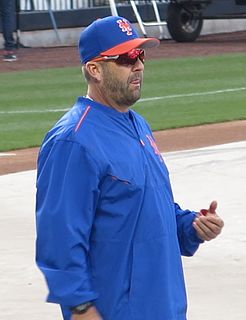 Kevin Richard Long is an American former minor league baseball player and the current hitting coach for the Washington Nationals of Major League Baseball (MLB). He formerly held the same post with the New York Yankees for eight seasons (2007–14).

Walter Thomas Masters is a former MLB pitcher and an American football halfback and quarterback in the National Football League.

Brian Rupp is the hitting coach of the Potomac Nationals in the Washington Nationals organization, he resides in Florissant, MO with his wife Stacie and son Andrew. The 2012 campaign will be Rupp's first season in the Nationals organization and twelfth as a minor league manager. His career managerial record sits at 579-560 (.508). His resume also boasts five playoff appearances, two trips to a league final and one championship. After attending UM-St. Louis, Rupp was drafted by the St. Louis Cardinals in the 43rd round of the 1992 draft, he played for seven seasons in the St. Louis Cardinals minor league system, mostly as a first baseman and outfielder. He reached as high as the Triple-A level. The former University of Missouri-St. Louis Triton won both the Arizona League batting title and MVP award in his first professional season. He also collected the South Atlantic League batting crown in 1993 beating out Derek Jeter. He went on to hit .295 over 742 career games.

Matthew Kent he is a baseball player.

Adam Blackley is a former Australian pitcher. He is the brother of Travis Blackley.

Talmadge Lafayette Abernathy, also known as Ted Abernathy, was a professional baseball player whose playing career spanned eight seasons, including parts of three in Major League Baseball with the Philadelphia Athletics (1942–1944). Abernathy was a pitcher. Over his major league career, he went 0–3 with an 11.07 earned run average (ERA), one complete game and 13 strikeouts in seven games, two starts. Abernathy batted right-handed and threw right-handed.

William Bradford Myers is an American professional baseball outfielder and first baseman for the San Diego Padres of Major League Baseball (MLB). He previously played for the Tampa Bay Rays.

The Hagerstown Owls were a Minor League Baseball team based in Hagerstown, Maryland, United States. The team played in the Inter-State League (1941–1952) and the Piedmont League (1953–1955). Their home games were played in Municipal Stadium.

Jesse Roy Levan was an American professional baseball player. In a 14-season pro career, he appeared in Major League Baseball in 1947 with the Philadelphia Phillies of the National League and in 1954 and 1955 with the American League's Washington Senators. He was officially listed as standing 6 feet (180 cm) and weighing 172 pounds (78 kg). In 25 career major league games, Levan had a .286 batting average with a home run and five runs batted in (RBI).

Fred Foster Griffin is an American professional baseball pitcher for the Kansas City Royals organization. He has previously played in Major League Baseball (MLB) for the Royals.

The 2021 Washington Nationals season will be the Nationals' 17th season as the baseball franchise of Major League Baseball in the District of Columbia, the 14th season at Nationals Park, and the 53rd since the original team was started in Montreal, Quebec, Canada.