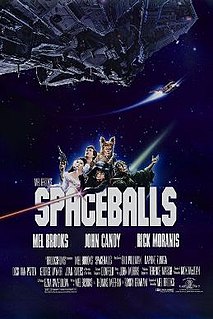 Cool Runnings is a 1993 American comedy sports film directed by Jon Turteltaub and starring Leon Robinson, Doug E. Doug, Rawle D. Lewis, Malik Yoba, and John Candy. The film was released in the United States on October 1, 1993. It was Candy's last film to be released during his lifetime. It is loosely based on the true story of the Jamaica national bobsleigh team's debut in competition during the 1988 Winter Olympics in Calgary, Alberta, Canada. The film received generally positive reviews. The film's soundtrack also became popular with Jimmy Cliff's cover of "I Can See Clearly Now" reaching the top 40 as a single in the United States, Canada, France, and the UK.

Michael Leslie Winslow is an American actor, comedian and beatboxer billed as The Man of 10,000 Sound Effects for his ability to make realistic sounds using only his voice. He is best known for his roles in all seven Police Academy films as Larvell Jones. He has also appeared in Spaceballs, Cheech and Chong's Next Movie and Nice Dreams, The Love Boat, and commercials for Cadbury and GEICO.

Jim Kouf is an American screenwriter, director, and producer. He received the 1988 Edgar Award for Best Motion Picture Screenplay for his work on Stakeout (1987).

John Henry Alvin was an American cinematic artist and painter who illustrated many movie posters. Alvin created posters and key art for more than 135 films, beginning with the poster for Mel Brooks' Blazing Saddles (1974). His style of art became known as Alvinesque by friends and colleagues in the entertainment industry.

Jymn Magon is an American television and film writer. 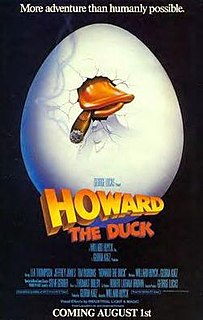 Howard the Duck is a 1986 American superhero sci-fi comedy film directed by Willard Huyck and starring Lea Thompson, Jeffrey Jones, and Tim Robbins. Based on the Marvel Comics character of the same name, the film was produced by Gloria Katz and written by Huyck and Katz, with George Lucas as executive producer. The screenplay was originally intended to be an animated film, but the film adaptation became live-action because of a contractual obligation. Although several TV adaptations of Marvel characters had aired during the preceding 21 years, this was the first attempt at a theatrical release since the Captain America serial of 1944. 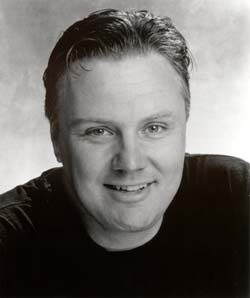 Dennis the Menace is a 1986-1988 American animated series produced by DIC Animation City, based on the comic strip by Hank Ketcham.

Mesa Amphitheatre is an outdoor concert venue with lawn seating located in Mesa, Arizona. It opened in 1979 and has a maximum capacity of 4,950 people.

Dey Young is an American actress and sculptor.

Michael Goldberg was an American screenwriter.

A Thousand Junkies is a 2017 American comedy-drama film directed by and starring Tommy Swerdlow. It is Swerdlow's directorial debut.