Tomographic reconstruction creates three-dimensional views of an object by combining two-dimensional images taken from multiple directions, for example in how a computer-aided tomography scanner allows 3D views of the heart or brain. Data collection can be rapid, but the required computations are massive. Further, many common experimental perturbations can degrade the quality of tomographs, unless corrections are applied. Unless automated tools make these corrections, beamline staff can be overwhelmed by data that can be collected far faster than corrections and reconstruction can be performed. [3]

To address the needs for image correction and tomographic reconstruction in an instrument independent manner, the TomoPy code was developed, which is a parallelizable high performance tomography library.

Positron emission tomography (PET) is a functional imaging technique that uses radioactive substances known as radiotracers to visualize and measure changes in metabolic processes, and in other physiological activities including blood flow, regional chemical composition, and absorption. Different tracers are used for various imaging purposes, depending on the target process within the body. For example, 18F-FDG is commonly used to detect cancer, NaF-F18 is widely used for detecting bone formation, and oxygen-15 is sometimes used to measure blood flow.

A CT scan or computed tomography scan is a medical imaging technique that uses computer-processed combinations of multiple X-ray measurements taken from different angles to produce tomographic (cross-sectional) images of a body, allowing the user to see inside the body without cutting. The personnel that perform CT scans are called radiographers or radiologic technologists. 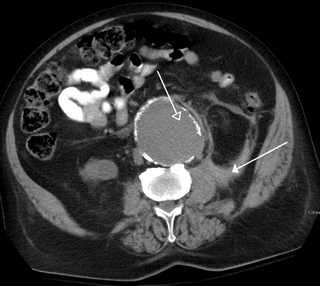 Medical imaging is the technique and process of creating visual representations of the interior of a body for clinical analysis and medical intervention, as well as visual representation of the function of some organs or tissues (physiology). Medical imaging seeks to reveal internal structures hidden by the skin and bones, as well as to diagnose and treat disease. Medical imaging also establishes a database of normal anatomy and physiology to make it possible to identify abnormalities. Although imaging of removed organs and tissues can be performed for medical reasons, such procedures are usually considered part of pathology instead of medical imaging.

Single-photon emission computed tomography is a nuclear medicine tomographic imaging technique using gamma rays. It is very similar to conventional nuclear medicine planar imaging using a gamma camera, but is able to provide true 3D information. This information is typically presented as cross-sectional slices through the patient, but can be freely reformatted or manipulated as required. 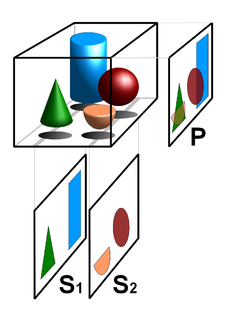 Tomography is imaging by sections or sectioning through the use of any kind of penetrating wave. The method is used in radiology, archaeology, biology, atmospheric science, geophysics, oceanography, plasma physics, materials science, astrophysics, quantum information, and other areas of science. The word tomography is derived from Ancient Greek τόμος tomos, "slice, section" and γράφω graphō, "to write" or, in this context as well, " to describe." A device used in tomography is called a tomograph, while the image produced is a tomogram.

Electrical impedance tomography (EIT) is a noninvasive type of medical imaging in which the electrical conductivity, permittivity, and impedance of a part of the body is inferred from surface electrode measurements and used to form a tomographic image of that part. Electrical conductivity varies considerably among various biological tissues or the movement of fluids and gases within tissues. The majority of EIT systems apply small alternating currents at a single frequency, however, some EIT systems use multiple frequencies to better differentiate between normal and suspected abnormal tissue within the same organ.

An X-ray microscope uses electromagnetic radiation in the soft X-ray band to produce magnified images of objects. Since X-rays penetrate most objects, there is no need to specially prepare them for X-ray microscopy observations.

Tomographic reconstruction is a type of multidimensional inverse problem where the challenge is to yield an estimate of a specific system from a finite number of projections. The mathematical basis for tomographic imaging was laid down by Johann Radon. A notable example of applications is the reconstruction of computed tomography (CT) where cross-sectional images of patients are obtained in non-invasive manner. Recent developments have seen the Radon transform and its inverse used for tasks related to realistic object insertion required for testing and evaluating computed tomography use in airport security.

Nanotomography, much like its related modalities tomography and microtomography, uses x-rays to create cross-sections from a 3D-object that later can be used to recreate a virtual model without destroying the original model, applying Nondestructive testing. The term nano is used to indicate that the pixel sizes of the cross-sections are in the nanometer range

Discrete tomography focuses on the problem of reconstruction of binary images from a small number of their projections.

Electron tomography (ET) is a tomography technique for obtaining detailed 3D structures of sub-cellular macro-molecular objects. Electron tomography is an extension of traditional transmission electron microscopy and uses a transmission electron microscope to collect the data. In the process, a beam of electrons is passed through the sample at incremental degrees of rotation around the center of the target sample. This information is collected and used to assemble a three-dimensional image of the target. For biological applications, the typical resolution of ET systems are in the 5–20 nm range, suitable for examining supra-molecular multi-protein structures, although not the secondary and tertiary structure of an individual protein or polypeptide.

Process tomography consists of tomographic imaging of systems, such as process pipes in industry. In tomography the 3D distribution of some physical quantity in the object is determined. There is a widespread need to get tomographic information about process. This information can be used, for example, in the design and control of processes.

Avizo is a general-purpose commercial software application for scientific and industrial data visualization and analysis. 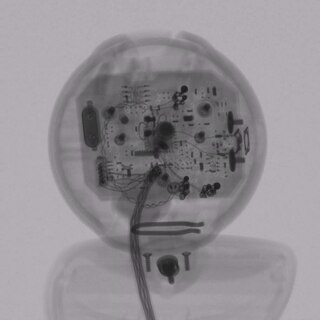 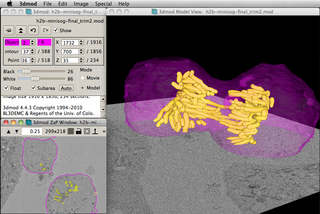 IMOD is an open-source, cross-platform suite of modeling, display and image processing programs used for 3D reconstruction and modeling of microscopy images with a special emphasis on electron microscopy data. IMOD has been used across a range of scales from macromolecule structures to organelles to whole cells and can also be used for optical sections. Included in IMOD are tools for image reconstruction, image segmentation, 3D mesh modeling and analysis of 2D and 3D data.

Phase-contrast X-ray imaging (PCI) or phase-sensitive X-ray imaging is a general term for different technical methods that use information concerning changes in the phase of an X-ray beam that passes through an object in order to create its images. Standard X-ray imaging techniques like radiography or computed tomography (CT) rely on a decrease of the X-ray beam's intensity (attenuation) when traversing the sample, which can be measured directly with the assistance of an X-ray detector. In PCI however, the beam's phase shift caused by the sample is not measured directly, but is transformed into variations in intensity, which then can be recorded by the detector.

Four-dimensional computed tomography (4DCT) is a type of CT scanning which records multiple images over time. It allows playback of the scan as a video, so that physiological processes can be observed and internal movement can be tracked. The name is derived from the addition of time to traditional 3D computed tomography. Alternatively, the phase of a particular process, such as respiration, may be considered the fourth dimension.

X-ray computed tomography operates by using an X-ray generator that rotates around the object; X-ray detectors are positioned on the opposite side of the circle from the X-ray source.