Tomorrowland: Our Journey from Science Fiction to Science Fact is a 2015 non-fiction book by science journalist Steven Kotler and published by Amazon Publishing.

The book is composed of a series of essay articles that were published by Kotler in various online news publications, including The New York Times , The Atlantic , and Discover . There are sixteen chapters made up of the same number of articles, each dealing with a different topic of technological innovation in a variety of fields. [1]

Kirkus Reviews praised Kotler for not just presenting the technological innovations themselves, but also focusing on the "obsessive people behind the science" and how his insight into their work encompasses a "range from humane and gripping stories of redemption to indifferent research scientists unsure if their developments will even make the world a better place". [2] Library Journal reviewer Talea Anderson also noted the introduction of each essay and discussed technology focusing on "presenting the array of often quirky inventors and early adopters who have engaged with it" and ultimately recommended the book for readers of popular science. [3] In a separate review in Library Journal of the audiobook, reviewer Lisa Youngblood recommended the book and its look at not only the technology, but also the "social and moral questions that arise" from the potential ramifications of the emerging technologies. [4]

The Golden Oecumene is a science fiction trilogy by the American writer John C. Wright. It consists of three books, The Golden Age, The Phoenix Exultant and The Golden Transcendence.

1632 is the initial novel in the best-selling alternate history 1632 book series written by American historian, writer and editor Eric Flint published in 2000. The flagship novel kicked off a collaborative writing effort that has involved hundreds of contributors and dozens of authors. The premise involves a small American town of three thousand, sent back to May 1631, in an alternate Holy Roman Empire during the Thirty Years' War.

A book review is a form of literary criticism in which a book is merely described or analyzed based on content, style, and merit. A book review may be a primary source, opinion piece, summary review or scholarly review. Books can be reviewed for printed periodicals, magazines and newspapers, as school work, or for book web sites on the Internet. A book review's length may vary from a single paragraph to a substantial essay. Such a review may evaluate the book on the basis of personal taste. Reviewers may use the occasion of a book review for an extended essay that can be closely or loosely related to the subject of the book, or to promulgate their own ideas on the topic of a fiction or non-fiction work. 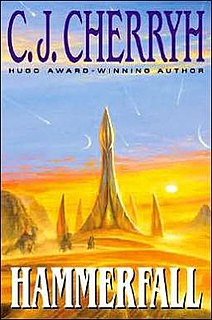 Hammerfall is a science fiction novel by American science fiction and fantasy author C. J. Cherryh. It was first published in June 2001 in the United States by HarperCollins under its Eos Books imprint. It was also serialized in two parts as Ribelle Genetico and Il Pianeta del Deserto in the Italian science fiction magazine, Urania, published in issue 1425 in October 2001, and issue 1430 in January 2002, respectively.

Heart of Gold is a science fiction novel by American writer Sharon Shinn, published in 2000. The story occurs on an unnamed world in an unnamed city where three races live together. The books focuses on conflicts between the aristocratic, pastoral, and matriarchal Indigo and the clannish, technological, and patriarchal gulden, with little said about the third albino race.

Parasite Rex: Inside the Bizarre World of Nature's Most Dangerous Creatures is a nonfiction book by Carl Zimmer that was published by Free Press in 2000. The book discusses the history of parasites on Earth and how the field and study of parasitology formed, along with a look at the most dangerous parasites ever found in nature. A special paperback edition was released in March 2011 for the tenth anniversary of the book's publishing, including a new epilogue written by Zimmer. Signed bookplates were also given to fans that sent in a photo of themselves with a copy of the special edition.

Outcast is a novel by Aaron Allston that was released on March 24, 2009. It is the first novel in the Fate of the Jedi series and published as a hardcover.

Physics of the Future: How Science Will Shape Human Destiny and Our Daily Lives by the Year 2100 is a 2011 book by theoretical physicist Michio Kaku, author of Hyperspace and Physics of the Impossible. In it Kaku speculates about possible future technological development over the next 100 years. He interviews notable scientists about their fields of research and lays out his vision of coming developments in medicine, computing, artificial intelligence, nanotechnology, and energy production. The book was on the New York Times Bestseller List for five weeks.

Steven Kotler is an American author, journalist, and entrepreneur. His articles have appeared in over 70 publications, including The New York Times Magazine, LA Times, Wired, Time Magazine, GQ, Discover, Popular Science, Outside, Men’s Journal, Details and National Geographic Adventure. He is best known for his non-fiction books, including the New York Times bestseller Abundance, A Small Furry Prayer, West of Jesus, Bold, The Rise of Superman and Stealing Fire. 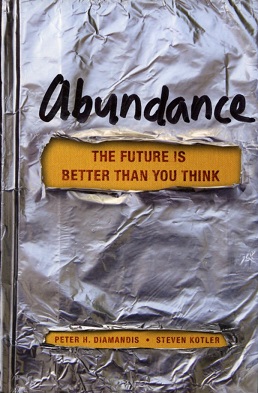 Abundance: The Future Is Better Than You Think is a book by Peter H. Diamandis and Steven Kotler that was published in 2012. The writers refer to the book's title as being a future where nine billion people have access to clean water, food, energy, health care, education, and everything else that is necessary for a first world standard of living, thanks to technological innovation.

Amy Myers is a British mystery writer. She is best known for her Marsh and Daughter mystery series, featuring a writing team consisting of a wheel-chair bound ex-policeman and his daughter, and for another series featuring a Victorian era chef, Auguste Didier. Myers' books have been favourably reviewed in Library Journal, Publishers Weekly, Booklist, and Kirkus Reviews. Myers has also been published several times in Ellery Queen's Mystery Magazine. Janet Hutchings, the magazine's longtime editor, called Myers "one of our best and most frequent contributors of historicals".

Word by Word: Emancipation and the Act of Writing is a 2013 history book and analysis of writings by American slaves and former slaves. It was written by Christopher Hager and published by Harvard University Press. 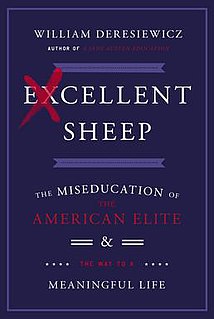 Excellent Sheep: The Miseducation of the American Elite and the Way to a Meaningful Life is a 2015 book of social criticism on the role of elite colleges in American society written by William Deresiewicz and published by Free Press. Deresiewicz addresses the pressure of succeeding under which students are put by their parents and by society, considering more particularly the ones that are planning to attend Ivy League universities.

The End of College: Creating the Future of Learning and the University of Everywhere is a book by higher education writer and policy analyst Kevin Carey about the future of higher education.

Listen, Liberal: Or, What Ever Happened to the Party of the People? is a 2016 book by Thomas Frank about how the American Democratic Party has changed to support elitism in the form of a professional class instead of the working class. 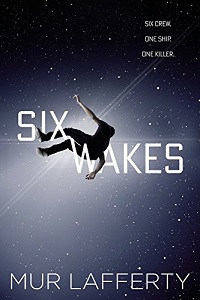 Six Wakes is a science fiction mystery novel by Mur Lafferty. It was first published in trade paperback and ebook by Orbit Books in January 2017.

Arwen Elys Dayton is an American author of science fiction, fantasy and speculative fiction. The author of seven published works, she is best known for her novels Resurrection and the Seeker trilogy. The 2012 novel Resurrection was an Amazon.com Kindle best seller, reaching #2 on national sales charts. The rights to her 2015 novel Seeker were purchased by Columbia Pictures in 2013. Her 2018 novel, Stronger, Faster, and More Beautiful, was cited by Tom Shippey of the Wall Street Journal as one of the best science fiction novels of 2018. She is married to tech entrepreneur Sky Dayton and lives in Oregon's Willamette Valley.

Maureen Brady is an American writer, editor and educator. She is best known for her novels Ginger's Fire, Folly, and Give Me Your Good Ear. She currently lives and works in New York City and Woodstock, NY.