Tomrefjord Idrettslag is a Norwegian sports club from Tomrefjord, founded in 1921. It has sections for association football, volleyball, cycling, gymnastics, climbing and Nordic skiing. 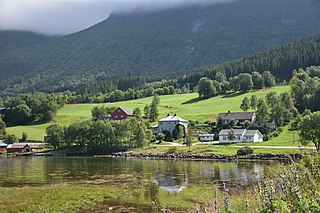 Tomra or Tomrefjord is a village located in Vestnes Municipality in Møre og Romsdal county, Norway. It is located just south of the village of Vik at the end of the Tomrefjorden. The village of Fiksdal lies 8 kilometres (5.0 mi) to the northwest. The 1.41-square-kilometre (350-acre) village has a population (2013) of 1,183; giving the village a population density of 839 inhabitants per square kilometre (2,170/sq mi).

The men's football team currently plays in the Fourth Division, the fifth tier of Norwegian football, having won promotion in 2015. The team formerly had a stint in the Third Division, ending in 1997. Notable former players include Bernt Hulsker.

FK Bodø/Glimt is a Norwegian football club from the town of Bodø that currently plays in Eliteserien, the Norwegian top division. The club was founded in 1916. Its nickname is the original club name: Glimt.

Strømsgodset IF is a Norwegian multi-sports club from Gulskogen in Drammen. It has sections for association football, handball and bandy, but is best known for the top-level football section known as Strømsgodset Toppfotball, which plays in Tippeligaen, the Norwegian top flight.

Sarpsborg 08 Fotballforening, commonly known as Sarpsborg 08 or simply Sarpsborg ([ˈsɑʂbɔr], is a Norwegian football club based in Sarpsborg, playing in Eliteserien. Sarpsborg 08 played in 1. divisjon from 2005 to 2010. In 2010, the club was promoted to the Tippeligaen, the top league in Norway, but finished last and was relegated back to 1. divisjon in 2011. In 2012, they were promoted again and 6 years after, they qualified for their first Europa League group stage. They play their home games at Sarpsborg Stadion.

Bjørn Rune Gjelsten is a Norwegian businessman and Offshore powerboat racing World Champion. He was also a joint owner of Wimbledon Football Club and involved in the controversial relocation of the team from London to Milton Keynes. 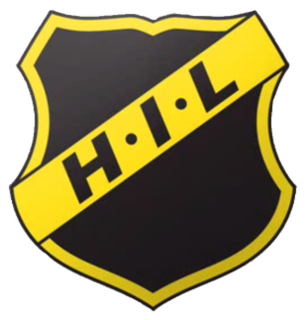 SF Grei is a Norwegian sports club from Rødtvet, Oslo. It currently has sections for association football, floorball, gymnastics and skiing.

Sandefjord Ballklubb is a Norwegian football club from Sandefjord, currently playing in Norwegian Fourth Division. Their home matches are played at Storstadion in Sandefjord.

Sportsklubben Djerv 1919 is an association football club from Haugesund, Norway, established in 1919. Its top team plays in the Fourth Division, the fifth tier of Norwegian football, after being relegated from the 3. divisjon in 2011.

Avaldsnes Idrettslag is a Norwegian sports club from Avaldsnes, Karmøy, Rogaland. It was founded on 16 June 1937. The club has sections for football and handball.