This following is a list of the work released by German rock band Ton Steine Scherben. It is currently missing the (few) singles issued by the band.

The following albums were issued after the band ceased recording:

In 2006 the studio albums were re-issued, digitally remastered. Those parts of the last two studio albums for which the original recording session tapes remained in existence (about half of them having been destroyed in a fire) were also remixed, since the band had always been unhappy with quality of the original mixes. The packaging was made of paper instead of plastic, to resemble the original LP-wrapping. The box included 8 copies of original posters and an 80-page book with a short history of the band.

Reinhard Friedrich Michael Mey is a German "Liedermacher". In France he is known as Frédérik Mey.

Lieder eines fahrenden Gesellen is a song cycle by Gustav Mahler on his own texts. The cycle of four Lieder for medium voice was written around 1884–85 in the wake of Mahler's unhappy love for soprano Johanna Richter, whom he met while conductor of the opera house in Kassel, Germany, and orchestrated and revised in the 1890s.

Kristina Bach is a German "Schlager" singer, lyricist, and music producer. Bach is noted for her 3 ½-octave vocal range.

The Symphony No. 8 "Lieder der Vergänglichkeit" by Krzysztof Penderecki is a choral symphony in twelve relatively short movements set to nineteenth and early twentieth-century German poems. The work was completed and premiered in 2005. The symphony has an approximate duration of 35 minutes. Penderecki revised the symphony in 2007 by adding a few more poem settings and the piece has expanded to around 50 minutes. It was the final symphony composed by Penderecki, before his death in March 2020.

Warum geht es mir so dreckig? is the first album released by the German rock band Ton Steine Scherben. It includes—among other pieces—the song Macht kaputt, was euch kaputt macht, which expressed the built-up anger and radicalization of the youth of the late 1960s and early 1970s.

Keine Macht für Niemand is the name of both the second album and best-known song by the band Ton Steine Scherben. The double album, released in 1972, is also sometimes called "die Weiße" in reference to its simple cover with a white background and black text.

Wenn die Nacht am tiefsten… is the third album released by Ton Steine Scherben, and is the last one released before their six-year break from recording. It shows the first signs of a change in genre: moving away from Macht kaputt was euch kaputt macht towards Halt dich an deiner Liebe fest.

Augustin Pfleger was a German composer of Bohemian birth.

Frei.Wild is a German rock band from Brixen, South Tyrol. Its members belong to the German-speaking population of South Tyrol and their songs are mostly in German.

The Kinderfest in Memmingen has a tradition going back more than 400 years. Every year more than 2000 children from the municipal primary and secondary schools take part in the festival. 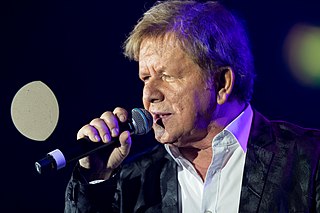