Tonga, Cameroon is a town and commune in Cameroon.

The Tonga sub-division has three major village groups: Badoumga (Banounga), Baloua and Babitchoua. Its area is 342 km2 (132 sq mi) with a population of 15000. The capital of this subdivision is Tonga Town, which is 90 km (56 mi) from the regional capital Bafoussam and 30 km (19 mi) from the divisional capital Bangangte. Tonga is on the Yaounde Bafoussam road and is about 220 kilometres (140 mi) from Yaounde, the capital of Cameroon. It is about 10 km (6.2 mi) from Makene, a bus stop along the Bafoussam Yaoundé highway.

The population is 98% subsistence farmers producing food crops and cash crops like cocoa and coffee in small farms.

On the health front, the Tonga sub-division has 3 health facilities:

The climate is equatorial, characterized by the alternation of two dry seasons and two rainy seasons.

Abong-Mbang is a town and commune in the East Region of Cameroon. Abong-Mbang is located at a crossroads of National Route 10 and the road that leads south to Lomié. Yaoundé, the capital of Cameroon, is 178 km to the west, and Bertoua, the capital of the East Province, lies 108 km to the east. From Ayos, at the border in the Centre Province 145 km (90 mi) from Abong-Mbang, the tar on National Route 10 ends and a dirt road begins. Abong-Mbang is the seat of the Abong-Mbang sub-division and the Haut-Nyong division. The town is headed by a mayor. Gustave Mouamossé has held the post since August 2002. Abong-Mbang is site of one of the East Province's four Courts of First Instance and a prefectural prison. The population was estimated at 18,700 in 2001. 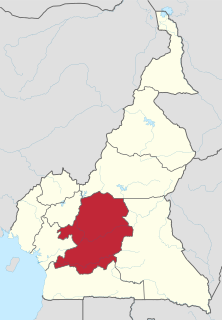 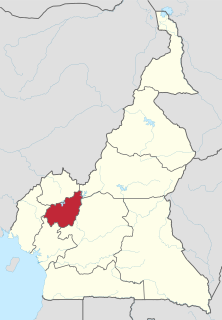 Bangangté is a town and commune in Cameroon. It is the capital of the Ndé division of West Region. The town is primarily inhabited by the people of the Bamileke (Bamiléké) tribe.

Bafia is a Cameroonian town and commune in the Centre Province region. It is the capital of the Mbam-et-Inoubou department. It lies 120 km (75 mi) north of the country's capital Yaoundé. Bafia has approximately 55,700 inhabitants, making it the third largest city in the province after Yaoundé and Mbalmayo. Most citizens belong to either the Bafia people or the Yambassa people. It is the see of the eponymous diocese.

Dschang is a city located in the West (Ouest) Province of Cameroon, with an estimated population of 87,000 (est) in 2001, growing dramatically from 21,705 recorded in 1981. The 2006 Population is estimated to be 200,000 inhabitants. Dschang is the capital of the division of Ménoua. The Bamiléké are the predominant ethnic tribe.

Mfou is a town in the south part of Cameroon. It is not far east of the capital, Yaoundé. It is a rural area and the activities of the inhabitants are basically subsistence agriculture.

Batié is a town and commune in the Hauts Plateaux Division in western Cameroon. It is located at latitude 5.283333 and longitude 10.28333. Batié is known for its association football club Sable FC, the "San San Boys", named after the sand production in this mountainous region. The climate in Batié is very mild. Rainy season typically lasts from March through October. Dry season begins in November and goes into March of the following year.

The Arrondissements of Cameroon are the third-level units of administration in Cameroon. The arrondissements are organised by divisions and sub divisions of each province.

NDE is one of the 58 divisions found in Cameroon. It is located in the western region of the Country, about 150km from Douala the economic capital and about 265 km from Yaoundé the political capital. Its estimated population is 304,800. There are two meanings that are attached to the acronym NDE. The first and most popular is Nobility, Dignity, Elegance. The second meaning is New, Deal, Economy. Bangangte has been the headquarter of the NDE division since June 14, 1961. Medumba is the most common language spoken in this region. Its kingdoms include; Bangangte, Bangoulap, Balengou, Bazou, Bakong, Bamena, Tonga (Badounga), Bahouoc, Bangang-Fokam, Bawock, Bangoua, Batchingou, Bamaha and Bagnoun. The main Religious belief is Christianity, with the two main denominations being Catholics and Protestant. Its climate ranges between 14- 22 Celsius at night and between 24-30 Celsius. Some anthropological research has been done by Pradelles de Latour.

Ndian is a department of Southwest Region in Cameroon. It is located in the humid tropical rainforest zone about 650 km (400 mi) southeast of Yaoundé, the capital.

Ayos is a town and commune in the department of Nyong-et-Mfoumou Centre region of Cameroon. 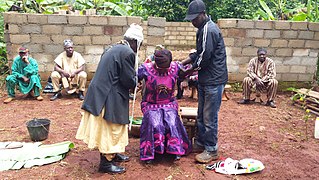 Baham is the seat of the Department of Hauts-Plateaux, in the Western Province of Cameroon. It also constitutes a traditional Bamileke chiefdom.

Bazou is a town and commune located in the West Region of Cameroon. The town consists of 63 villages, and is one of the three subdivisions of the department of Ndé. Covering around 250 km2, it is located on the high plateau of Bamileke, 950–1400 m above sea level. The name Bazou comes from the Baze expression for walking because of the long migratory marches caused by frequent internal conflicts.

Yabassi is a town and commune in western Cameroon, and capital of the Nkam department. Its population in 2001 was estimated at 12,000. The main dialect spoken is the Yabassi. However, there are also other dialects originating in the Nkam which are spoken.

Wabane is a town and council/commune in Cameroon. It is the headquarters of Wabane sub-division in Lebialem division Southwest Region of Cameroon.

Messamena is a town and commune in Cameroon.