Alcinas started competing in PDC Europe events in 2010. After reaching the quarter-finals of a Players Championship in Haarlem in June 2010, [2] he qualified for the European Championship via the PDC European Order of Merit. He was defeated 6–3 in the first round by Mark Walsh, despite hitting a 160 checkout to go 3–2 ahead. Alcinas is an accomplished soft-tip darts player and won the 2010 Soft Tip NDA World Championship.

He teamed up with Carlos Rodríguez to represent Spain at the 2010 PDC World Cup of Darts. They defeated Japan in the first round, before knocking out the top seeds England (represented by the world's top two players, Phil Taylor and James Wade) 6–5 in the second round. In the group stage, they lost to Wales but defeated the United States and Scotland to qualify for the semi-finals, where they were whitewashed 0–4 by the Netherlands.

Alcinas qualified for his first PDC World Darts Championship in 2011. He lost 0–3 to James Wade in the first round.

In the 2012 PDC World Championship Alcinas was knocked out 2–3 in the first round by Andy Hamilton in a high-quality match. He averaged 107.82 to win the first set and had two darts in the first leg of the deciding set to break throw, but missed and ultimately lost with an average of 98.76, which was the third highest average out of all the players in the first round. [4] He once again partnered Rodriguez in the 2012 PDC World Cup of Darts, but they could not repeat their success of 2010 as they were beaten 2–5 by South Africa in the first round. [5] The rest of 2012 proved to be disappointing for Alcinas as he took part in 22 PDC ProTour events, with his best result being a last 32 loss to Dennis Priestley in the sixth UK Open Qualifier. [6] In an attempt to qualify for the 2013 World Championship he was beaten in the semi-finals of the West European Qualifying by Stefan Couwenberg. [7] After the World Championship Alcinas was ranked world number 60, inside the top 64 who retained their tour cards for 2013. [8]

Alcinas played with Carlos Rodríguez for the third time in the World Cup of Darts and they qualified from Group D courtesy of a 5–3 win over Italy. [9] They then repeated their 2010 shock win over the Scottish pair of Gary Anderson and Robert Thornton this time 5–4 and played Richie Burnett and Mark Webster in the quarter-finals. [10] Alcinas missed four match darts in his singles tie against Webster to lose 4–3, but Rodríguez beat Burnett by the same scoreline to mean a doubles match was needed to settle the tie. Spain took an early 2–1 lead but went on to be defeated 4–2. [11] His best result in an individual event in the rest of 2013 was a last 16 loss to Robert Thornton in the final UK Open Qualifier. [12] At the UK Open, Alcinas lost 5–3 to Darren Johnson in the preliminary round. [13] Alcinas did not play the full schedule of PDC events and earned just £1,350 over the course of the year to plummet to 142nd in the world. [14] [15] He entered Q School in a bid to win his place on the tour back and succeeded on the first day by defeating Brian Woods 5–3 in his final match. [16]

In March 2014, Alcinas beat Glenn Spearing and Matthew Edgar to reach the third round of the UK Open for the first time in his career where he was thrashed 9–2 by Christian Kist. [17] He advanced to the last 16 of an event for the first time in over a year at the seventh Players Championship courtesy of victories over Nigel Heydon, Mark Barilli and Stuart Kellett, before losing 6–3 to Keegan Brown. [18] In the second round of the World Cup of Darts, Alcinas and Rodríguez lost their singles matches against the Dutch pair of Michael van Gerwen and Raymond van Barneveld to exit the tournament. [19] He was knocked out at the same stage a year later this time partnering Cristo Reyes for the first time, as they lost to the Belgium brothers of Kim and Ronny Huybrechts. [20] In individual events during 2015, Alcinas qualified for the International Darts Open and European Darts Grand Prix, but was eliminated in the first round of both. [21] He reached the final of the South European Qualifier for the 2016 World Championship and lost 6–4 to John Michael. [22]

In 2016, Alcinas reached the last 32 of both the 6th and 9th Players Championship events, losing 6–3 to Steve Brown in the former and 6–2 to Joe Cullen in the latter. [23] [24] He beat Stuart Kellett 6–1 in the opening round of the Gibraltar Darts Trophy, before going out 6–5 to Ian White in the second round. [25] Alcinas and new partner Cristo Reyes almost pulled off a shock in the first round of the World Cup as they lost 5–4 to England's Phil Taylor and Adrian Lewis. [26]

In January 2017, Alcinas secured a new two-year PDC Tour Card by whitewashing Jimmy Hendriks 5–0 in the last round of the final day of Q School. [27] Alcinas and Cristo Reyes were thrashed 4–0 in the deciding doubles match in the second round of the World Cup to the Singapore team of Paul Lim and Harith Lim. [28] At the 2018 PDC World Darts Championship he beat fellow Spanish Cristo Reyes 3-1 to progress to the second round for the first time. He then beat German Kevin Münch 4-1 to go into the Last 16, where he lost 4-0 to Darren Webster. [29] 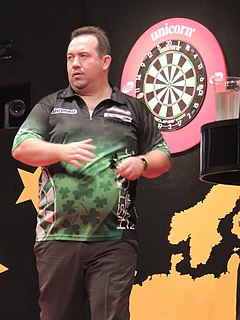 Brendan Gabriel Dolan is a Irish professional darts player from County Fermanagh, Northern Ireland, who plays in Professional Darts Corporation (PDC) events. He is best known for becoming the first player to hit a nine-dart finish in a double to start an event, which he did at the 2011 World Grand Prix. He lost to Phil Taylor in the final of the tournament; to date, it was his only appearance in a major final. Away from the television cameras, in floor events on the PDC Pro Tour, Dolan lost his first seven finals before winning his maiden ranking title in 2013.

Dylan Duo is a Gibraltarian professional darts player who has played in the Professional Darts Corporation events.

Kim Huybrechts is a Belgian professional darts player currently playing in Professional Darts Corporation (PDC) events. He made the final of a major TV event, the 2012 Players Championship Finals, losing to Phil Taylor 13-6, as well as making the final of the 2013 PDC World Cup of Darts with his brother Ronny. He has also achieved the perfect nine-dart finish on TV, doing so in the 2014 Grand Slam of Darts against Michael van Gerwen in the quarter-finals, and has appeared in the Premier League on two occasions.

Robert Marijanovic is a German darts player of Croatian heritage.

Dimitri Van den Bergh is a Belgian darts player who currently competes in Professional Darts Corporation (PDC) events. He is a two-time World Youth Champion and the current World Matchplay champion, after beating Gary Anderson 18–10 in the final, in his first time competing in the Matchplay.