Toni Foulkes is the former alderman of Chicago's 16th ward, [1] and was formerly the alderman for the 15th ward. [2] She is African American. [3]

In 2007, Foulkes was elected Chicago alderman for the 15th Ward, winning an open-race to succeed outgoing alderman Theodore Thomas. She was reelected in 2011.

She was redistricted to the 16th Ward, where she won election in 2015. The race saw her running against incumbent 16th Ward alderman JoAnn Thompson, in addition to several other contenders. However, Thompson died two weeks before the initial round of voting in the election. [4] [5] Ultimately, the election saw her win a runoff election against Stephanie Coleman. [6]

In 2019, Foulkes was unseated by Stephanie Coleman, who she had narrowly defeated in the previous election.

In 2014, she supported a bill to require employers to provide paid for sick leave for all Chicago workers. [7]

Helen Shiller is a former Alderman of the 46th ward in Chicago, Illinois. She served in the Chicago City Council for six four-year terms, from 1987 to 2011. Shiller was elected to the City Council on her third attempt, as Harold Washington, Chicago's first black Mayor, was re-elected to his second term, and her election as alderman helped close the Council Wars era in Chicago government. Shiller has been described as "committed to liberal causes and destroying all within her path". Among her most significant impacts on Chicago were her advocacy for diverse, inclusive, affordable housing and helping craft Chicago's response to the HIV/AIDS crisis. Her commitment to fostering community development without displacement often brought Shiller into contention with some constituencies, real estate developers, and editorial boards. Shiller's oral history was collected by Pulitzer Prize-winning author and Uptown resident Studs Terkel in his 2003 book, Hope Dies Last.

Shirley Ann Coleman is an American politician and pastor. Coleman is a former alderman of the 16th ward in Chicago, Illinois. Coleman was first elected in January 1991, serving for sixteen years until May 2007 when she lost a run-off election to JoAnn Thompson after coming in second in the 2007 general election. As of 2017, Coleman is the only alderman to date elected in the 16th Ward for four consecutive terms. Coleman made history as the only African American Chicago female alderman who is an ordained minister and pastor. 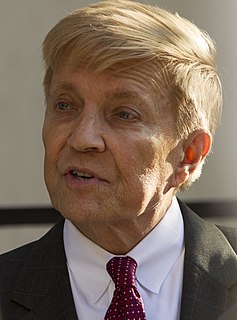 Robert William (Bob) Fioretti is an American attorney and politician who served as an alderman in the Chicago City Council for the 2nd Ward, which included portions of Bronzeville, East Garfield Park, Illinois Medical District, Little Italy, Loop, Near West Side, Prairie District, South Loop, University Village, Westhaven, and West Loop. Bob first ran for office because of inequities and disinvestments he saw throughout the City of Chicago and communities of the 2nd Ward. He first won election as alderman in 2007 and was re-elected in 2011. He also served as 2nd Ward Democratic Committeeman for two terms, which is a position in the Cook County Democratic Party. 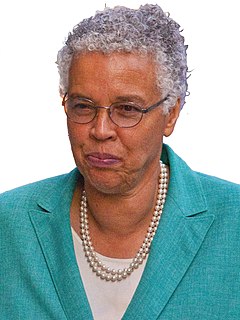 Toni Lynn Preckwinkle is an American politician and the current Cook County Board President in Cook County, Illinois, United States. She was first elected as President of the Cook County Board of Commissioners, the executive branch of Cook County government, in November 2010 and became the first woman elected to this position. She was previously a five-term alderman in the Chicago City Council, representing Chicago's 4th ward. Preckwinkle was a candidate for Mayor of Chicago in the 2019 election, and advanced to the runoff election on April 2, but lost to Lori Lightfoot.

Mary E. O'Connor is a former Chicago city alderman. She was the first female alderman to represent the 41st Ward of Chicago on the Northwest side of the city - the largest geographic ward in Chicago including O'Hare International Airport. She was elected with 50.88% of the total vote on April 5, 2011 in a runoff election, replacing outgoing alderman Brian Doherty. 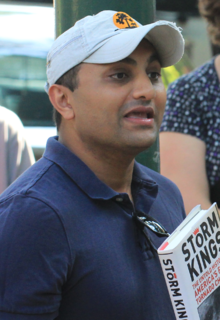 Ameya Pawar is an American politician who served as the alderman for the 47th Ward of the City of Chicago. He was first elected in the 2011 municipal elections, and was elected to a second term on February 24, 2015. Pawar's 2015 re-election was secured with over 82% of the vote, the largest margin in the election cycle. Pawar is the first Indian American and Asian American in Chicago City Council history.

Timothy M. Cullerton is a former Chicago City Council member who represented the 38th Ward on Chicago's Northwest Side. He was appointed by Mayor Richard M. Daley in 2011. 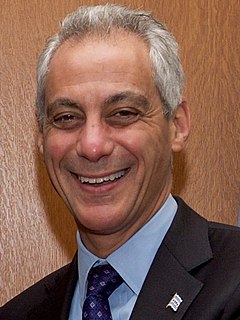 An election took place on February 24, 2015, to elect the mayor of Chicago. The election was non-partisan and no candidate received a majority. A runoff election was held between the top two finishers on April 7, 2015, and resulted in the reelection of incumbent mayor Rahm Emanuel. The elections were concurrent with the 2015 Chicago aldermanic elections.

Jesús G. "Chuy" García is a Mexican-born American politician serving as the U.S. Representative for Illinois's 4th district since 2019. A member of the Democratic Party, he served on the Cook County Board of Commissioners, Illinois Senate, as well as Chicago City Council before his election to Congress. A candidate for mayor of Chicago in the 2015 election, García finished second in the February 24 general election and forced a head-to-head runoff against the incumbent, Rahm Emanuel. Emanuel won the April 7 runoff. 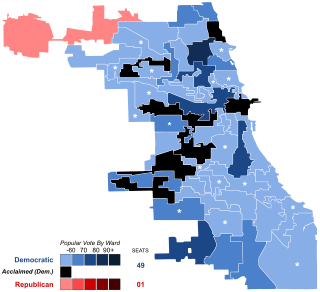 The 2015 Chicago aldermanic elections happened on February 24, 2015, to elect the 50 Aldermen that represent Chicago in the City Council. The elections were non-partisan and if no candidate received an absolute majority, a runoff would be held between the top two finishers on April 7, 2015.

Patrick Daley Thompson is an alderman in Chicago's 11th Ward. He is the grandson of Richard J. Daley and a nephew of Richard M. Daley, both of whom served as mayors of Chicago.

Michelle A. Harris is an American politician who is the alderman of Chicago's 8th ward and the chair of the Chicago City Council's rules committee. 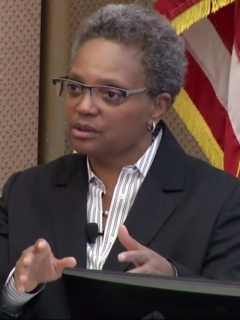 The 2019 Chicago mayoral election was the 2019 edition of the quadrennial elections held to determine the Mayor of the City of Chicago, Illinois. The election was held on February 26, 2019. Since no candidate received a majority of votes, a runoff election was held on April 2, 2019 between the two candidates with the most votes, Lori Lightfoot and Toni Preckwinkle. Lightfoot defeated Preckwinkle in the runoff election, becoming mayor-elect of Chicago. Lightfoot was sworn in as mayor on May 20, 2019. 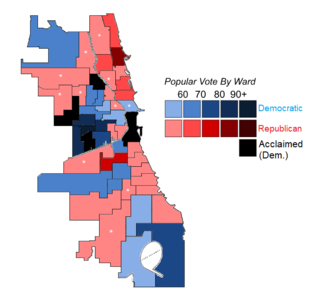 The 1929 Chicago Aldermanic elections happened on February 26, 1929, to elect the 50 aldermen of the City of Chicago. The elections were non-partisan, and in races without any candidate receiving an absolute majority of votes runoff elections were held on April 2. Held in the middle of the mayor's term, it would be the penultimate such election; four-year terms for aldermen were adopted in 1935, coinciding with the mayoral election that year.

The 2019 Chicago aldermanic election took place in two rounds on February 26 and April 2, 2019 to elect 50 aldermen to the Chicago City Council. Each alderman represents one of Chicago's 50 wards. The elections are non-partisan and use a two-round system where the top two finishers compete in a second-round run-off if no candidate receives more than 50% of the vote in the first round. The elections were party of the 2019 Chicago elections, which included elections for Mayor, City Clerk, City Treasurer.

Stephanie Coleman is a Chicago politician. Coleman is the current alderman of Chicago's 16th ward, taking office as a member of the Chicago City Council in May 2019. She defeated incumbent alderman Toni Foulkes 2019 Chicago aldermanic elections. She is also the Democratic Party Committeeman in the 16th ward.