Vasil S. Tole is an Albanian composer of European classical music, including opera, chamber music, orchestral works and various pieces for small ensembles and solo instruments. He is the author of several books, mostly about the music of Albania.

Alekos Fassianos is a contemporary Greek painter born in Athens in 1935.

Alexandros Tzannis is a Greek painter. His work has been shown at the Künstlerhaus Bethanien in Berlin, Germany, the New Benaki Museum, Athens and the Macedonian Museum of Contemporary Art, Thessaloniki, Greece. 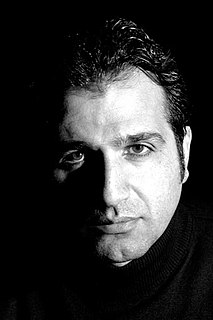 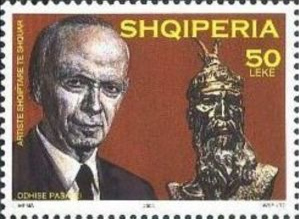 Odhise Paskali is one of the most acclaimed Albanian sculptors. For his contribution, he was awarded the People's Artist of Albania award.

Venia Bechrakis is a visual artist who lives and works in Athens and New York City.

Helidon Gjergji is a contemporary artist who works in various mediums.

Nikos Alexiou was a Greek artist who specialized in visual art, contemporary art, installation art and set design for theatre and dance. He exhibited his work at personal exhibitions and group events both in Greece and abroad. Alexiou lived in central Athens until his death from cancer at the age of 51.

Vangelis Rinas is a Greek painter and sculptor having his roots in the Northeastern Aegean Sea. He was born on Samos island, but grew up in Ikaria island in 1966. He holds an MFA from the Athens School of Fine Arts and lives and works in Athens and New York. He express himself through various materials. He has created paintings sculptures, prints and installations. Since 1992 he enjoys shows in Greece and abroad and participates in international biennials. Among them, his solo exhibition at the National Art Museum of China in Beijing and his latest solo show at Tenri Cultural Institute in New York. Since 2000 he has presented three solo exhibitions entitled "Endless Sailing" All three included paintings and sculpture. His sculpture has been installed in the National Center for the Performing Arts in Beijing with Chinese ideograms and Braille writing.

Nikos Stratakis is a Greek painter of the contemporary period. He was born in Heraklion, Crete. He grew up in Athens and he studied at the Athens School of Fine Arts. His professors were Yannis Moralis and Dimitris Mytaras (painting) and Vassilis Vassiliadis. As a student he worked as a set designer assistant and as a set designer for Greek and foreign film productions. After his graduation, he has been working strictly as a painter, professionally. He lives and works in Athens, Greece. His works can be found in the collections of Greek museums, ministries and in notable private collections in Greece and abroad.

Parid Dule is an Albanian painter and karate instructor or martial arts trainer who lives and works in Tirana, originating from Përmet Albania. Vivaldi's Four Seasons inspired his latest exhibition in the National Historical Museum (Albania) on April 2011.

Janaq Paço was one of the best known Albanian sculptors of the 20th century. Some of his prominent works include the monuments of Skanderbeg in Kruja, Tirana, and Pristina, Kosovo, as well as The Gladiators.

Tassos Mantzavinos is a Greek painter who graduated from the Athens School of Fine Arts. His work has been exhibited in many museums and galleries in Greece and abroad and he has also worked on various book illustrations.

The National Gallery of Kosovo, formerly known as the Kosova National Art Gallery, is an art gallery situated at The University of Pristina Campus, right behind the National Library of Kosovo in Pristina, Kosovo, founded in February 1979. 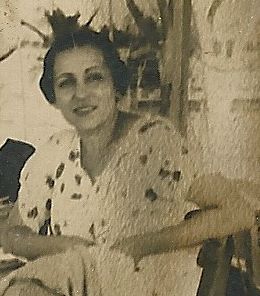 Eleni Zongolopoulou was a Greek painter. During her artistic career she followed the movements of Expressionism, Fauvism, Cubism and Abstract art. She was wife of the sculptor George Zongolopoulos. 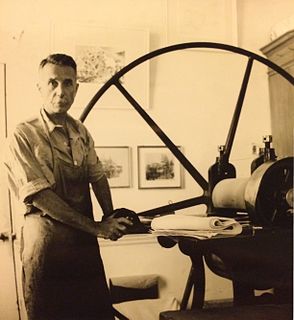 Nikos Ventouras was a Greek artist and engraver.

Pavlos Samios is a Greek painter and professor at the Athens School of Fine Arts.

Alexis Akrithakis was a Greek contemporary artist renowned for his paintings and wooden constructions. His works have been described as "speaking an unmistakable language. They stand on their own and are original, but are yet influenced by the particular Zeitgeist - between Arte Povera and Actioninsm".