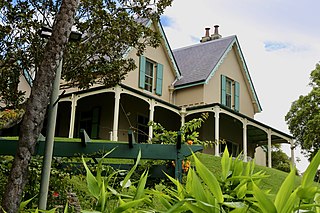 The Chaser election specials are a number of Australian political satire based comedy programs produced by The Chaser. The shows, which have run under various titles, provide commentary on Australian federal election and has been produced since 2001 for ABC TV. The first show, The Election Chaser in 2001 was the first ever television production of the Chaser team. In 2004 and 2007 they produced The Chaser Decides which won the Logie Award for "Most Outstanding Comedy Program" for the 2004 series. In 2010, the Chaser team produced a 5-episode series about the 2010 election, called Yes We Canberra!. A new series was produced for the 2013 election, called The Hamster Decides.The Chaser’s Election Desk aired in the six weeks prior to the 2016 federal election.

Gorokan is a suburb of the Central Coast region of New South Wales, Australia. It is part of the Central Coast Council local government area. The word "Gorokan" means "The Morning Dawn" from the language of the Awabakal. There are two schools in the area, Gorokan Public School and Gorokan High School. Electricity was first brought to the area as a part of a £42,000 programme for electricity reticulation under the Brisbane Water County Council. Located on the shores of Lake Tuggerah, Gorokan has long been a holiday destination with the Quoy family first buying land in the area in 1923 where they built and rented a series of holiday homes. Other families such as the Gedlings built a holiday house on the Gorokan waterfront in 1956.

The 5th Annual TV Week Logie Awards were announced on Wednesday 26 March 1963 by TV Week. The award ceremony was to have taken place at the Chevron-Hilton Hotel in Sydney on 23 March 1963 and been broadcast on the Australian Broadcasting Corporation (ABC), with Tony Hancock and Marie McDonald as guest presenters, but Hancock cancelled his trip to Australia due to illness. The presentation ceremony was postponed until July on board cruise liner Changsha. This article lists the winners of Logie Awards for 1963:

The Hungry Ones was an Australian television mini-series. It was a period drama about a pair of husband and wife convicts trying to go straight, consisting of 10 30-minute black-and-white episodes, which aired on ABC. Unlike previous serials it was entirely taped and not done live.

The Isador Goodman Show is an early Australian television variety series. The series debuted on 6 November 1956 and ran into early September 1957, aired on Melbourne station HSV-7 and starred pianist Isador Goodman, with some episodes also featuring a guest vocalist. The series is notable as an early attempt at producing an Australian-produced variety series. The live 15-minute show aired at 7:15PM on Tuesdays, was preceded by a 15-minute newscast and followed at 7:30PM by American series Jet Jackson. When the series debuted, television was still fairly new to Australia, with local series production having just started, and locally produced series often aired on just a single station.

Picture Page was an early Australian television series which aired from 1956 to 1957 on ABC. It was hosted by Valerie Cooney.

The Ken Noyle Show is an Australian television series which aired on ABC. A half-hour variety series, in Sydney it aired on Thursdays, while in Melbourne it typically aired on Wednesdays.

Eric and Mary was an Australian television programme which aired in 1956. It was one of the earliest Australian-produced television series. It was an "informal programme with guest artists", likely an interview show, hosted by Eric Pearce and Mary Parker. It was broadcast on Melbourne station HSV-7. The station began broadcasting on 4 November 1956, and Eric and Mary debuted a few days later on the 7th.

The Home Show is an Australian television program which aired on Sydney station TCN-9 for about a year, from 1 November 1956 to 12 November 1957. Originally aired on Thursdays, it later moved to Tuesdays. It was replaced with Tuesday at One. The program, along with its replacement, was aimed at the housewives.

Australia Unlimited was an Australian television program, which aired from 1956 to circa 1961 on Sydney station ABN-2, with part of the run also being shown on Melbourne station ABV-2. The first episode of the series aired 7 November 1956. The series moved time-slot and day of broadcast several times. Ron Powell hosted the series for part of the run. Originally 30 minutes, it later became a 15-minute show. It was one of the first series produced by the ABC.

Sydney Tonight was an Australian television variety series which aired from December 1956 to early 1959 on Sydney station ATN-7. Originally compered by Keith Walshe, it was later hosted by Roy Hampson and re-titled Tonight. The series featured a format including guests, interviews, audience participation, and music. Like In Melbourne Tonight, which came later, it was patterned on the groundbreaking U.S. series Tonight Starring Steve Allen.

Say It with Music was an early Australian television series. It aired on Sydney station TCN-9 from 21 February 1957 to 15 April 1958. Hosted by pianist Frank Lawrence and his wife, Marie Lawrence, the series was a variety show.

Let's Dance was an early Australian television series. The 15-minute series ran weekly from 25 March to 23 September 1957, and aired on Melbourne station HSV-7.

An Evening With was an Australian television series which aired from 1966 to 1967 on Canberra station CTC-7. Hosted by David Brice and broadcast monthly, the series was a variety show, and featured both Canberra-based and interstate talent. Little Pattie appeared as the main performer in a 1967 episode.

Canberra Week is an Australian television series which aired only in Canberra.

Campaign for One is a 1965 Australian television film. A remake of an episode of the BBC series Wednesday Play, it aired in a 60-minute time-slot on ABC on 24 November 1965 as part of Wednesday Theatre.

At Home with David Jones is an Australian television series which aired from 1963 to 1964 on Canberra station CTC-7. It was among a small number of television series produced in that state during the 1960s, and was among the earliest such series. The series was about cooking and interior decorating. "David Jones" was not a person on the series, rather it referred to the name of the sponsor.

The Magic Gum Tree is a musical comedy written in 1932. The score and lyrics are the singular work of Adelaide pianist and composer Arline Sauer in 1932. Sauer, born Arline Estelle Lower, married her longtime mentor, the well known Sydney conductor, arranger and composer Charles Sauer in May 1924, had twin sons 1925, divorced 1947.