A tonnage tax is a taxation mechanism that can be applied to shipping companies. The tax is determined by the Net tonnage of the entire fleet of vessels under operation or use by a company. It is on the basis of this variable that taxation is applied.

Given that the tax perceived is independent from the volume of material transported and from the operating profit of a shipping company, it is less complex to manage for tax authorities and shipping companies. This method of taxation is based on an objectively measurable variable - net tonnage - by independent certifying bodies that determine the transport capacity of the vessels. Under current international practice, tonnage tax regimes are used to incentivise the modernisation and improved environmental performance of merchant fleets.

The first country to introduce a tonnage tax was Greece back in 1957. [1] Today, tonnage tax rules are applied in many countries, including 18 EU countries. The latest tonnage tax regime to have received the approval of the European Commission is the Maltese tonnage tax scheme on 19 December 2017. [2]

Tonnage is a measure of the cargo-carrying capacity of a ship. The term derives from the taxation paid on tuns or casks of wine. In modern maritime usage, "tonnage" specifically refers to a calculation of the volume or cargo volume of a ship. Tonnage should not be confused with displacement, which refers to the actual weight of the vessel. Tonnage is commonly used to assess fees on commercial shipping. 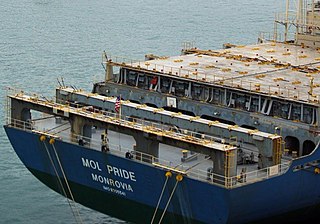 Flag of convenience (FOC) is a business practice whereby a ship's owners register a merchant ship in a ship register of a country other than that of the ship's owners, and the ship flies the civil ensign of that country, called the flag state. The term is often used pejoratively, and the practice is regarded as contentious. Each merchant ship is required by international law to be registered in a registry created by a country, and a ship is subject to the laws of that country, which are used also if the ship is involved in a case under admiralty law. A ship's owners may elect to register a ship in a foreign country which enables it to avoid the regulations of the owners’ country which may, for example, have stricter safety standards. They may also select a jurisdiction to reduce operating costs, bypassing laws that protect the wages and working conditions of mariners. The term "flag of convenience" has been used since the 1950s. A registry which does not have a nationality or residency requirement for ship registration is often described as an open registry. Panama, for example, offers the advantages of easier registration and the ability to employ cheaper foreign labour. Furthermore, the foreign owners pay no income taxes.

The United States Maritime Commission (MARCOM) was an independent executive agency of the U.S. federal government that was created by the Merchant Marine Act of 1936, passed by Congress on June 29, 1936, and replaced the United States Shipping Board which had existed since World War I. It was intended to formulate a merchant shipbuilding program to design and build five hundred modern merchant cargo ships to replace the World War I vintage vessels that comprised the bulk of the United States Merchant Marine, and to administer a subsidy system authorized by the Act to offset the cost differential between building in the U.S. and operating ships under the American flag. It also formed the United States Maritime Service for the training of seagoing ship's officers to man the new fleet.

The Norwegian Shipping and Trade Mission (Nortraship) was established in London in April 1940 to administer the Norwegian merchant fleet outside German-controlled areas. Nortraship operated some 1,000 vessels and was the largest shipping company in the world. It made a major contribution to the Allied war effort. 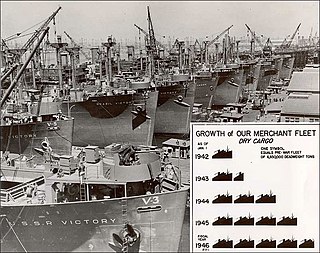 The War Shipping Administration (WSA) was a World War II emergency war agency of the US government, tasked to purchase and operate the civilian shipping tonnage the US needed for fighting the war. Both shipbuilding under the Maritime Commission and ship allocation under the WSA to Army, Navy or civilian needs were closely coordinated though Vice Admiral Emory S. Land who continued as head of the Maritime Commission while also heading the WSA. 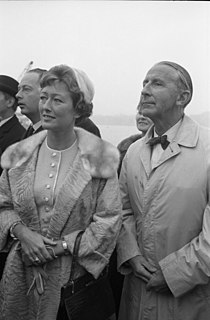 Erling Dekke Næss was a Norwegian shipowner and businessman. Brother of philosopher Arne Dekke Næss, his nephew was the mountaineer and businessman Arne Næss Jr. Best known for his early adoption of flags of convenience, Næss was Deputy Head of Nortraship's New York office from 1942 to 1946. Næss was the initiator behind the OBO carrier. He is also credited as proposing the very successful Norwegian International Ship Register, which allowed Norwegian shipowners to compete on an equal footing with flags of convenience.

A merchant navy or merchant marine or mercantile marine is the fleet of merchant vessels that are registered in a specific country. On merchant vessels, seafarers of various ranks and sometimes members of maritime trade unions are required by the International Convention on Standards of Training, Certification and Watchkeeping for Seafarers (STCW) to carry Merchant Mariner's Documents.

The history of shipping in Cyprus traces back hundreds of years. Its geographical position at the crossroads of Europe, Asia and Africa as well as its proximity to the Suez canal has historically favoured merchant shipping as an important industry for this European island state. As of 2005 Cyprus holds the 9th largest merchant navy in the world and the 3rd largest in the European Union.

Taxes provide the most important revenue source for the Government of the People's Republic of China. Tax is a key component of macro-economic policy, and greatly affects China's economic and social development. With the changes made since the 1994 tax reform, China has sought to set up a streamlined tax system geared to a socialist market economy.

The Grimaldi Group is a private shipping company owned by Gianluca and Emanuele Grimaldi and based in Naples, Italy. Grimaldi operates a large fleet of ro-ro vessels.

The Hong Kong Shipping Register was set up in 1990 under the Hong Kong Merchant Shipping (Registration) Ordinance, administered by the Marine Department. Since the transfer of sovereignty by the United Kingdom in 1997, Hong Kong is authorised under the Basic Law by the Government of the People’s Republic of China, using the name “Hong Kong, China” to maintain a separate ship registration system.

The port of Hong Kong is a deep water port located in southern China. It is one of the hub ports serving the South-East and East Asia region, and is a gateway to mainland China. The city of Hong Kong began as a colony of the United Kingdom. It was a free port, and became an international trade center connecting land and sea transport between China and other countries. The port has mature infrastructure and well-developed air-sea-land transport. It helps Hong Kong maintain its position on international trade centre and transshipment hub.

The Erika legislative packages of the European Union are maritime laws intended to improve safety in the shipping industry and thereby reduce environmental damage to the [ocean]s.

Greece is a maritime nation by tradition, as shipping is arguably the oldest form of occupation of the Greeks and has been a key element of Greek economic activity since ancient times. Today, shipping is the country's most important industry worth $21.9 billion in 2018. If related businesses are added, the figure jumps to $23.7 billion, employs about 392,000 people, and shipping receipts are about 1/3 of the nation's trade deficit. In 2018, the Greek Merchant Navy controlled the world's largest merchant fleet, in terms of tonnage, with a total DWT of 834,649,089 tons and a fleet of 5,626 Greek-owned vessels, according to Lloyd's List. Greece is also ranked in the top for all kinds of ships, including first for tankers and bulk carriers.

Excel Maritime Carriers Ltd. is a shipping company specializing in the transport of dry bulk cargo such as iron ore, coal and grains, as well as bauxite, fertilizers and steel products. As of May 2009, it is the largest bulk carrier by dwt of any U.S.-listed company. Approximately one-third of all seaborne trade is dry bulk related. Excel Maritime was a component of the NYSE Composite Index and the PHLX Marine Shipping Index. The stock has been de-listed from the exchanges as per their rules of listing

John A. Gauci-Maistre was born in Sliema in 1947, the son of the late Judge Agostino Gauci-Maistre and Winnifred Mifsud. He attended the St. Aloysius College in Malta and after completing his studies he swiftly moved into a business career in the U.K. During his employment in London with Southwell & Tyrrel he became acquainted with managerial and accounting aspects of business. After a few years in the U.K. he moved back to Malta and immediately became a business partner in the management of Penta Hotel in Paceville. This experience further ingrained in him an entrepreneurial spirit that he soon used in the setting up of companies that are not only household names in Malta in their respective industry but are synonymous with Gauci-Maistre.

EUKOR is a specialised Roll-on/roll-off shipping line formed in 2002. The company's main business is the sea carriage of new and used cars and High and Heavy cargo.