After being on Chelsea's books as a schoolboy, he joined Torquay United as an apprentice in 1995. He made his debut as a substitute, at the age of 16, on 9 September 1995 against Cardiff City at Ninian Park (a debut described briefly in Garry Nelson's seminal book about life in the lower divisions of English football, Left Foot in the Grave). Signing professional on 28 July 1997, he soon established himself as a first-team regular with his pace and ability attracting attention from Premier League sides, which included him training with Sheffield Wednesday for a spell on the recommendation of Chris Waddle, followed by Torquay turning down a bid [2] of £50,000 from Wednesday.[ citation needed ]

He started the 2000–01 season with an injury, only managing five goals in a disappointing season all round for the "Gulls". Despite this, he was still in demand from other clubs. [3] [4] In September 2000, Torquay turned down a £200,000 offer from a first division side, thought to be Oxford United, just after he had returned from a week on trial at Sunderland. [3] In December 2000, Rochdale offered £150,000 to Torquay for Bedeau, though he decided against the move. [4]

In May 2001, he agreed to an extension of his contract until 2003. After a poor start to the following season he was transfer-listed, along with fellow forward David Graham, by new manager Roy McFarland [5] and in January 2002 he joined first division Barnsley F.C. on loan [6] playing three times as a substitute for the Oakwell side. He returned to Torquay, regaining his place in the first team and played a major role in Torquay securing automatic promotion in 2004, playing in a variety of positions. He was awarded a testimonial by the club in the 2005–06 season, finishing the season as the leading goalscorer, before moving to League Two rivals Walsall on 24 May 2006. [7]

Bedeau struggled to establish himself at Walsall, scoring once against Shrewsbury, [8] and was allowed to join Bury on loan in February 2007. [9] He was transfer listed at the end of the 2006–07 season, [10] and rejoined Torquay United in June 2007 on a 12-month contract. [11] He struggled to reestablish himself at Torquay and was loaned to Weymouth in March 2008. [12] He played nine times for Weymouth, scoring once, against Farsley Celtic, [13] and was released by Torquay at the end of the season. [14]

On 9 August 2008, Kingstonian announced that they had signed Bedeau on a free transfer. [15] He played in the first four games of the season, scoring once, before his time with Kingstonian was put on hold as he had a number of issues to deal with in Torquay. [16] Bedeau played again for Kingstonian on 5 March 2009. [17]

His last registered club was Kingstonian. Since he left them in 2009, he has been available as a free agent. Bedeau is probably most known best for his long stint with Devon club, Torquay United where he served a number of years as a player.

Ryan Robert Jarvis is an English semi-professional footballer who plays as a midfielder for King's Lynn Town. Jarvis has represented England at under-16, under-17 and under-19 levels. 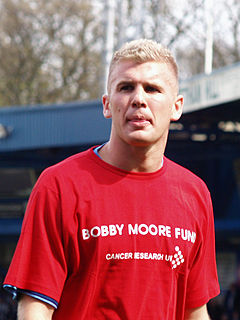 Andrew Jamie Bishop is an English semi-professional footballer who plays as a striker for National League North club Stalybridge Celtic.

Taiwo Leo Awounda Atieno is an English-born Kenyan former footballer. He previously played in the Football League for Walsall, Rochdale, Chester City, Darlington, Torquay United and Barnet and in the USL First Division for the Puerto Rico Islanders and Rochester Rhinos. He first appeared for the Kenya national team in June 2009, and is currently employed as an intermediate coach at the FA.

Craig Aaron Rocastle is an English-born former Grenadian international footballer. He is a cousin of the late England and Arsenal midfielder David Rocastle.

Marcus Glenroy Richardson is an English former professional footballer. He played as a forward, usually in the target man role. 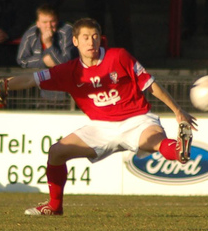 Anthony Francis Lloyd is an English footballer who plays for North Ferriby United as a defender. He played over 60 games in the Football League for Huddersfield Town and Torquay United as well over 40 games for York City in the Conference Premier. 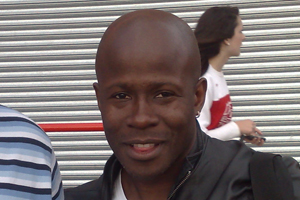 Paul Anthony Hall is a retired footballer. He is currently an EDS Under 23's lead coach at Championship club Queens Park Rangers. During his career, Hall was a striker who could also play on the right wing. Born in Manchester, England, he represented Jamaica internationally.

Jonathan George Boardman is an English former professional footballer who most recently was a joint player-manager at Hungerford Town. 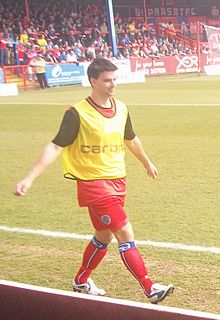 Timothy "Tim" Sills is an English former professional footballer who played as a striker. He is currently manager of Hamworthy United. 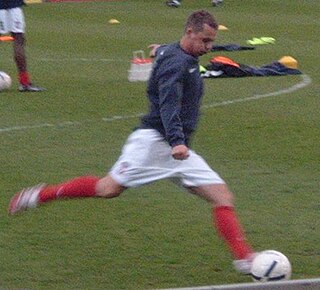 Mark Peter Convery is an English football manager and former footballer. Since November 2015, he has been manager of Newcastle Benfield.

Scott Benjamin Laird is an English professional footballer who plays as a left back for Southern League Premier Division South club Weston-super-Mare. He is also the club's assistant manager. 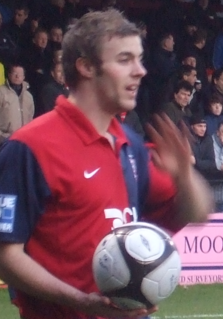 Kyle Adrian Ross Critchell is a footballer who plays for Dorchester Town as a defender.

Robert Ainsley Wolleaston is an English retired footballer who last played for Harrow Borough. He is a midfielder.

The 2007–08 season was Torquay United's first season in the Conference National after being relegated from League Two. The season runs from 1 July 2007 to 30 June 2008.

Billy Rodney Kee is an Northern Irish footballer who plays for Southern League Premier Division Central side Coalville Town, where he plays as a forward.

Michael Paul Trevor Bostwick is an English professional footballer who last played as a defender for League One club Lincoln City. He has played in the English Football League for Stevenage and Peterborough United.