James Anthony (Tony) Binns (born 1948 in Greater Manchester) [1] is the Ron Lister Professor of Geography at the University of Otago in New Zealand.

Binns' prime interest is African community development and the livelihoods and wellbeing of Africans. His early work was in Sierra Leone, working from Kayima in the north east of the country on links between diamond mining and the farming sector, the two main occupations of local residents. He has continued to follow these trends since 1974, and in 2014 he was elected an honorary chief of Kayima for his continued support to the community. [3]

Since then he has worked in

He has also worked in

Sierra Leone, officially the Republic of Sierra Leone, informally Salone, is a country on the southwest coast of West Africa. It is bordered by Liberia to the southeast and Guinea to the northeast. Sierra Leone has a tropical climate with a diverse environment ranging from savanna to rainforests, a total area of 71,740 km2 (27,699 sq mi) and a population of 7,092,113 as of the 2015 census. The capital and largest city is Freetown. The country is divided into five administrative regions which are subdivided into sixteen districts.

A greenbelt is a policy and land use zone designation used in land use planning to retain areas of largely undeveloped, wild, or agricultural land surrounding or neighboring urban areas. Similar concepts are greenways or green wedges which have a linear character and may run through an urban area instead of around it. In essence, a green belt is an invisible line designating a border around a certain area, preventing development of the area and allowing wildlife to return and be established.

Africanus Horton (1835–1883), also known as James Beale, was a Krio African nationalist writer and an esteemed medical surgeon in the British Army from Freetown, Sierra Leone. 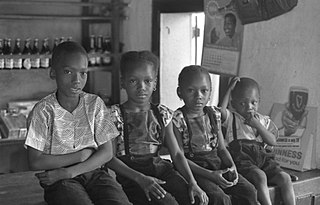 The Temne people, also called Atemne, Témené, Temné, Téminè, Temeni, Themne, Thimni, Timené, Timné, Timmani, or Timni, are a West African ethnic group. They are predominantly found in the Northern Province of Sierra Leone. Some Temne are also found in Guinea. The Temne constitute the second largest ethnic group in Sierra Leone, at 31.6% of the total population, which is slightly less than the Mende people at 32.2%. They speak Temne, a Mel branch of the Niger–Congo languages.

Kasewe Forest Reserve is an area of hills in the Moyamba District of Sierra Leone. It is designated as a forest reserve and contains moist semi-deciduous and evergreen forests that cover an area of 1.224 km². Made up of volcanic rock the hills stand about 500m above the interior plains of the country. The nearest town is Lunsar.

Paul Richards is an emeritus professor of technology and agrarian development at Wageningen University, The Netherlands, and adjunct professor at Njala University in central Sierra Leone. He was formerly a professor in the Department of Anthropology, University College London for many years, and previously taught anthropology and geography, at the School of African and Oriental Studies, University of London and the University of Ibadan, Nigeria.

Chris Mahony is a former rugby union player for the Auckland Air New Zealand Cup team, playing fullback centre or wing. He played for Oxford University where he has completed a Masters in African Studies and a DPhil in Politics.

Christopher Fyfe was a Scottish historian most noted for his work on Sierra Leone in West Africa.

George William Wright was an Anglican Bishop in Africa in the mid-20th century.
He was born in born on 17 December 1873, educated at Barnsley Grammar School and ordained in 1906 following a 15-year career as a civil servant. After a curacy at Christ Church, Derby he went as a CMS missionary to Mombasa where he remained in various capacities until 1921 when he returned to England as Vicar of Boulton. In 1923 he was consecrated Bishop of Sierra Leone and in 1936 of North Africa. He was Vicar of Templecombe from 1942 to 1951 and an Assistant Bishop in the Diocese of Bath and Wells. He died on 11 August 1956 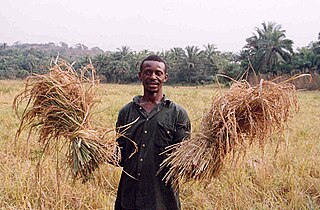 Agriculture in Sierra Leone is a significant part of the economy of Sierra Leone, with it accounting for 58 percent national Gross Domestic Product (GDP) in 2007. Two-thirds of the population of Sierra Leone are involved in subsistence agriculture.

The Sierra Leone Grammar School was founded on 25 March 1845 in Freetown, Sierra Leone, by the Church Mission Society (CMS), and at first was called the CMS Grammar School. It was the first secondary educational institution for West Africans with a European curriculum. Many of the administrators and professionals of British West Africa were educated at the school. 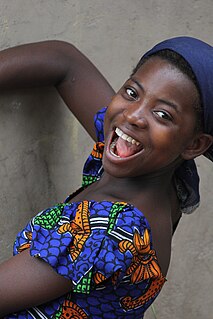 The following is a timeline of the history of the city of Freetown, Sierra Leone.

Robert B. Potter was a British academic geographer, focussing on urbanisation and development issues in the Caribbean. He was Emeritus Professor at the University of Reading, UK.

The following is a timeline of the history of the city of Ibadan, Oyo State, Nigeria.

Orishatukeh Faduma was an African-American Christian missionary and educator who was also an advocate for African culture. He contributed to laying the foundation for the future development of African studies.